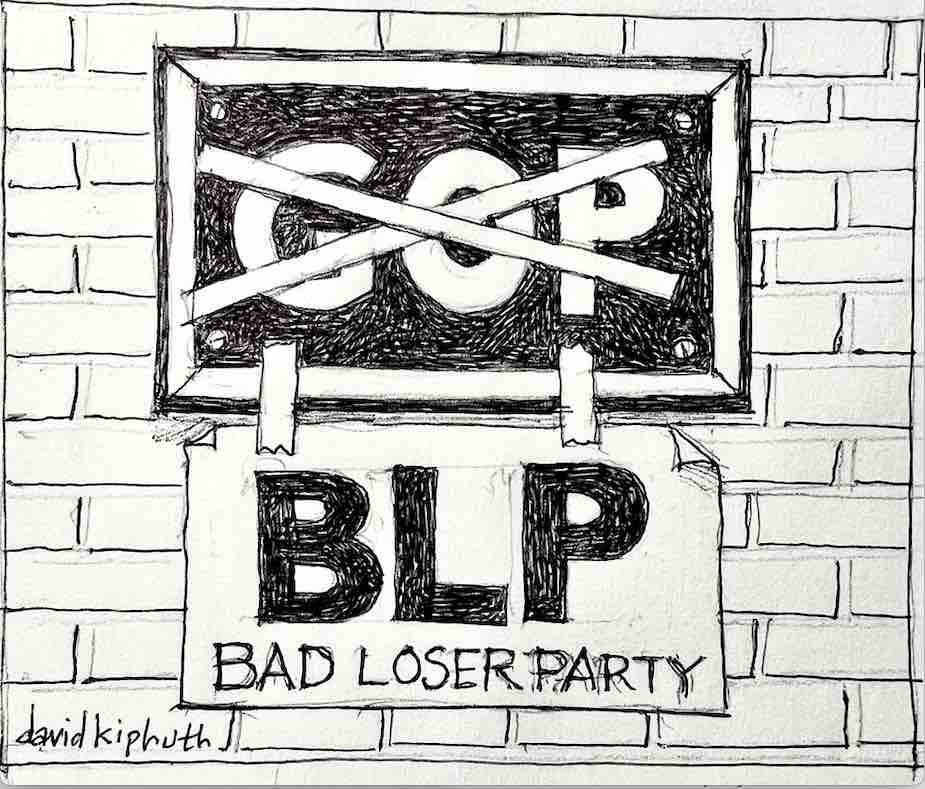 David Kiphuth is a new contributor to ThisCantBeHappening! He will be contributing his own political cartoons to the site and will also be working with our writers on illustrations for article illustrations like this one today.

We need to start calling the Republican Party by a new nickname that more accurately reflects what it has degenerated into.

For well over a century the party of Abraham Lincoln has been referred to as the GOP — especially by the news media, whose editors love appellations that allow for shorter headlines — instead of Grand Old Party.  (According to one account, the initials were first substituted by a T.B. Dowden, a typesetter at at the Cincinnati Gazette, who found he couldn’t fit the words Grand Old Party into the last line of a quote of the speech by a Republican presidential candidate which ended a late-filed story about a Presidential candidate. Asking what he should do was told  by his foreman, “Abbreviate ’em, use initials, do anything but hurry up!”  And so he substituted the letters GOP.0

That name, Grand Old Party, and the shorter GOP version that was appropriated by the party amounted to an early example of branding by Republicans, and I suppose that given early Republican support for an end to slavery during the Lincoln presidency, GOP once made some sense. But over the years, the Grand Old Party has become something quite far from  ”Grand.”

This now debauched, seedy organization is the party of much of corporate America and of the billionaire class as well as of assorted wannabe Nazis, gun nuts and Christian fascists.  Since the Johnson administration’s promotion and enactment  of the Civil Rights Act, and the Nixon and Reagan administrations’ embrace of the religious right, this Republican Party has replaced the Democrats as the party of overt white racism, unrestrained capitalism, anti-unionism and willful know-nothing, anti-science ignorance.

There’s nothing ‘grand’ anymore about this old party.

With the advent of President Donald Trump (who,, you’ll recall  lost the popular vote in 2016), and the rise of his cult following, we have the answer though. It came to me first as I watched the two leading candidates in a crowded race this past May for the Pennsylvania Republican Party’s nomination for a US Senate seat being vacated by incumbent Republican Pat Toomey. Two millionaires, Mehmet Oz, quack host of the “Dr. Oz” TV program, and hedge-fund manager David McCormick, both pro-Trump 2020-Biden-victory-denying candidates (Oz with Trump’s endorsement) ended up the top two candidates, receiving 31.2% and 31.1 % of the vote respectively.

During the recount that they demanded, both candidates, like their hero Trump, spent the over six weeks of subsequent  meticulous counting and recounting of machine and paper ballots decrying “election fraud,” not a shed of which was shown to have existed. Oz eventually won by the same percentage initially reported, and McCormick eventually conceded.

Then I saw an AP article  in which losing Trump-endorsed candidates — even ones who were trounced badly — similarly  immediately began spouting unsupported “We wuz robbed” allegations of electoral fraud and rigged counting — and this was mostly supposed to have occurred in counties where the whole election machinery is in the hands of Republican officials!

Go figure, but there’s a method to this seemingly mad behavior.

Suddenly it came to me:  The Republican Party has become a bunch of whining white (mostly male) losers who know that their electoral base is composed of people who sense that their long-held position as the dominant demographic in the US is ending.  Desperate, they need to cheat.

What we need to do is rebrand to stop this attack on what vestigial democracy the US still has and to start referring to the Republican Party as the BLP instead of the GOP.

Think about it:  How many people would want to belong to or to support an organization of “bad losers”?  Americans, for better or worse, love winners, mock losers, and disdain bad losers.

Our US elections are hardly perfect. In a media-driven society, state election officials are pressured by media organizations to come up with quick election results, reported if possible within hours or even minutes of polls closing. If they can’t deliver,  that’s okay too, as it keeps voters  on the edge of their seats through a night of mind-numbing commercials. If a race is close or goes into a recount, all the better  for viewership and ad revenue. (In other countries, many of which still use paper ballots that are hand counted, people are used to waiting for results that are supposedly final and accurate.)

The BLP, beginning with Donald Trump in 2016,  figured out that, as the party of a demographic — older white non-urban or suburban and mostly male and poorly educated voters — that is in terminal decline, its candidates, even before election day, need to attack the very idea of the integrity  of voting, so now these bad losers are trying to change voting rules in states where they can, with the deliberate goal of to keeping as many likely Democratic voters = and especially voters of color, as possible from even being able to vote.

We cannot stop this strategy in states run by Republicans, but we can defeat it by both voting like we used to when people of color were just winning the right to vote, or when issues like the War in Vietnam were encouraging people to vote for genuine peace candidates. We are in a similar time when even if the choice between candidates seems meager, there are candidates who are more likely to deal with the country’s and the world’s most pressing crises than their opponents, and where those opponents are out and out fascists.

We can also use humor to our advantage because the BLP’s candidates lately are such a truly laughable bunch of people: charlatans, Q-anon cultists, flat-earth illiterates, people who got into college as “legacy” brats thanks to their alumni parents’ big donations to the old school, and because BLP candidates as a group target ignorant or fanatic voters using “wedge” issues like gun rights or opposition to abortion.

It would help if we started calling the Republican the BLP — the Bad Losers Party — now, so that when their candidates lose and turn to condemning the validity of an election, the default response, among the public and the media, will be laughter!

DAVID KiPHUTH has been a professional artist and illustrator since 1969. He has illustrated books on fishing and archaeology, as well as essays, historical documents and Curatorial publications, and was for 15-years Editorial/Opinion Illustrator for the Daily Gazette in Schenectady, NY.  He is generously offering to wield his talented pen on this site.