Donald Trump’s narcissistic, authoritarian instincts and the man’s clear admiration of Vladimir Putin’s gangster-capitalist leadership style makes me think of archetypal killers. During his campaign for president he spoke often of killing; he would anonymously refer to some of his business friends as “real killers,” which was meant as a compliment on their skills and effectiveness. There was the remark he could shoot someone on Fifth Avenue and get away with it. Lately, it’s his public intervention in military discipline issues lionizing Seal Team Chief Petty Officer Edward Gallagher, who’s accused of being an overly enthusiastic killer. 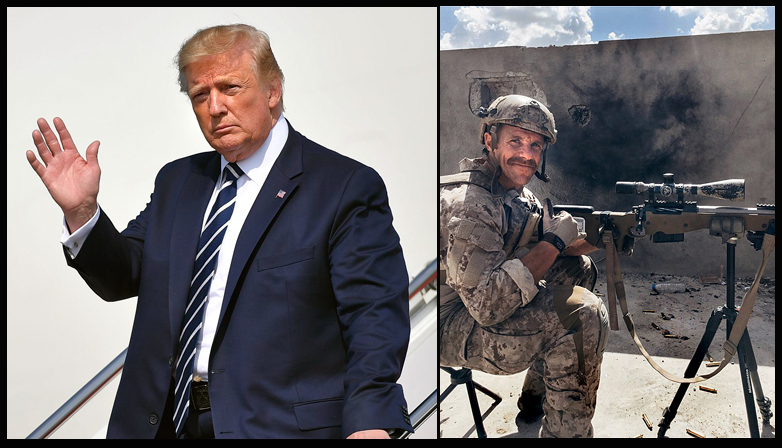 This is not so unusual, of course, since Mr. Trump is a bona fide creation of American culture and we tend to revere killers in this culture. Richard Slotkin wrote a powerful trilogy of books on this aspect of American history beginning with Regeneration Through Violence: The Mythology of the American Frontier, 1600 – 1860. The final book, Gunfighter Nation, covers the 20th century.

“In American mythogenesis the founding fathers were not those eighteenth-century gentlemen who composed a nation at Philadelphia. Rather, they were those who . . . tore violently a nation from the implacable and opulent wilderness. . . . Their concerns, their hopes, their terrors, their violence, and their justifications of themselves . . . are the foundation stones of the mythology that informs our history.” Thus his thesis: “the myth of regeneration through violence became the structuring metaphor of the American experience.” That is, when America hit a snag or a problem, look out, violence was coming.

Martin Scorcese’s latest (and maybe greatest) gangster movie, The Irishman, is a three-and-a-half-hour paean to the killer in urban America. Robert DeNiro is Frank Sheeran, a made mob killer who’s always algebraically calculating on which side his bread is buttered. The core drama of this gangster epic is how and why Sheeran ends up whacking his good friend Jimmy Hoffa. 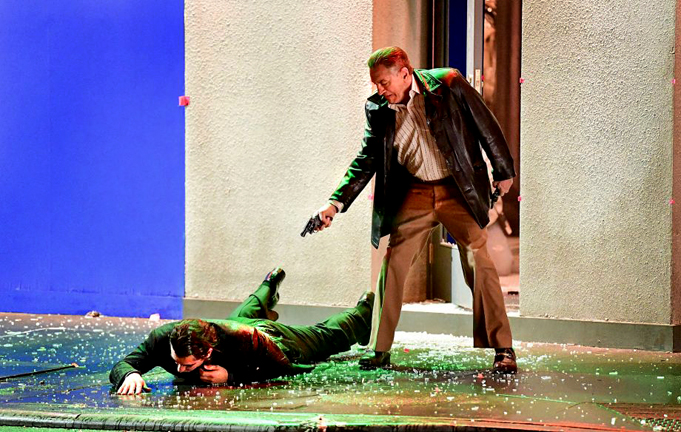 Besides its epic drama, the film is a long You Tube how-to lesson in the finer points of knocking somebody off: One, clear the hit with the bosses; two, plan as much as possible to encounter your target in an out-of-the-way place; and three, if you know the victim, walk right up to him, exchange pleasantries and shoot him point blank two or three times in the head with a small, snub-nosed .38. Then you pop off a couple quick shots at the prone, twitching body to seal the deal. Finally, you fling the weapon into the nearest river.

There used to be a code in Hollywood movies that the ending must comport with the idea that crime doesn’t pay. In our age of open-secret corruption, that code no longer prevails. In this case, Sheeran does some jail time for “bullshit” crimes, which is part of the swaggering lifestyle. But they never get our man for murder. The sentence he suffers is permanent alienation from his beloved daughter Peggy who will never speak with him again. The film ends with our urban American killer in a wheelchair ignominiously facing his own death alone in an old-folks home in Philadelphia. He never gets to see how he’s immortalized by Scorsese and Netflicks, which financed the film.

From Edward G. Robinson as Little Caesar to Paul Muni and Pacino in two versions of Scarface, the gangster killer has fascinated American culture almost as much as the mythic western gunfighter immortalized from John Wayne to Clint Eastwood. Today, our favorite killers tend to be divided into protagonists and the antagonists we engage with in our foreign wars; think the popularization of people like Edward Gallagher as lionized good-guy killers and an ISIS member as demonized bad-guy killer. in the public imagination they fuel each other.

Donald Trump may be, according to a psychiatrist interviewed by Lawrence O’Donnell recently, a man who thinks in a “simple”, “primitive” and un-empathetic way that was established when he was quite young; one thing he’s particularly good at is couching everything in a cultural fashion that aligns with his narcissistic mind. No one knows better than he does how important the killer is as an American archetype. Beyond this archetypal/mythic reality, Trump clearly understands what a critical tool killers can be in the pursuit and retention of power.

Chief Petty Officer Edward Gallagher, from the stories told about him, is a man who’s good at killing people. His teammates have reported being concerned about his indiscriminating appetite for killing civilians — so much so that one teammate reportedly messed with his sniper rifle’s telescopic sight so he’d miss his targets. The Navy itself was ready to throw Gallagher out of the elite Seals for his homicidal inclinations, specifically his gratuitous knifing of a captive teenager suspected of ISIS connections and, later, his posing with the corpse. The message Trump sends with his endorsement of Gallagher is in line with Trump’s clear admiration of successful despots like Vladimir Putin, Kim Jong Un, Rodrigo Dutarte and Mohammad bin Salman bin Abdulaziz Al Saud — all of whom are known for knocking off people. Just this week the German government linked the Russians with knocking off a Chechnyan fighter in Germany.

Some people take pleasure in killing. I recall in the 1980s listening to a lecture by a federal attorney who had wiretapped a Philly mobster, possibly someone in Frank Sheeran’s orbit. The man had just killed someone in an intimate manner and was recounting the act on the phone; he said killing the man had been so pleasurable he wished he could bring him back to life so he could kill him again.

While the US military has a lot of moral baggage to deal with from places like Vietnam, Iraq, etc, it’s correct and honorable in wanting to rid itself of someone like Chief Gallagher. But, then, there’s the world of private mercenary operations like Blackwater that would hire Edward Gallagher in a heartbeat — for a better salary than he gets in the Navy. One can’t help wondering whether a Donald Trump acquitted by the Senate and re-elected would feel encouraged enough to expand such off-the-books operations into sophisticated, under-the-radar operations modeled on Putin’s use of killers in his gangster capitalism. In The Irishman, one of Sheehan’s first experiences as a killer is in a scene from the war in Europe when he’s delegated to force two Nazi soldiers to dig their own grave — at which point he shoots them dead into the grave. Over the scene, Sheehan narrates how perplexed he was that they would so passively dig their own graves.

In The Irishman, Al Pacino plays Jimmy Hoffa in such a blustery, loud way that it reminded me of Donald Trump. His Hoffa, just out of four years in prison, is so stubborn and so righteously determined to regain control of what he sees as “my union” that he alienates some big mobsters who, while they tend to like the man and his style, wish he would relax, enjoy his pension and accept that things have moved on; they’re afraid his obsession to regain his Teamster leadership role could potentially affect them in negative ways. Thus, as this fictionalized saga would have it, Sheeran is delegated to whack his friend. As far as Hoffa goes, the film is a classic tragedy where a character’s own decisions lead inexorably to his tragic fall.

Is there a pattern metaphor here? One that applies to a narcissistic president unwilling to compromise or be pragmatic on anything, a man with immense power who doesn’t pay much attention to what’s going on outside his narrow orbit and, instead, stubbornly projects outward what happens to be going on in his head — no matter who it burdens or runs over? When might Mr. Trump become a liability to Republicans? At the UN last year and in London’s NATO meeting this week, he’s become the butt of jokes among world leaders. As things close in on him, despite Sean Hannity’s hagiographic media worship, one can only expect these problems to increase for the man and his reality TV show. Could his ratings plummet?

Like frustrated mobsters in a corrupt world concerned about their gang and their own power, as time moves forward and more rotten details become public, the possibility should not be precluded that at least 20 Republican senators might feel compelled to convict such a wounded and impeached president to save their sorry asses.