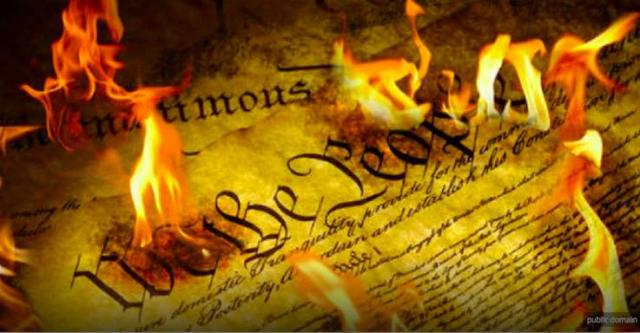 Most of the uproar, left and right, about the revelation — in both a NY Times anonymous opinion page article by a “high official” in the White House, and a new book by Bob Woodward — that there are top people working for President Trump who are actively trying to keep him from doing dangerous or reckless things out of ignorance or anger, has focused on the question of whether such actions constitute treason, or whether it validates the claim that a “Deep State” cabal of secret behind-the-scenes Machiavellians is working to subvert a duly elected president.

There are grounds for making both arguments, but I’d toss in a third.

Missing from most of these analyses is the reality that officials working for the White House, and indeed the entire US government, don’t take a vow or have any legal obligation to support a leader, or even to support the government or for that matter such a nebulous concept as the “country” or “nation” or the United States of America. Rather, like all members of the military, they take an oath to “uphold and defend” the Constitution of the United States.

That is a big difference.

If the person who wrote that piece in the Times, and those he refers to as also acting behind the Trump’s back to prevent disaster (for example the president’s call to invade Venezuela or, as reported by Woodward’s sources, to murder Syrian leader Bashar Assad, or just to kill more people in Afghanistan), they are acting to prevent the president from violating international law and the US Constitution. If they prevent him from firing Special Prosecutor Robert Mueller who is investigating him and his campaign, which would be obstruction of justice and a high crime under the Constitution, they are protecting that Constitution.

One could argue that someone who is convinced that this president is nuts, “off the rails,” and a petty narcissist who is letting his tender ego get the best of him, that person should have the courage to resign and go public with the complaint and the evidence. But if that person feels that doing so would not solve the problem because the Republican Party in control of Congress does not have the courage or will to control the president or to oust him, and thus the only way to prevent disaster is to stay in the shadows and try to prevent him from doing something truly terrible that could destroy constitutional government or launch a disastrous illegal war or some other such horror, who’s to say that’s a wrong decision?

The Deep State argument is a bit more complex. Certainly there are many people in the military, in the State Department, in the Justice Department, in the intelligence agencies and elsewhere, who believe that this president is a threat to the nation, to the Bill of Rights, to international law, and to basic decency, but there are also those who simply have agendas, both domestic and international, that are themselves dangerous. For example, there are the neo-conservatives and neo-liberals who both desperately seek enhanced confrontation and conflict with Russia, China and Iran, the better to increase military budgets and repressive controls over freedoms at home. There are also those, reportedly, and the Times opinion writer appears to be one, who consider themselves to be “real” conservatives who feel that Trump is betraying their cause and are thus working to keep him on the straight and narrow “real conservative” path of cutting federal spending on social programs, ending regulation of business, weakening environmental protection and worker rights, packing the courts, etc.

Both such proclivities are not so much about defending the Constitution as about pushing agendas which the president was not elected to push. Trump, remember, ran for president successfully by calling for better US relations with Russia. He also claimed to be concerned about the economic struggles of the working class (albeit only the white part of that working class). Both those campaign goals were and remain anathema to many Republicans, and it is clear that they have been working hard in Congress and — if the Times opinion article is to be believed — inside the White House, to promote those goals and undermine the president’s efforts, erratic as they may be, that are contrary to those goals.

If that is what this is all about, then critics like Glenn Greenwald of the Intercept are correct that we are in very dangerous waters as a kind of Deep State coup is underway, and Trump is being reduced to a figurehead consigned to house arrest in the White House and Mar-a-Lago. In that vein, I think one line in the op-ed piece published by the Times stood out to me as a kind of threat that, if I were Trump, would make me hire some very trusted private security team. It read: “So we will do what we can to steer the administration in the right direction until — one way or another — it’s over.”

It will take a while to figure out which of these situations best describes what is happening in what is clearly a totally dysfunctional White House, being run by a president who, incredibly, is missing a few screws and marbles, has great difficulty focussing, remembering what he’s done before, and understanding how the world works, and who has limited self-control, if any at all. It could be that all are at work: that the author and others like him/her are honestly trying to defend the Constitution, but are also engaged in trying to push Deep State and conservative agendas against the wishes, such as they are or can be deciphered, of the elected president.

To the extent that the author is defending the Constitution and the Bill of Rights, I say, “Right on!” but to the extent that it is either of the latter that is driving this campaign of bureaucratic sabotage in the executive branch, we are in deep danger.

One would think that Congress would be leaping to investigate all this, but don’t hold your breath. I think on the evidence of past responses to Trumpian madness, the Republicans in control of both houses will try to ignore it and hope it goes away to be replaced by the next Trump scandal or outrageous tweet.