Zika has been described as extraordinary in so many ways. But the only thing that’s really extraordinary about the whole thing is how incredibly dispassionate I am about it.

At this point, even extraterrestrials have probably heard that the World Health Organization declared the recent spread of the Zika virus an international public health emergency. That sounds pretty scary. It’s only the fourth time that the WHO has ever declared a PHEIC (Public Health Emergency of International Concern) so it seems like it ought to be a big deal.

However, it’s important to keep things in perspective. As of May 4, there were 1,278 confirmed cases of microcephaly, the birth defect linked to Zika virus infection that causes an abnormally small head and brain. There are approximately 250 suspected neonatal and fetal deaths. In comparison, the last PHEIC was the Ebola virus outbreak of 2014. The current total number of reported cases of Ebola is 28,616 causing 11,310 deaths. Finally, the WHO estimates that the annual run-of-the-mill flu season – not famous epidemics like the Swine Flu – causes 250,000 to 500,000 deaths every year around the world. 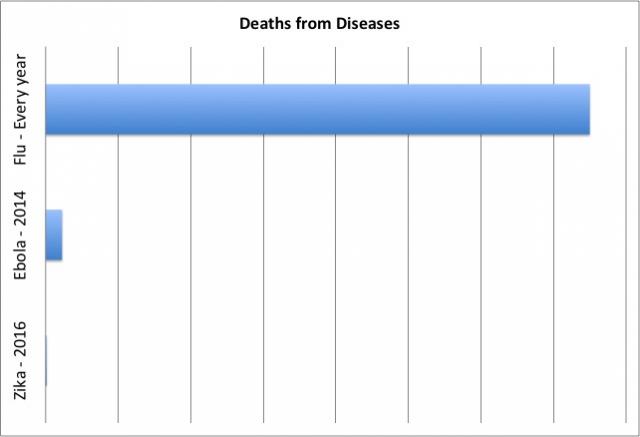 Illuminating Graph
I understand how Zika tugs on our heartstrings. Babies are precious, innocent, and full of potential. But I would like to point out that children are also precious and worth protecting and I have yet to see a media blitz or public outcry as passionate for the over 300,000 children who suffer from physical abuse every year in the United States alone.

So I’ve put to together my top three list of the facts that are actually extraordinary about the Zika PHEIC:

1) Very few people are talking about how the Zika virus will disproportionately affect poor women.

Despite the fact that viruses and mosquitos will attack humans regardless of how fancy their car is, poor communities suffer more from mosquito-borne illnesses. Communities of poverty have inadequate infrastructure that leads to a variety of ways that water can pool and mosquitoes can breed. Without running water, people are more likely to store water in basins and tanks. Shoddy, makeshift architecture creates areas where water can pool. Additionally, without glass windows and air conditioning, there are no barriers to mosquitos entering crowded dwellings.

Furthermore, unlike the mosquito that transmits Malaria, the mosquito that carries the Zika virus, Aedes aegypti, does most of its feeding during the day. This means that one of the cheapest preventative measures that has been used in the past, sleeping under a mosquito net, is ineffective.

In the United States, a rich country prone to hysteria, we continue to focus on the privileged while others go ignored. We fret about the possibility of Zika spreading to the Southern states while forgetting the fact that it has already spread to Puerto Rico. While not all of the citizens of Puerto Rico are poor, they are all uniformly disenfranchised and exploited by the US government.

Explaining how the Zika virus disproportionately affects women seems silly given how obvious it is, which is why its so incredibly strange that most of the coverage seems to portray this as a emergency for all members of society. In reality it’s more like hiccup for society and an emergency for some disadvantaged women.

El Salvador has handled the situation by advising all women to not get pregnant for the next two years. The CDC has recommended that because the virus can be transmitted through sperm, men who have had a symptomatic Zika virus infection (which by the way is very difficult to confirm so even mild cold symptoms could be Zika) not have sex for 6 months. These people have clearly taken a page out of the playbook of our “abstinence only” friends.

3) Few have actually used the Zika virus to address issues of substance such as access to healthcare.

I’m unmoved by Zika in the same way that I’m unmoved by school shootings. They are devastating events that I wish never happened. But I refuse to focus on these tragedies instead of focusing on the daily atrocities that we are blind to. It’s hard for me to get all fired up about one crazy person with a gun when there is a whole nation of police officers out there with guns actively shooting people everyday.

But I do think it’s worth leveraging moments that capture the collective consciousness to advocate for bigger issues.

Furthermore, the birth defects that are caused by Zika are not identifiable until the late second trimester, far beyond the gestational limit in most countries. In places where second trimester abortions are legal, typically access is so poor, it might as well be unavailable.

While a small number women’s health activists in Brazil are using Zika to improve abortion laws, there have been no such movements in other countries or internationally.

Let’s keep talking about Zika, but only if it’s in the context of catalyzing larger social change.