Hampton Coleman, a military veteran, felt secure in his constitutional free speech rights until a few weeks ago when three U.S. Marshals showed up at his Delaware home issuing demands Coleman considered threats.

Those U.S. Marshals, two male and one female from Philadelphia, came to Coleman’s home last month accusing him of sending a threatening letter to a federal magistrate judge.

“Why would I put my name and address on a letter containing a threat? I’m not crazy,” Coleman said during a recent interview.

Those Marshals warned Coleman to not send any more letters to U.S. Magistrate L. Felipe Restrepo.
Coleman claims the Marshals service is overreacting to his three-sentence, 28-word letter voicing concern about bias he felt Restrepo had exhibited in a race discrimination case handled by that judge, who ordinarily has a reputation for fairness.

Coleman attended an April 2011 hearing in that case.

Coleman said when he asked the three Marshals about his supposed Constitutional right to freedom of speech, “one of the marshals said “that’s an old document.” Coleman said that response startled him implying that the U.S. Constitution is “irrelevant.”

The five freedoms guaranteed in the First Amendment to the U.S. Constitution include barring the federal government from “abridging the freedom of speech” and from blocking “the right of the people…to petition the Government for a redress of grievances.”

Coleman’s chilling encounter with those Marshals comes at a time when some experts and individuals across America are raising alarms about actions by governmental entities which are eroding Constitutional rights under the cloak of counterterrorism. Recent actions include revelations about surveillance of activists by FBI agents, court rulings limiting Bill of Rights protections and recent congressional renewal of the rights- curtailing Patriot Act.

Persons attempting “to exercise their rights will often be forced to defend themselves against an increasingly inflexible and uncompromising government,” warns John W. Whitehead of The Rutherford Institute, a civil liberties organization, in a recent commentary. 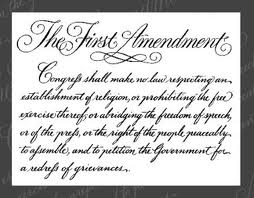 Paralleling what Whitehead sees as increasing strong-arm government tactics imploding constitutional freedoms is what commentator Paul Craig Roberts sees as an “indifference and even hostility to civil liberties” among too many American citizens. Roberts once served as an Assistant Secretary of the Treasury under President Reagan.

Hampton Coleman calls the Marshals visit and their order intimidating. “My wife thought they came to arrest me. She was scared to death.”

In a “Complaint of Misconduct” Coleman has filed against Judge Restrepo with federal judicial authorities Coleman stated Restrepo “made an intentionally inaccurate and false claim of a threat…and then employed the United States Marshals Service to retaliate, threaten and intimidate me for exercising” his First Amendment rights.

In early May 2011 Coleman sent a hand-written letter to Judge Restrepo, who is presiding over a race discrimination case filed by Coleman’s nephew. The nephew, Reginald Roberts, has filed an employment discrimination case against officials in Montgomery County, a predominately suburban area adjacent to Philadelphia.

Montco’s District Attorney fired Roberts in August 2008 after this decorated DA’s detective filed charges with the Pennsylvania Human Relations Commission (PHRC) complaining about nearly a decade of racist slights that included his forced assignment to a basement office filed with visible mold on the walls, an action that led to Roberts contracting tuberculosis.

Montco’s own Medical Director did not dispute the finding about Roberts’ TB he received from Roberts’ physican, who is a Professor of Medicine at the University of Pennsylvania, citing the. In an October 2008 letter from that Medical Director to Montco’s Solicitor the Director stated, “It is my professional opinion that Mr. Roberts should be eligible for heart and lung benefits.” Montco authorities improperly withheld the Medical Director’s assessment from Roberts for over a year delaying the payment of lung disease benefits recommended by their Medical Director.

Even though Montco DA Risa Vetri Ferman fired Roberts one day after the PHRC held a hearing on Robert’s complaint, she claims, rather improbably, that no retaliation existed between her firing of Roberts and his PHRC hearing.

Hampton Coleman sent his short letter of protest to Restrepo after attending a late April hearing in Restrepo’s downtown Philadelphia courtroom, where Coleman thought the judge had unfairly favored the Montgomery County officials by not requiring their lawyers to follow the same rules of providing specific proof that he had imposed on the lawyer representing Roberts.

During that hearing, for example, a lawyer for the county told Restrepo that Roberts’ poor job performance in 2007 had led to Roberts’ firing, not racism.

The county’s lawyer’s claim about the reason for Roberts firing is contradicted by the PHRC’s fact finding report, which supported Roberts’ discrimination complaint. This report stated that Montco officials had in fact praised Roberts as late as September 28, 2007 for his “dedication and record” as a police officer and detective.

Also during 2007, Roberts supervised a few complicated wire-tap cases, worked alone on another time-consuming wire-tap case and was on medical leave because of the office mold problem – all events legitimately explaining his low number of arrests in the period, which the lawyer had told Judge Restrepro was the foundation for the poor job performance charge against Roberts.

Judge Restrepo, during that April hearing, did not require Montco’s lawyer to provide any evidence documenting any of his assertions against Roberts though, in contrast, the judge required Roberts’ lawyer to provide both case law citations and the page numbers of documents filed in the court record – a disparity in treatment that Coleman considered unfair.

The three U.S. Marshals who later visited Coleman at his house told Coleman that Judge Restrepo considered his letter threatening, and that he had asked their office to investigate.

But Coleman, a retired postal worker, defended his letter. “It was not my intent to threaten the judge. My intent was to remind the judge that justice is supposed to be fair.”

One duty of the U.S. Marshals Service is providing protection for federal judges and prosecutors. Threats on federal judges escalated from 500 per year in 2003 to 1,278 in 2008.

Keeping judges safe is essential to proper court functioning and insuring that courts function free of intimidation is essential in a democratic society. However, there is a line between threats and legitimate criticism and curtailing free speech rights cripples a democracy.

America’s first president, George Washington, once said: “If freedom of speech is taken away then dumb and silent we may be led, like sheep to the slaughter.”

The entirety Coleman’s 28-word letter to Restrepo read as follows:

“Justice is supposed to be blind. Reginald A. Roberts is not the only one with his integrity on trial. We the people are watching and listening very carefully.”

Coleman and his supporters feel the Marshals’ visit and their order for Coleman to cease all contact with Restrepo is an attack on lawfully expressed opinion.

“This shows me an abuse of power by the judge and the Marshals. It’s like we’re living in Nazi Germany with the Gestapo,” Coleman said.

“You say something that someone does not like and they send the government after you.”

“It’s an open investigation and we have a strict policy of not commenting particularly when involving the federal judiciary,” said Jim Burke, a spokesman for the U.S. Marshals Service in Philadelphia.

Ironically, this seeming assault on Coleman’s free speech right regarding his communication with Judge Restrepo contains disturbing similarities with events surrounding the firing of his nephew following Roberts exercising his free speech right in filing complaints over enduring a litany of discriminatory abuses during eight-plus years as the only black among 36 Montco DA detectives.

For example, over two months before Roberts’ August 2008 firing, he sent a letter to his Chief of Detectives and other Montco officials complaining in part about “racially offensive” items displayed openly on a refrigerator in a break room used by some detectives.

“I have serious concerns, not just with the [items] but with a culture that would even permit racially and sexually offensive [items] to be displayed,” Roberts stated in that May 14, 2008 letter.

DA Ferman’s June 30, 2008 letter to Roberts brushed-aside Roberts’ concerns about the racist nature of those items yet it harshly lashed Roberts for removing the racist material from the door of that workspace refrigerator.

Ferman’s letter, seemingly accepting racist antics as acceptable, castigated Roberts proclaiming his “conduct in illegally removing [the items] has the potential to seriously undermine the integrity of the District Attorney’s Office.”

Ferman’s letter ordered Roberts to “immediately return” one of the items that she curiously acknowledged was “owned by a private citizen” but was being “held by” the DA’s Office.

Roberts surrendered that item to Ferman as directed but later received permission from its owner to take possession of it. Ferman’s office refused to release the item to Roberts forcing Judge Restrepo to order that it be surrendered to him to hold it in his office during the legal proceeding.

Coleman feels Judge Restrepo is smacking him down for his criticizing the judge for giving short-shrift to the solid evidence of discrimination against his nephew.

“It’s obvious you don’t have freedom of speech in certain places,” Coleman said during an interview. “I was just looking for fairness.”

Frederick Douglass, the legendary anti-slavery activist, reminded in an 1860 speech addressing suppression of speech that freedom of speech does not exist where force compels people “to suppress their honest opinions.”

Douglass declared, “It is just as criminal to rob a man of his right of speech as it would be to rob him of his money.”