It was just as recently as a year ago that the authorities in politics, business and academe were stating boldly and confidently that the nation’s economy was on the mend, and that there was no chance of a backslide into recession again.

“The good news is that the much-feared double-dip recession is not going to happen,” they said on CNN on Oct. 28, last year. “After completing an exhaustive review of key drivers of the business cycle, ranging from credit to inventories and measures of labor market conditions, we can forecast with confidence that the economy will avoid a double dip.”

“We will not have a double-dip recession at all,” said Warren Buffett, the multi-billionaire investor called, by his fans, the Oracle of Omaha, back on September 13, 2010. “I see business coming back almost across the board,” he told an assembled group of bankers.

And of course, there was Ben Bernanke, the chairman of the Federal Reserve, who actually acts on his presumed wisdom, saying, on June 8, 2010, “”There seems to be a good bit of momentum in consumer spending and investment,” he said at the time. “My best guess is we’ll have a continued recovery [but] it won’t feel terrific.”

Even a Vistage Survey of CEOs, conducted release last Oct. 4, showed the confidence index respondents, all top executives at public companies, saying there was “no evidence” for a double dip back into recession in the nation’s economic future.

So much for expert opinion. 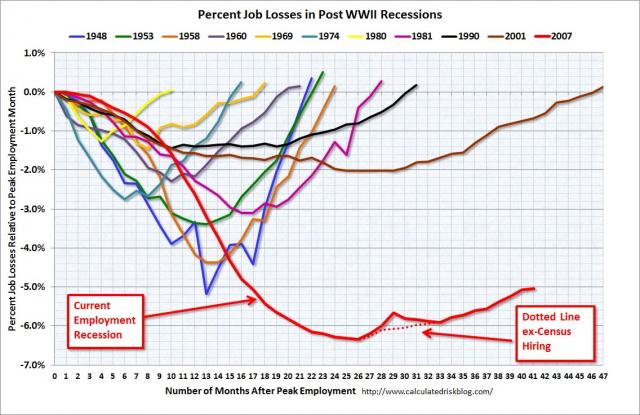 This week we have seen new unemployment claims top 400,000 for the eighth week in a row, as the official unemployment rate (about half the actual rate) rose to 9.1%. The latest figure for job creation, 54,000 for May, is just half of the rate needed to keep up with the growth in the number of working-age Americans. Manufacturing has fallen to where it was in 2009, the respected Case-Shiller Housing Index has declared that the housing price collapse has gone into a second dip, with home prices nationwide now back down to where they were in 1999 and still falling, and consumer confidence, according to the Conference Board, is down to 60.8 (in 1988 it was at 100, and 90 is considered “normal”), a serious slump in a nation where 72 percent of the economy consists normally of consumer spending.

Okay, we’re not in a second round of recession yet, but with economic “growth” slumping into to 1.8 percent for the first quarter of this year, and nothing up ahead to suggest it will get better, there’s every reason to think we could move into negative territory before long.

Also, this stuff about recession is a bit nebulous anyhow. A recession is defined as two back-to-back quarters of negative growth, but when you go from 3% growth — the bare minimum in theory to have jobs being created at a rate sufficient to employ all the new workers entering the job market — to 1% or 2%, it might as well be called a recession. Some companies may still be making profits by operating at a lower than capacity level, but unemployment will be rising, people will be getting poorer, more homes will be going into foreclosure, schools will be laying off teachers, and the general level of misery in the nation will be rising.

Incumbent politicians might try to call that a “recovery,” but that’s really stretching the English language.

So how did all these supposedly smart people get things so wrong?

Any fool ought to see the problem. The Americans who own their own homes have seen what they thought was their major asset shrink in value by at least a third. Don’t even talk about what meager savings they might have had. Back in July 2008, before the markets crashed, Americans had a total indebtedness of $2.5 trillion. The average American was reportedly saving less than $400 per year and had a negative net worth. We were living on credit, not saving. Those who did have some money saved and who had been investing it saw it lose 43% of its value almost overnight.

This is what the too-smart economists, politicians and CEOs simply don’t get. In their world–the one that just looks at P&L statements, shares words of “wisdom” over golf tees, and profits from illegal but routine insider tips on investment opportunities the rest of us don’t learn about–things look pretty good. Companies are profitable, having laid off huge swaths of workers, bashed unions, won pay and benefit “give-backs” from employees and tax breaks from politicians, elected officials have been re-elected, thanks to friendly backing from the corporate media, and plenty of lucre from corporate PACs, and the tax breaks for the rich that were enacted under the prior Bush/Cheney administration have been extended by the Obama administration, so the well-heeled don’t even have to pay much in taxes.

In our world, though, there are higher taxes, higher gas prices, higher food prices, increased bank charges, miniscule interest or no interest at all on any savings, higher tuition and less in financial aid for our kids, no jobs, pay cuts, and if we’re laid off, there’s no more health care.

So where do the happy-talk forecasters of “recovery” get the idea that we ordinary Americans are going to get out there and spend? Where do they get the idea that the great consumer “engine” that powered the economy for the last three or four decades is going to rev up again?

These idiots should go walk around a few shopping malls. What a dismal experience that is!

They should go stand in an unemployment office application line and talk to a few of the newly laid-off. Of better yet, volunteer at a food bank and talk to the people coming in for food assistance (at least that way these parasites would be doing something useful while they did their research).

If they did a little of that real research, they might not be so quick to make jackasses of themselves again, predicting confidently that there’s no double-dip recession in the cards for the US economy.

I’m not holding my breath, but whether they take my advice or not, I’m ready to offer them a challenge: let’s check back this time next year, and see who was right, them or me.