The epic breach of data, including 143 million Americans’ Social Security numbers, at Equifax, a private credit company that answers to nobody and that gathers information about anybody who spends money or borrows it, whether they like it or not, is causing heart palpitations across the nation.

The New York Times reports that Equifax has been deluged with requests to have their credit information “frozen” so it cannot be accessed by anybody, including lenders. But they cannot do it: it turns out that the Equifax online and phonebank system for dealing with such requests have both become “frozen” themselves and are useless. A snarky Times consumer columnist wonders whether this is because of the crush of calls or is because Equifax simply doesn’t want to lose to many credit reports — the basis for its ability to charge lenders for its credit rating services. He has a point.

No surprise that people are desperately trying to shut their credit reports off. People who live on credit and who have little in their bank accounts, are terrified that hackers will now steal their identities, borrow vast sums in their names, or hack into their retirement accounts and pensions and savings accounts and siphon off what’s in them.

But this very fear that wells up in the hearts of the American bourgeoisie is the reason this is all happening.

83 years ago, the Social Security system was established, and everyone who registered received a nine-digit number — the number of an account into which people paid taxes which, over a lifetime of work, were used to calculate a benefit amount to be paid monthly for life from retirement age until you died, providing everyone with a modicum of financial security.

Originally there were laws that made it illegal for anyone to require a person to provide that number, but then, fear led us to start requiring that the once inviolate Social Security Number be used for many purposes. Gradually, imperceptibly first, the number began to be required, first on income tax forms, then on bank accounts and credit card applications, and finally on just about everything. Today, you can’t get a driver’s license without showing a Social Security card. You need to show it to get a car loan or a mortgage. Immigration police can demand one “to prove you are a citizen.” Apartment owners ask for the number when you sign a lease. Hospitals and doctors require it, since unless you never worked, your Medicare number is the same as your Social Security number. 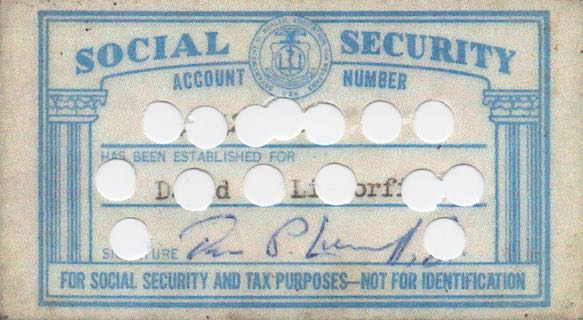 There are so many holes in the security of your Social Security number, the word "security" is really a joke

Many places ask for the “last four numbers” of your card as a kind of ID, but actually the rest of your number is a code that can be reconstructed, given enough information about your background, at least before 2011, when the agency began generating random numbers for new registrants.

And Americans support this intrusion into their privacy. Why? Because we’ve been snookered into fearing terrorists, “illegal” immigrants, fraudsters out to steal our money…you name it. The land of the free is not so free anymore with all this identifying that has to go on. You can’t go anywhere in secret anymore. Try and use cash to rent a car or rent a hotel room. They all want a major credit card, and that, of course, is linked to your Social Security Number (SSN).

And the home of the brave is anything but. We’re afraid of everything: being scammed, being bombed, having our identities stolen, and so we allow this conversion of the Social Security Card and its personalized SSN to become a kind of national identity card — something that for centuries was bitterly opposed by civil libertarians as a fatal step towards state tyranny.

So what can be done, now that this mammoth Equifax breach has occurred?

The answer is obvious. Every American should be reissued a new, randomly generated SSN (which should feature number and letters, upper and lower case).

And Congress should pass a law establishing that these new SSN numbers cannot be required by any company, government officer, or individual. Only the person who owns that number should know it, and release of that number by anyone working at the Social Security Administration should be made a felony.

If the IRS needs a number to identify taxpayers (what, really, is wrong with a name and address?), then it should also issue a randomly generated number to taxpayers, and that number too should be sacrosanct, for use only by the IRS and the individual, not by any private company or lender.

If the government is worried about terrorists using the American banking system, they should require the banks to monitor flows of money. Having banks record social security numbers didn’t prevent HSBC and Citibank from allowing drug cartels to launder hundreds of millions of dollars in drug money through their vaults and computers. The truth is the banks just turned a blind eye to what was a very lucrative banking business.

It’s high time that we Americans re-asserted our right to be left alone by government, and to get it out of our lives. We can start by demanding that Social Security cards at least live up to their name and be “secure.” The porosity of the internet makes it clear that allowing anyone but the Social Security Administration itself to require the use of an SSN means that it, and the account information that goes with it, cannot be secure if any other entity, including government entity, is allowed to require its provision.