But first I want to say something about poetic truth and reality. As I get older I tend to experience the world as increasingly soulful. But I am coming around to believing that that has less to do with my age than with how the world is, day by day, hour by hour, baring more of its soul.

Back in 2016, when brother Dave asked me to write a poem (for Thiscantbehappening .org) about the sparrow showing up at Bernie’s  rally, I replied that I would have a hard time doing that, because it was already a powerfully poetic event. Why mess with it? I have discovered that there is poetry in almost everything that is happening in the world! Sometimes I find that, in writing poetry about this bizarre and mesmerizing world we live in, my job is less to envision anything than to paraphrase reality into metaphor. My gift (and my cross) is that my heart and soul are connected to world events through language. I have written about crisis after crisis, finding that poetry can transform facts into digestible myth without losing sight of the essential story. If journalists cover the “story”, poets treat the mythic elements in the story.

The shift from fact to myth these days is negligible.

As I reflected on the sparrow that showed up on the podium, I realized that it can be taken on two levels. On the macro level, everyone is experiencing the same thing:  what the viral video showed. On the personal level it carries the power of a dream and each person can interpret what the bird signifies for themselves. On the poetic level the possibilities were wide open. As I wrote, I started to address the poem to a fictional person who was there, someone who experienced it directly, but around that dialog with this fictional person I embellished the larger, collective event that gripped everyone’s imagination who saw the video.

As a poet, for my soul’s sake, I had to ask myself, what’s really going on? Indeed, something mythic was playing out. Plus, one would have to be blind not to notice that Bernie revealed a little of his own soul in the way he responded to the bird’s appearance, or shall we say, its endorsement? And, hey!, isn’t it about time a candidate with soul stepped forward? If Bernie is good enough for a sparrow he’s good enough for me. 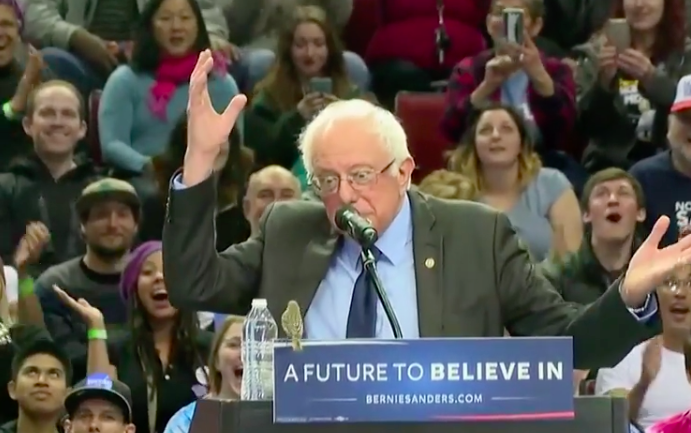 One day, in the asylum

We were having a bad day in the asylum,
A bad 8 years, a bad sixteen years,
Oh, heck, a bad era,
Well, let’s face it, a bad history.
But we had a good leader for a change,
A guy from Vermont
With wild white hair,
An honest man
Who most people liked and trusted
Who openly talked about revolution.

We were all hurting,
Waiting for a sign.
Time was rushing by.
Days, weeks, months.
We were all serving life-sentences
Without parole,
That is, living in America.
Me in Vermont, you in Pennsylvania,
My good friend Tim in California. . .
And the feeling was ominous and ubiquitous.

Like a Stephen King novel.
There were distant mountains
Crumbling silently,
Occasionally a forest would fall down.
Bees were going extinct.
Japanese children were eating Minke whales in school.
The government was busily making tiny atom bombs.
But who knew what was real anyway?
Some of us had turned to prayer

And were insisting that it was time
To ask the stars
To come closer
And tell us what they saw.
We were tired of trying to run the world
From the insane asylum,
So very, very tired.
(Asylum? Some called it a prison,
Some a way of life.
Some called it home.)

What would happen next?
We kept hoping,
Looking up from our iPhones,
Staring at the sky with medicated eyes.
And then?
It was just another Friday
Like any other day,
Heading in to another presidential election cycle,
In the asylum.
It happened at a Bernie rally in Portland.

A sparrow flew in,
Hopped onto the podium.
(But it wasn’t just another day!, you say:
The Washington Monument had lost its erection
And the Capital Building was deflating
And the reflecting pool was reflecting a void.
But that’s exactly what I mean, another day.
But even before the sparrow appeared, you say,
Everyone at the rally was unaccountably happy.
That’s because they were from Portland, I say.

Well, that brave little bird,
Bobbed right over the wall.
Just to look in on our trouble.
And everything stopped.
It is the dove of peace
Our leader announced.
It wore a little crown of thorns
Some say.
And some say it tweeted,
Right into the microphone.

Some say it shouted loud enough
To wake the dead!
MAKE YOUR MOVE, it said,
THIS IS YOUR DAY!
Some say it dropped a seed
Right into Bernie’s palm.
And some say it simply shed a sparrow tear,
And flew away.
I don’t know; I wasn’t there.
But I’m going to trust my intuition here

Because things like this don’t ever happen
Just as people say.
And, actually, as a rule, you might even say
That things like this never happen,
At least not in the asylum.
Oh, and some say nature
Endorsed our revolution on that day.
I don’t know, I wasn’t there.
But you were, yeah, you were there.