Hampton — Recently, while selecting the appropriate worn and muddy clothes for yard work, I chose a mostly-broken belt that a sensible person would have tossed long ago. To me, however, there was still a shred of usefulness in it so I kept it to occupy the lowest rung of my very short wardrobe ladder. The belt had problems; the holes for the various sizes became seriously enlarged after the first few uses making it barely functional and quite unattractive. As I cinched it, I felt something give, only to discover that one of the two screws that held the buckle to the belt tore through the cheap belt material rendering it now, even to me, totally useless. As I grumbled and inspected the problem, I noticed the brand name proudly displayed on the buckle: Donald J. Trump. 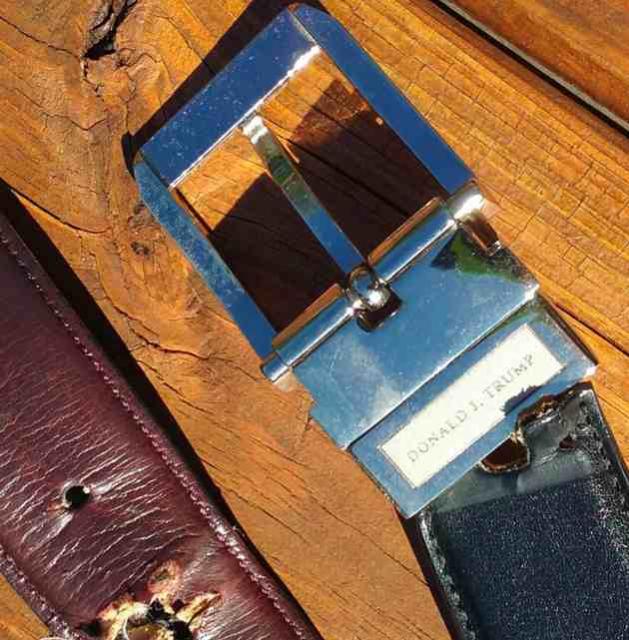 A few thoughts about this belt came to mind. I remembered buying it a few years ago and thinking it was a handsome leather belt for $10—seemingly a good deal. It held up well for about a week and then the holes became shredded and enlarged. My inspection revealed that it was “bonded leather”, whatever that means. “Believe me folks, it’s not just leather, it’s bonded leather.” My assumptions about bonded leather being a certified higher quality of leather proved false as I could now plainly see it was merely two super-thin leather layers wrapping some cheap fabric filling. This was a product in a race with itself to see which part would fail first as it contained no quality materials.

I own other belts that I have worn for over 20 years. In a sense, belts are the definition of an over-engineered product. A strap of leather (or canvas or hemp) and a metal buckle should never wear out in doing the not overly taxing job of holding up one’s pants. Trump’s team worked very hard to figure out how to under-engineer this product—using cheap materials which would soon break down. The concept of this belt actually working and lasting must have been a very low priority. Attaching his name on this shoddy merchandise, produced in China, apparently doesn’t bother him.

I wondered about confronting Mr. Trump with my concerns and imagined his “customer service” skills. First, he would blame and then insult me for putting on weight over the past few years. He might even insult me with a short person joke or two just for good measure despite being totally unrelated to the belt problem. Then I would be berated for being so stupid as to buy a product with his name on it and expecting any type of quality or satisfaction (I do deserve that one). The whole experience would be a “gotcha” moment, where like other hucksters, once the money changes hands, you are stuck with the product, like it or not. Those of us with marketplace expectations of fair play, quality merchandise and honest representation of the product are easy pickings for con artists like him.

My crappy Trump belt is a cheap lesson to learn as long as it helps prevent a far more costly lesson this November. Don’t be caught with your pants down. Caveat emptor–buyer beware!

ED ADELMAN is a semi-retired special education schoolteacher in Connecticut and contributed this article to ThisCantBeHappening! Ed can be reached at eadelman1@charter.net>/a>