While I periodically have written commentaries dissecting and pillorying news articles in the New York Times to expose their bias, hypocrisy half-truths and lies, I generally ignore their editorials since these are overtly opinions of the management, and one expects them to display the elitist and neo-liberal perspective of the paper’s publisher and senior editors.

That said, the August 17 editorial about Wikileaks founder Julian Assange, who has spent four harrowing years trapped in the apartment-sized Ecuadoran embassy thanks to a trumped-up and thoroughly discredited political rape “investigation” by a politically driven Swedish prosecutor and a complicit right-wing British government, moves far beyond even the routine rampant bias and distortion of a Times editorial into misrepresentation and character assassination. As such it cries out for criticism.

Headlined “A Break in the Assange Saga,” the editorial starts off with the flat-out lie that “Ecuador and Sweden finally agreed last week that Swedish prosecutors could question Julian Assange at the Ecuadorean Embassy in London where he has been holed up since 2012.”

The casual reader fed only corporate media stories about this case might logically assume from that lead that such an interview has been held up by a disagreement of some kind between Ecuador and Sweden. In fact, Ecuador and Assange and his attorneys have stated their willingness to allow Swedish prosecutors to come to London and interview Assange in the safety of their embassy for several years now. The prosecutor in Sweden, Marianne Nye, who has been pursuing Assange all that time like Ahab after his whale, has not only never taken up that offer, but by her refusal to go to London in all this time, demanding instead Assange’s enforced presence in Stockholm, has allowed any possible rape charges, if any were even appropriate, to pass the statute of limitations. The paper doesn’t mention this. Nor does the editorial mention that the Office of the United Nations High Commissioner for Human Rights Working Group on Arbitrary Detention last February found that Assange is effectively being held in arbitrary detention by the UK and Swedish governments, and called for his release, and for the lifting of British government threats to arrest him and extradite him if he leaves the safety of the embassy. 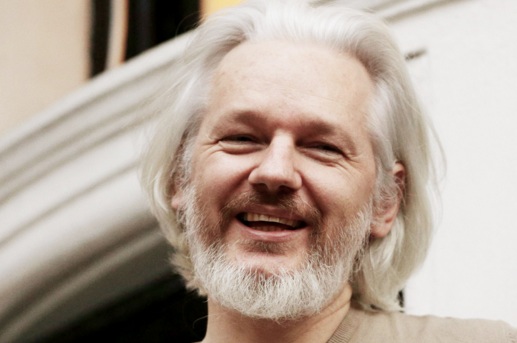 The paper fails to mention the important point that there are no rape charges pending against Assange, and never were. Swedish prosecutor Nye, at one point, was trying to build a case that Assange committed a rape in 2010 by proceeding to have sex with a woman (she had invited him to stay in her house for the night and to sleep with her), after his condom had allegedly broken during consensual intercourse — a circumstance that in most countries would not qualify for a rape charge. (The woman by her own account later went out to buy breakfast for Assange, and subsequently tweeted boasts about having bedded him, but later took those down.) A second woman, who also had consensual sex with Assange the same week has said her complaint was only made in order to make Assange take an AIDS test, which he subsequently did, and she subsequently dropped her complaint. Although no formal legal charge of rape was ever filed against Assange, Sweden succeeded years ago in getting an overly enthusiastic Interpol to issue an unusual “red alert” warrant for him, which led to his arrest in Britain and to his seeking asylum in the Ecuadoran embassy. None of this important history got mentioned in the Times editorial.

The Times claims Assange’s real reason for not wanting to go to Sweden to undergo questioning is that he “presumed: that extradition there would also lead to his extradition from Sweden to the United States to face charges over the Chelsea Manning leaks” about US war crimes in Iraq.

This sentence leaves the same casual reader to assume that Assange is just being paranoid. Unmentioned is the fact that throughout Assange’s whole ordeal, the US Justice Department has possessed a sealed and active indictment charging Assange with espionage — a charge which, if ever brought to trial, could result in his being sentenced to life in prison in some US maximum-security hellhole, or worse. That is not paranoia. It is what the US does to perceived enemies of the state, who are generally prevented by the courts from offering genuine defenses, such as a First Amendment argument in Assange’s case. Also unmentioned is the fact that Sweden has never promised not to make such an extradition to the US after questioning him.

The Times, which enthusiastically published articles based upon many of the very leaks that Assange brought to light via Wikileaks, including Pvt. Manning’s devastating in-flight video of a US attack helicopter slaughtering innocents in Baghdad (as the pilot and gunner laugh), cites others who have “accused” Assange, “even those who have hailed his exposes of government secrets,” of being “reckless with personal information,” and of “using leaks to settle scores.” As an example of “those” people, the editorial cites film director Alex Gibney, who authored a Times Op-Ed piece. It doesn’t note that Gibney’s claim to fame was producing a documentary film on Wikileaks that was little more than a fact-challenged hit piece on Assange.

As evidence of Assange’s alleged lack of principles, the Times cites Wikileaks’ release of recently hacked Democratic National Committee emails disclosing the DNC’s efforts to throw the party’s nomination to Hillary Clinton, and to undermine and destroy the campaign of her rival, Bernie Sanders. The release, the Times writes archly, came “days after Mr. Assange’s denunciation of Hillary Clinton and just before she was officially named the Democratic presidential nominee.”

Now hold on there. The Times during the course of this primary season, repeatedly used its supposedly unbiased news pages to ignore, ridicule and redbait Sanders, while repeatedly declaring Clinton the likely nomination winner, even as she lost primary after primary. It joined in a corporate media stampede to declare the race over before the June 7 primary in which California and six other jurisdictions had yet to vote in primaries that could have still handed the victory to Sanders. Meanwhile, the Times is known to have held stories from publication in the past that could have been devastating to President George W. Bush back in his 2004 race against John Kerry. These concerned evidence of a hitherto unknown massive warrantless spying campaign on American citizens by the National Security Agency, and even a fully written and edited report that Bush had likely cheated in his three debates with Kerry. Both were held until after Bush was re-elected, and the latter article was never published by the Times.

Is that what the Times was suggesting a “principled” Assange should have done with information he had in his possession exposing a corrupted DNC working for Clinton? Withhold it from publication?

The real issue here is not Assange’s principles, which have always been about giving Americans and the rest of the peoples of the world access to secret information that is being improperly hidden from them by people in power, but is rather the lack of principles at the New York Times, which seems long ago to have forgotten that the role of the so-called Fourth Estate is supposed to be openness, and, as Joseph Pulitzer put it, “to afflict the comfortable and comfort the afflicted.”

Instead, the Times, with its sycophantic news pieces blaming Russia, on the basis no evidence, of being behind the DNC hack, and of being an aggressive threat to the sovereignty of eastern European nations, with its gentle reporting on Clinton, which glides over the epic corruption at her and husband Bill’s Clinton Foundation, and with its one-sided coverage of the Israeli occupation of Palestinian territories on the West Bank and the decades-long Israeli siege of Gaza, is little more than a propaganda organ of Washington.

It is symptomatic of this propaganda role that the Times sees nothing wrong with the Justice Department’s finding no cause to prosecute Hillary Clinton for her willful violation of the Freedom of Information Act and of State Department regulations in handling all her communications as Secretary of State on a private server in her own home, and sees nothing wrong in Attorney General Loretta Lynch rejecting an FBI request to investigate corruption at the Clinton Foundation, but at the same time, finds it perfectly acceptable for that same Justice Department to have a four-year active secret espionage indictment sitting ready on the shelf to file against journalist Assange, should prosecutors manage to get their hands on him.

Maybe that’s because the Times is unhappy that Assange and Wikileaks have been doing what the Times is so clearly unwilling to do: aggressively pursue real journalism that matters.