It is amazing to watch politicians trying to weasel their way around their promises. President Obama is providing us with a good illustration of the art.

During the latest presidential campaign and in the final televised debates, both Obama and Vice President Joe Biden were unequivocal in asserting that the US would be leaving Afghanistan and ending the war in that country at the end of 2014–a goal most Americans profoundly want. Biden, in a heated debate with his Republican opponent Paul Ryan, said the US would “absolutely” be “out” of Afghanistan at the end of 2014. Obama, a week later, said, “By 2014, this process of transition will be complete and the Afghan people will be responsible for their own security.”

I’m reminded of President Clinton, a lawyer who, when pressed under oath by a special prosecutor hounding him over the details of whether he had had sex with a young White House intern, said that the answer hinged on “what the meaning of the word ‘is’ is.”

This past weekend, it was reported that Obama and the generals at the Pentagon are planning on keeping at least 10,000 US troops stationed in Afghanistan indefinitely after that 2014 deadline for ending the war and withdrawing from that war-torn land.

Just to make it clear what we’re talking about here, 10,000 troops would represent an army half the size of the entire military of either the Netherlands or Denmark, two countries which currently have troops assigned to the NATO forces posted in Afghanistan as allies in the 12-year-long US war there. 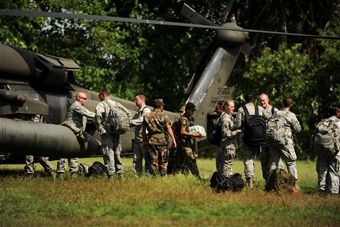 The notion that these 10,000 post-2014 soldiers would just be “training” the Afghan military is simply absurd. Parris Island, the famed boot camp in South Carolina for the US Marine Corps, which boasts what probably is the toughest training program of any of the branches of the US military, churns out 17,000 new Marines a year with a training unit of 600 uniformed personnel. That’s one trainer per 170 recruits. At that rate, the 10,000 US “trainers” in Afghanistan could be putting 1.7 million new recruits for the Afghan army through their paces each year! Even allowing for the typical top-heaviness of the US military, if only a third of those 10,000 “trainers” were actually drill sergeants and their staff, we’re talking about a training force capable of producing over 500,000 new Afghan soldiers per year! But Afghanistan’s army today, which the US claims is already largely trained and ready to protect the country, has only a total of some 200,000 active duty soldiers altogether.

How many more soldiers does the 200,000-man Afghan Army need trained anyhow?

So let’s get serious here. These 10,000 soldiers that Obama and the Pentagon are talking about stationing in Afghanistan after the war is “ended” in December 2012 are not really going to be trainers.

Besides, how do you “end” a war by simply having one side say it’s over, unless you actually do stop fighting and walk away? Certainly the invading side in a foreign war can call that war quits, but if the other side doesn’t, and the invader stays on the battlefield — which in Afghanistan is the whole county — you haven’t ended it at all. The other side will continue to hit you until you’re gone.

In other words, clearly that force of 10,000 US troops, whatever they are called officially, if they really were supposed to be just “trainers,” would inevitably actually be in a state of war, because there is no way that the Taliban in Afghanistan will quietly allow them to be there training an army to fight them, without taking the battle to the “trainers.” And the truth is they will have been sent over there not to train but to fight.

So how then, can Obama, Biden and the generals be promising that the war will be ended in 2014?

The answer is that they are not calling what will be happening after 2014 a “war.” They will be changing the definition of the word “war.”

It is totally predictable that the unfortunate soldiers who are ordered over as part of that 10,000-member force of “trainers” after 2014 will be subjected to attacks by Taliban fighters, by suicide bombers, and by IED mines. Their bases will be hit by mortars and rockets. When they travel, their vehicles will be the targets of RPGs. They will also be subject to attack by members of the Afghan military whom they are ostensibly training, since the Taliban have already learned that infiltration of the country’s army is a great way to get close to the American forces, the better to hit them when their guard is down or their backs are turned.

Inevitably, the US forces will be forced to fight back, and to take the offensive too. In fact, their very presense there constitutes a strategy of offense. There will certainly continue to be US airstrikes, and we can be sure that armed attack drones will be widely employed also, guaranteeing the creation of plenty of new enemy forces sworn to punish and drive out the US.

None of this will, of course, be described as “war” by the US, or by the compliant corporate media in America.

There is a model for this kind of thing. America has been fighting a war in Colombia for decades against the FARC, marxist rebels operating in the jungles of that country at the northern end of South America. Only this has never been described as a war in the US media or in reports from the Pentagon. The soldiers sent down there, we are informed, are just “training” and “advising” the Colombian military, which we are told is fighting against “drug lords.”

The same was true for years in El Salvador, a little country in Central America that endured a decade-long revolution and civil war, in which the US was backing a vicious oligarchy and financing, arming and directing a brutal military that regularly sent death squads out into the slums and the countryside to murder those who supported the rebels. American forces there were always described as “trainers” or “advisors,” though their roles were far more active, and bloody, than that, as was occasionally exposed when they’d get caught in rebel ambushes (as happened to the 12 Green Berets staying at a hotel that rebels temporarily captured during an offensive in the country’s capital).

Putting military forces in a country and calling them advisors or trainers is an old propaganda stand-by for the US. The only thing that sets this latest fraud apart from earlier imperial interventions by US military forces this time is the numbers involved. Even that legendary obfuscator Bill Clinton would have a hard time making anyone believe that a force of 10,000 heavily armed US troops are just “trainers.” (By the way, the last time the US had 10,000 “trainers” and “advisors” in another country that was a war zone was 1962. The country was Vietnam, and the advisors were actively fighting what later became a war involving as many as 500,000 US troops.)