A few hours before the Democrat Party made history on July 26, 2016 with the nomination of the first female to head a major party presidential ticket in America, Ray Lewis stood across from Philadelphia’s City Hall holding a sign that contradicted the position of his previous profession: policeman.

Standing about four miles from the meeting site of the Democratic National Convention (DNC), Lewis, a retired Philadelphia Police Department captain, held a sign demanding the legalization of marijuana.

Support for reform of laws criminalizing marijuana is included in the DNC’s Platform. But the legalization advocated by Lewis and millions across America is not a position held by Hillary Clinton, the Democratic Party’s official candidate for the 2016 presidential election. Clinton’s vice-presidential pick, Virginia U.S. Senator Tim Kaine also opposes legalization.

Former law enforcer Ray Lewis quickly cited his past experiences as a policeman when asked why he endorses the legalization of the long outlawed marijuana. 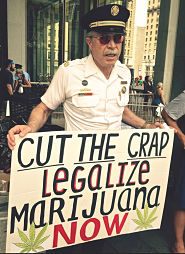 “As an ex-cop, without a doubt, I know [marijuana] should be legal. It is a disgrace that we arrest and incarcerate for something that is less dangerous than alcohol and tobacco, two substances that are legal,” Lewis said.

“White America needs to know that marijuana is not the problem. The problem is the prohibition of marijuana,” Lewis said before his presentation at a pro-pot/anti-Drug War rally across from Philadelphia’s City Hall where many in attendance openly consumed the illegal substance.

“The trillions of dollars spent on marijuana enforcement over the years could have been spent to change conditions like poverty and poor education in our schools,” Lewis noted.

The legal and social status of marijuana is the subject of intense debate and reexamination in America. Public opinion polls in recent years register a majority of Americans supporting legalization including increasing numbers of conservative Republicans.

Philadelphia is the largest city in America to decriminalize possession of small amounts of marijuana, treating possession with a traffic ticket like citation instead of the former practice of expensive custodial arrests and court adjudications.

Prejudicial policing that targeted African-Americans triggered approval of decriminalization in Philadelphia in 2014.

Yet, despite Philadelphia’s decriminalization blacks remain the predominant persons arrested for marijuana violations in the city. In 2015 black adults comprised 82 percent of all marijuana enforcement arrests while black teens totaled 74% of juvenile arrests according to an analysis of law enforcement statistics conducted by Chris Goldstein, author of the Philly 420 Blog. Philly.com, the web portal of the company that owns the city two largest daily newspapers, publishes the 420 Blog.

The DNC Platform contains criticism of the prejudice in pot law enforcement. According to that document, current pot prohibition laws “have had an unacceptable disparate impact with arrest rates for marijuana possession among African Americans far outstripping arrest rates among whites, despite similar usage rates.”

Democratic Party presidential candidate Hillary Clinton and her VP pick Kaine support allowing individual states to decide on the legal status of marijuana. That posture however is problematic due to federal law barring medical and legal marijuana. Federal prohibition, for example, prevents marijuana businesses in states where marijuana sales/use are legal from using banking and other financial services.

Hillary Clinton wants “more study” on marijuana. This stance of the former U.S. Senator from New York State ignores the fact that one of America’s earliest and most comprehensive studies on marijuana’s medical and sociological impacts occurred in New York City.

Months after the federal government barred legal use of marijuana in 1937 the then mayor of New York City, Fiorello LaGuardia, initiated a thorough study on the substance. LaGuardia sought the study in part because the federal officials pushing pot prohibition claimed New York City contained America’s worse pot problems.

That study, released in 1944, disproved many of the claims still embraced as explanations for marijuana’s continued prohibition. Conclusions of the LaGuardia study included: smoking pot does not led to addiction of that substance or addiction to heroin and cocaine; use of marijuana is not “the determining factor” in the commission of major crime and use of marijuana does not cause juvenile delinquency.

Mayor LaGuardia, in the Foreword to that 1944 report stated, “I am glad that the sociological, psychological, and medical ills commonly attributed to marihuana have been fond to be exaggerated insofar as the City of New York is concerned.”

Ed Forchion, better known as NJ Weedman, who is one of America’s foremost African-American anti-pot-prohibition activists, also spoke at the Philadelphia rally where Ray Lewis spoke. 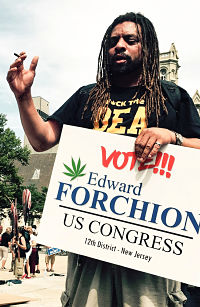 “Cannabis has been around for thousands of years and it’s never hurt anyone,” Forchion said.

U.S. President Barack Obama has acknowledged his past use of marijuana.

Obama’s immediate predecessor, George W. Bush, neither confirmed nor denied his use of marijuana that was widely reported by his college friends. Bush’s predecessor, William Clinton, acknowledged his marijuana use. But Clinton qualified his use with the improbable contention that he smoked but did not actually inhale the pot he smoked.

Those three presidents deflate a major defense for continued criminalization of marijuana: that the substance inhibits intellectual development. Each of those presidents graduated from Ivy League universities with Clinton and Obama earning law degrees from Ivy League schools.