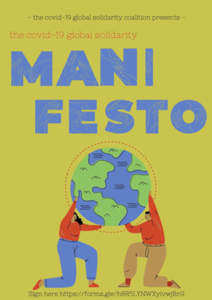 Conference participants enthusiastically expressed agreement with the manifesto, signed by ca. 3000 people. They shared ideas for growth, connecting with other groups, and how to implement major points. There were many comments in both conferences regarding moral rights and duties, the need for a moral imperative; ending wars; finding ways for those without voices to be heard; the need to protect animals and mother earth.

The manifesto recognizes all our fundamental needs for survival, and providing opportunities to realize a fulfilling life for self and in commonwealth.

These sentences express its essence: “We demand an immediate global ceasefire in all conflicts and an end to the disease of war. We demand that every nation move at least half its military spending to provide health care, housing, childcare, nutrition, education, Internet access, and other social needs so we can truly protect people’s physical, psychological, and economic security. [This includes] the closure of foreign military bases, the cessation of military exercises, the abolition of nuclear weapons…and an immediate lifting of all sanctions targeting entire nations, which are impoverishing vulnerable populations and killing people by blocking access to medicines and medical supplies.

“We demand that unsustainable capitalist economies, based on the fantasy of endless growth, be replaced with cooperatively based economies of care, where human life, biodiversity, and our natural resources are conserved and a universal basic income is guaranteed so that governments can work together to combat the existential threat of climate change.”

Who/What is the Coalition

When the pandemic set us all physically apart, a group of people from several countries gathered in online meetings to create connections and to overcome feelings of isolation and individual helplessness. First, a handful and then half a hundred activists, scholars, artists, writers, workers and students from 19 countries met to share experiences and ideas, to plan and build community. They formed the COVID-19 Global Solidarity Coalition.

“We are a multi-national group of individuals of diverse backgrounds with no collective affiliation to any political party. Our sense of humanity helps us defy perceivable barriers across nationality, color, gender, age, language, geographical location, and histories of activism,” they wrote.

“We share a commitment to envision and create a world of social and economic equality, peace, and environmental sustainability—together, and through both small everyday acts and large structural changes. Our manifesto articulates our holistic vision of genuine co-operation across nations towards building a safe global community of thriving human beings. It is the first step of long-term commitments to hope, empowerment, and action. We invite all who are similarly minded to join us in pursuing and expanding our vision.”

During the launching conferences, people made these observations:

Confront essential problems as a human species; attack the causes of the inequalities, pollution, poverty and curable sicknesses. Our main objectives are to provide health and safety for all, universal equality and peace.

How to reach out to people everywhere, such as people from Russia, China, Venezuela, Iran, Cuba—countries that the United States seeks to dominate through war and “regime changes”?

How to make the manifesto a reality?

In the US, several groups are forming to find answers to inequities, making manifestos, and conducting actions, including periodic strikes. Workers’ strikes have started a new awareness of what it means to be connected as workers, a reawakening of the working class. Some gains are already happening. (See: https://popularresistance.org/generalstrike2020-how-to-participate/ )

Popular Resistance founders suggested that we prioritize building a movement of movements, something like a civil equivalent to the Non-Aligned Movement of governments. They suggested that the coalition could support Iran and Venezuela, which the US has targeted for starvation through tough sanctions, the confiscation of their funds and assets in the US, UK and other European nations, forcibly denying them the right to sell their own resources, namely oil.

Other suggestions included: support for Wikileaks and its incarcerated founder Julian Assange; merging actions against wars and pollution of the planet; placing true democracy on the agenda, empowering citizenry, shifting from political and economic elites to grassroots networks.

One participant stated: “War, poverty, domination, exploitation, and other problems so brilliantly identified in the manifesto are all necessary products of capitalism, the concentration of ownership of the entire world in a few hands. The antidote to capitalism, in my opinion, is democracy. Bottom-up organization and institutions that focus on the public interest, on the equal distribution and stewardship of the world, restoration of the commons.”

Activists in Italy, a couple of whom are members of the coalition, are resisting the government’s military bases in foreign countries. Italy has seven military bases, including in Afghanistan and Libya where it participated in invasions of those countries.

The initiator of the coalition, anthropology Professor David Vine of American University, wrote a book about the US’s militarization of the world, Base Nation.

Most foreign affairs writers place the number of US foreign bases at 800 in 130 countries. The US has troops warring in 76 countries, 39% of the world.

Brown University studies of the human and financial costs of US wars just since 9/11 documented direct war deaths at 801,000, half of those civilians, and 21 million war refugees. The financial price of these wars to taxpayers is $6.4 trillion.

Other researchers place the number of Iraqis killed since the US and “coalition of the willing” invasion, in 2003, at 2.4 million.

The only time in history that an accounting of Pentagon funds was undertaken, 1,200 independent auditors could not find how $2.7 trillion was spent.  Auditors and Pentagon spokespersons agreed that the audit had failed and was impossible to complete. See Dave Lindorff’s article.

By contrast to the US, Russia has 16 military bases in ten countries, most in former Soviet republics. China has only one military base beyond its borders. It is a “logistic support” facility in the small African country of  Djibouti, where the US, France and Japan also have military bases. China is there to protect its merchant ships from pirates.

In the near future, the coalition will discuss how to implement the manifesto, how to create actions and interconnect with other groups.

Organizational Signatories to the Manifesto

RON RIDENOUR is a US expatriate journalist and anti-war activist living in Denmark. His books, “The Russian Peace Threat: Pentagon on Alert” and ‘Winding Brook Stories’ are available at Amazon and Lulu.  His other work can be found at ronridenour.com;   ronrorama@gmail.com