The rot at the core of US international affairs, domestic politics and the corporate media is evident in the American approach to the Ukraine crisis.

Just look at the freak-out from all quarters as the people of the eastern part of that country conduct, under conditions of attack and violence fomented by military units sent in by the Kiev putsch government, a peaceful plebiscite asking people to give their view as to whether they want some kind of sovereignty separating them from western Ukraine.

The official US State Department position on the balloting in Dohansk and Luhansk is that this voting effort was “illegal” and “an attempt to create further division and disorder.”

“The United States will not recognize the results of these illegal referenda,” said State Department spokesperson Jen Psaki.

The White House called the voting “illegitimate” and “illegal.”

The US has not once called the violent coup that overthrew Ukraine’s elected government illegitimate or illegal.

Indeed any violence during the voting, which appeared to actually be celebratory, came from Ukrainian troops. Even the Associated Press, which has largely been parroting the US line on separatists in eastern Ukraine, wrote:

“Although the voting in the Donetsk and Luhansk regions appeared mostly peaceful, armed men identified as members of the Ukrainian national guard opened fire on a crowd outside a town hall in Krasnoarmeisk, and an official with the region’s insurgents said people were killed. It was not clear how many.” (Actually the reporter on this story wrote that he saw the shooting, and witnessed two dead bodies as a result, so AP didn’t have to weaken the story’s authority by attributing it to “officials with the region’s insurgents+ — the latter an odd term to give to armed people working, clearly has the support of the communities, to defend them from attack by armed, uniformed thugs sent in from the Kiev regime to disrupt and kill people.)

The US corporate media have largely toed the official line, referring to the separatists in eastern Ukraine as violent when they have been in reality surprisingly restrained in the face of overt violence by military forces dispatched by Kiev. And they never mention the balloting in the east without also mentioning that the US believes that Russia is behind that effort, though in fact Russia’s leader, Vladimir Putin actually angered and annoyed separatists by calling on them — unsuccessfully — to delay their voting plan. (Even that arch cold-warrior and war criminal Henry Kissinger has told CNN that it “makes no sense” to claim Putin is behind the unrest and the separatist movement in western Ukraine.)

But let’s analyze that position calling the voting “illegal.” 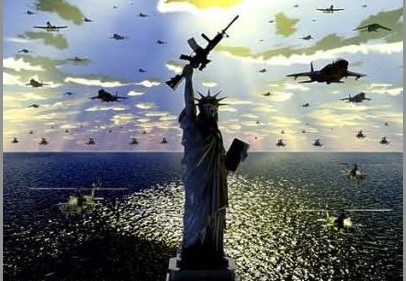 How is a plebiscite ever illegal?

In Texas, politicians periodically call for secession from the US. Within days of President Obama’s election as president, several states, including Texas, saw petitions filed in Washington calling for secession. In 2012, there was a petition filed on the White House Website with over 119,000 signatures calling for Texas secession, according to a report on ABC news. No FBI agents or federal troops were dispatched to arrest the perps.

In fact, if I were to launch a petition drive to get a secession question on my town’s ballot, and it were placed there by the town government, it would not be illegal for the people of Upper Dublin to cast votes saying whether or not they wanted the town to secede from the union.

The same is true for a state like Texas, California, or New York City or New Hampshire — all places where there has been talk of secession at one time or another.

Of course, if a state actually tried to secede, like Scotland is now attempting to do from the United Kingdom, or like the province of Catalonia is attempting to do in Spain, it’s likely that the US would block the move, either with federal troops or, more likely, by economic threats–for example warning that secession would mean an end to transfer payments like welfare, Medicare, Social Security, education funding, etc., plus the assumption by the seceding jurisdiction of its share of the accumulated federal debt.

But it wouldn’t be “illegal” to vote on the idea.

Actually the idea of splitting up nations where there are geographically separated ethnicities that have been thrown together through geopolitics has a long history–some good, some bad. We have the division of India and Pakistan as the British abandoned colonial control of South Asia, we have the division of Czechoslovakia into two separate countries — the Czech Republic and Slovakia — and of course the fragmentation of Yugoslavia into a number of republics — Croatia, Bosnia and Herzegovina, Serbia, Kosovo, Slovenia, Macedonia and Montenegro. And in Africa we have Sudan and Ethiopia and the breakaway province of Eritrea. We also, as I have mentioned, have votes scheduled for the possible independence of Scotland and Catalonia, we have the perennial campaign in Quebec to gain sever itself from English-speaking Canada, and even in the core of Western Europe, there is a strong campaign in Belgium to split into two nations, one Flemish-speaking and one French-speaking.

Clearly, it has proven to be much better when such divisions were accomplished by the ballot, as in Czechoslovakia, and as is being attempted in Scotland, Catalonia, Belgium and Quebec, rather than by force, as in India, Yugoslavia, Ethiopia or Sudan.

Judging by the historical record, the US appears to have generally favored the violent approach to separations, though–whether it has been promoting them or trying to prevent them. It is the US, after all, that imposed the post-war division of Korea into two parts that has left a legacy of over nine million dead. It is the US that also forced the post colonial division of Vietnam into two halves, and then fought a bloody war for a decade to try and keep it divided, killing over three million people in the process. The US also provided diplomatic support and over 90% of the arms that Indonesia used in brutally suppressing the independence movement in East Timor, a former Portuguese colony where a UN-sponsored plebiscite showed overwhelming support for independence from Indonesia.

Who, we should be asking ourselves and our violence-obsessed leaders in Washington, not to mention the craven editors and publishers of our leading “news” organizations, is the US to call sovereignty ballots by anyone “illegal” or “divisive”? (Who, for that matter, is the US to criticize Russia for “meddling” or creating “divisions” in Ukraine, when the US spent over $5 billion by its own admission meddiling and sowing such divisions, and ultimately supporting a coup that ousted the country’s elected goverment, turning it over to fascists dedicated to “killing Russians, Poles and Jews.”)

In a world riven by ethnic and racial strife, it would appear that letting people use the ballot to decide whether they should try and get along with their neighbors inside some often arbitrary polyglot national boundary, or as two separate nation states, is a much better approach than having them fight it out to the bitter end, usually with larger states like Russia and the US and China, all with their own selfish geopolitical and commercial interests, vying from the outside and sometimes with their own troops to influence the internal outcome of such struggles.

Voting can never be “illegal.” It is, simply put, the best way for people to express their opinions. As for being “divisive,” there’s no way that voting can be as divisive as sending in tanks, planes and drones to kill people whose opinions one particularly leader or political group doesn’t like.