The piercing, bone-deep pain for a parent from having their child forcefully snatched away by authorities is a hurt Debbie Sims Africa knows in horrific ways.

The immense suffering some immigrant parents currently experience — triggered by the child-snatching/ family separation anti-immigration policies pursued by the Trump Administration on America’s southern border – is something that impacts Africa very personally.

On August 8, 1978 authorities in Philadelphia, literally snatched Africa’s two-year-old daughter from her arms.

A few weeks later when Africa gave birth to her son, Philadelphia authorities snatched him away also.

For more than 39-years Africa could not do what she wanted to do all her life: be a lovingly embracing, nurturing and protective mother.

Those 39-plus years Africa lived with that agony of unfulfilled motherhood are more than 467-months: more than 14,200-days, more than 341,640-minutes and more than 20.5-milion seconds.

On August 8, 1978 Philadelphia police arrested Africa following a shootout between police and members of the radical MOVE organization where a policeman was killed. Africa is a member of MOVE – in fact, a niece of MOVE founder John Africa. (All MOVE members utilize Africa as their last name.)

Africa and eight other MOVE members (five men and three women) were convicted for that Philadelphia policeman’s death and sentenced to identical prison terms of 30-100-years.

Recently Debbie Africa, now 62-years-old, won parole release from a Pennsylvania prison – the first MOVE member convicted for that 1978 shootout to leave prison…alive. (Two of the MOVE 9 died in prison.)

Africa, during a press conference following her release, said seeing the cruel separations on the southern border “brought back emotions” for her.

“When I saw that immigration separation on TV, I had a familiar feeling,” Africa said, sitting beside her son Michael ‘Mike’ Africa Jr. during that press conference. “It is totally wrong what Trump is doing. The child did nothing wrong regardless of the parent. It pulls at the heart strings.”

The emotions Africa felt watching Trump’s immigration enforcement practices palled in comparison to the emotions she felt arising from the reality that she had to leave her MOVE colleagues in prison, including the two surviving MOVE women who shared a prison cell with her.

“I was happy to go home but hurt that they are still in prison,” Debbie Africa said, describing how her MOVE member cellmates, Janine and Janet, helped her pack to leave prison. One of the still imprisoned MOVE 9 men is Debbie’s husband, Michael.

Debbie Africa said she did maintain contact with her daughter and son (who was born in a prison cell) throughout her 39-plus-year imprisonment. Yet, she noted that sharing a few hours with her children in a prison visiting room is not the same as full-time, real-time mothering.

Debbie’s son Mike said life was “hard” for him growing up without his mother and father, not having their “guidance” at times when he needed it. Mike said that when he went to wake up his mother the morning after her release from prison he saw her feet for the first time in his life.

“Things people take for granted like just talking to your parents — I never had,” Michael said. “Fortunately I had the support of my parent’s family, other MOVE members and MOVE supporters. It helped a lot. 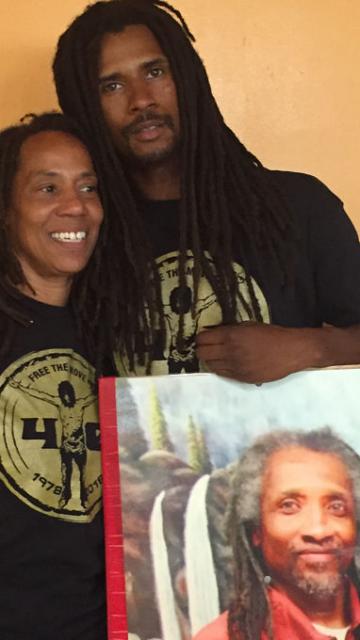 Debbie Africa with son Mike Jr. and photo of still imprisoned husband/father Mike Africa Sr. LBWPhoto
The arbitrary and often abusive practices of authorities that drove clashes between MOVE and Philadelphia City authorities were evident in the parole release of Debbie Africa – a parole granted after eight previous parole rejections.

Debbie and fellow MOVE members Janine and Janet each saw the Pennsylvania Parole Board on the same day. Each had similar unblemished prison records, each were credited with positively mentoring other inmates, each were praised for helping keep calm in the prison and each – for the first time ever – had a release recommendation from Philadelphia’s new District Attorney.

But the Parole Board rejected Janine and Janet while that Board released Debbie during a process that is completely secret even from lawyers representing inmates.

One reason given by the Parole Board for the rejection of Janine and Janet was they received a negative recommendation from Philly’s DA – a claim that is factually inaccurate according to Brad Thomson, the lawyer who represented Debbie, Janine and Janet during that parole proceeding.

“It is shocking that Janet and Janine were denied parole. Their circumstances and institutional records are nearly identical to Debbie’s,” stated Thomson, who attended the press conference with Debbie and Mike Jr.

“The decision to deny Janet and Janine appears arbitrary and it is difficult to understand how the Parole Board could justify it based on the facts that were presented,” noted Thomson of the People’s Law Office in Chicago.

Then again, arbitrariness and abuse riddled the MOVE 9 trial. The judge who convicted and sentenced the MOVE 9 during a non-jury proceeding said he meted out identical sentences because they “were a family” and that he therefore would sentence them as a family – a stance that made a mockery of the so-called maxim of prison time fitting the crime.

Police testimony during that long trial was that only the four MOVE men were armed and the MOVE women, including Debbie Africa, were merely holding children while huddled inside the basement of the then MOVE compound in Philadelphia’s Powelton Village during that 1978 shootout.

(Evidence furthermore indicates that police gunfire accidentally killed the policeman. Police experts could not match the bullet removed from the slain officer to any of the weapons recovered from the MOVE compound.)

The arrest and imprisonment of the MOVE 9 unleashed a chain of events that culminated in the horrific May 13, 1985 incident where Philadelphia police bombed another house occupied by MOVE members and deliberately allowed an inferno sparked by that bomb to burn, preventing fire fighters from trying to put it out. 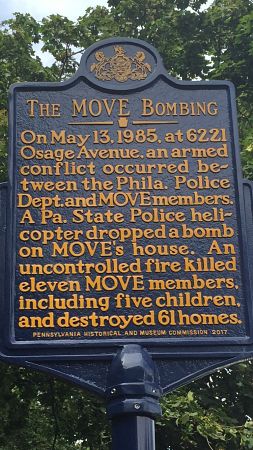 Police snipers drove some MOVE members who tried to flee their burning building back into the inferno where temperatures reached 2,000-degrees. Only one MOVE adult and one child escaped that deadly firestorm.

One of the MOVE members murdered by police action during that 1985 clash was MOVE founder John Africa. The five youth deaths included the children of Janine and Janet, Debbie’s now former cellmates. No Philadelphia police officer or City official faced prosecution for that incident where an FBI agent supplied the main component for that bomb — military C-4 hi-explosive — that Philadelphia police dropped from a Pa State Police helicopter.

Debbie Africa said she is looking forward to strengthening bonds with her children and grandchildren. She will adjust to life outside prison like learning how to use a cell phone, a now ubiquitous device that didn’t exist at the time of her arrest in 1978. And she said she would work for the release of her imprisoned MOVE family members.