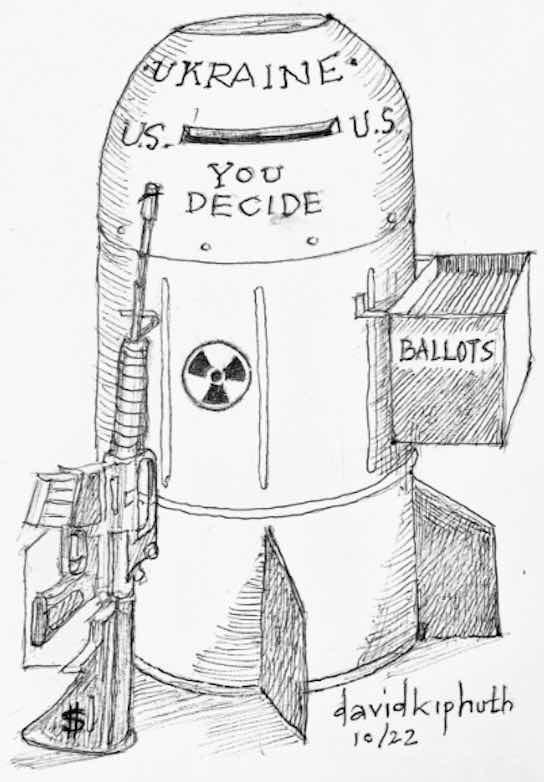 Russian president Vladimir Putin is playing a dangerous game by making threats to use ‘small’ so-called theater nuclear weapons with explosive power just a fraction of the power of the city-busting bombs the US used on Japan in August 1945.

But so is the White House and the Pentagon playing a dangerous game in having unidentified “Washington officials” tell US journalists that, as CNN put it in the lede to their story, “The likelihood…Putin will use a tactical nuclear weapon in his struggling war in Ukraine is perhaps the highest it has been since Russia invaded in February — but is still not probable.”

These unidentified “intelligence” officials are claiming Putin would not likely use such nukes, which as in the US nuclear arsenal, can be ‘dialed down’ to as small as 0.5 kiloton or as large as 100 kilotons (the “Fat Man” plutonium bomb that leveled Nagasaki on Aug. 9, 1945 was measured at 21 kilotons, for reference), based on the assumption that global pariah status, further sanctions, and the likelihood that such small nukes would lead to a major NATO response, even if it were non-nuclear, would deter him, not mention increased domestic opposition to nuclear war and opposition from the Russian military.

But these are all basically wild guesses, and a thin reed on which to bet US national policy. 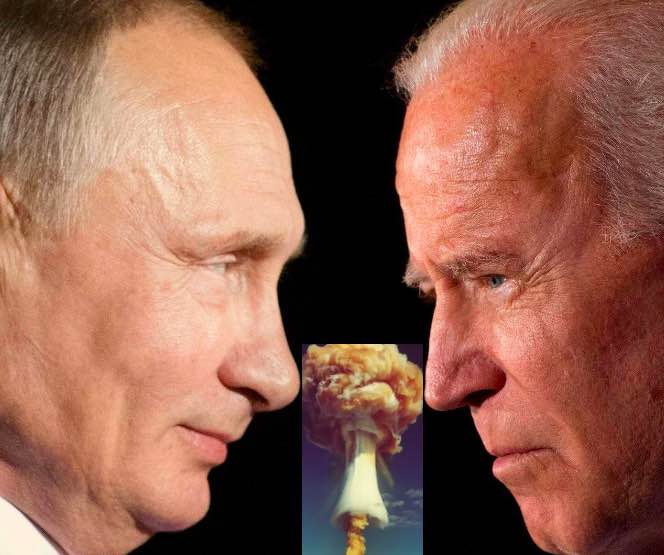 Left out of the Washington calculus is the extent to which the US’s seemingly endless willingness to supply Ukraine with advanced offensive weapons to defeat Russian troops — weapons whose cost is approaching the entire annual budget of the Soviet military — is cornering Russia’s autocratic leader.

A cornered leader is not the same as a rational leader. Do we know that Putin isn’t feeling cornered? Do we know that if he thought he’d be ousted for a collapse of his “military action” in Ukraine Putin wouldn’t turn to using a few “small” nukes to try and turn the tide in his favor?

No, nobody can know that.

And US officials are on the record as having said that the US hopes to use a long inconclusive conflict in Ukraine, supported by unlimited amounts of US arms and munitions, to “significantly weaken” Russia, which is already happening.

Under such circumstances, can Washington really rule out a Russian decision to use strategic nuclear weapon?.

In my view, it’s time for American citizens, who have not really been paying attention to this crisis, content so far to suck up the government’s and corporate media’s propaganda and to wave the blue-and-yellow banner of Ukraine, the plucky underdog in this conflict.

It’s fine to talk tough in a crisis, but we have not had a situation in a long time that threatened the  US and Russia (or the old Soviet Union) going head-to- head in combat. Americans need to know that in virtually every Pentagon war-game that started with a US-Russia conflict, there was a rapid escalation to nuclear weapons, and an even faster escalation at that point to all-out strategic nuclear war.

Also, this is not our crisis, it’s Ukraine’s crisis.

If the United States is still even remotely a democracy, the issue of nuclear war and nuclear brinksmanship needs to be decided not by National Security Council and Pentagon bureaucrats operating in total secrecy, but in public, laying all the cards on the table..

Here are the crucial questions that the American people need to have posed to them or that they need to pose to themselves, and to answer truthfully, including to themselves:

*  How many US taxpayer dollars is Ukraine’s “sovereign right to self-determination” of its foreign policy worth?  $40 billion?  Because we’ve already committed that princely sum (one which is two thirds of Russia’s entier annual military budget(!),  and President Biden has been committing billions more since that time.

*  How many dead American troops is Ukraine’s “sovereign right to self-determination” worth?

*  How long a state of war with Russia are Americans ready to commit to? Because if the US spent two decades fighting in Iraq without winning, and more than two decades fighting in Afghanistan without winning — and those were states with small armys or no army at all, how long would the US have to fight Russia (assuming hypothetically that such a conflict could somehow be prevented from going nuclear)?

*  Are Americans willing to turn to nuclear weapons to defeat Russia?  (Before you answer, remember that Russia at last count said it had 5977 strategic nuclear warheads and bombs, all vastly bigger than the a-bombs bombs used on Hiroshima and Nagasaki, and all capable of being delivered to US and NATO targets. The US at the same time reported having 5428 nuclear bombs. Neither country has said how many smaller “theater” nukes it has, but they obviously number in the high hundreds or the thousands in each counry’s weapons bunkers.

* Do most Americans know that the Pentagon’s official nuclear posture includes the concept that the US ‘will not be the second country in a nuclear war to launch its missiles, but the first.”  That is (hopefully) not to say that the US would start a preemptive war against Russia (or China) oug of the blue, just because it could if it thought it could pull such an atrocity off without a risk of retaliation. Rather it means that in a crisis, when both countries had their missiles on hair-trigger alert (sound possible?), that it would act first rather than risk having its own missiles attacked in their silos and missile-launching submarines. Do Americans want the country to have such an insane policy, when just launching one country’s missiles, even if there is no possible retaliation, would destroy life on the planet?

Anyone who answered NO to any one of these important questions should be demanding that the US stop worsening the crisis by continually providing more and deadlier weapons to Ukraine, and instead start pressing for a ceasefire and negotiations to end this fratricidal conflict.

If you’re having trouble thinking these questions through, let’s do a thought game;  Say you saw two strong guys fighting brutally quite obviously hurting each other badly. One, the bigger guy,  already has a broken nose, bleeding profusely The other, who has gotten the worst of it has a broken jaw — his mouth hanging askew and pouring from where his teeth were knocked out. They’re still slugging away. Do you step in and stop the fight, even if you might ge hit and badly hurt?  Maybe, if you are a real samaritan.  Okay. Now let’s alter the scene and have the same two guys, both armed, one with a pistol and the other with an assault rifle. They’re firing away, and both have been wounded, but so far not fatally. Do you who are unarmed step in and try to stop the mayhem?  I’m guessing not. Suppose the guy with the pistol is someone you know, and while he’s not all that great a person, he can be funny. Now do you step in, at the risk of being shot either deliberately or in the crossfire? I’m guessing the answer is no. Now go back and look at the above five questions about the Ukraine war again and try answering them.

It should be clear at this point that nuclear weapons have to go! We have been lucky for 77 years that they haven’t been used, but humanity’s improbable run of luck may be about to expire. Do we want that decision to be made by clearly wounded autocrat in Moscow, or by a bunch of ahistorical, delusional foreign policy dilettantes and national security bureaucrats in Washington?

It’s past time for a mass movement for peace and neutrality in Ukraine, and for the UN ban on nuclear weapons that has already been adopted by most nations of the world to be signed by the nine nuclear powers.

Then let’s start seriously tackling humanity’s other existential crisis; the climate catastrophe that is upon us.