This article was originally written for the website of PressTV

We Americans are taught it in school. The propaganda put out by Voice of America repeats the idea ad nauseum around the globe. Politicians refer to it in every campaign speech with the same fervor that they claim to be running for office in response to God’s call: America is a model of democracy for the whole world.

But what kind of democracy is it really that we have here?

Forget that only half of eligible voters typically vote in quadrennial presidential elections (less than 30% in so-called “off-year” elections for members of the House and a third of the Senate, and less than 25% in municipal and state elections). Forget that the government is increasingly trampling on the Constitution and its Bill of Rights, with a burgeoning surveillance program and a growing militarization of the police.

The US government doesn’t even do what the majority of the citizens want. In fact, these days it flat out ignores what we the people want.

Consider the polls, and what they show public sentiment to be on key issues, and then look at what the government, composed of supposedly elected representatives and an elected president, actually does: 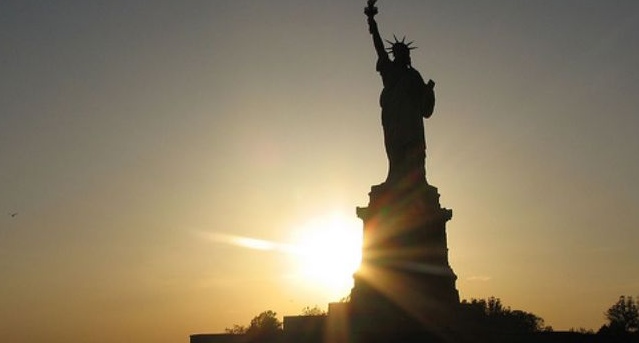 Darkness is falling for American democracy as a passive electorate lets elected leaders simply ignore them and their wishes, in favor of huge moneyed interests.

Most polls show that Americans, tired of the endless wars that have been raging almost without pause since the end of World War II, and the huge amount of taxes devoted to the military (currently over $1 trillion per year!), favor cutting the military. Just recently, the Center for Public Integrity conducted a poll and found that when asked whether they wanted to cut funding for education, veterans’ benefits, homeland security and other areas, or military spending, 65% of people said they wanted military spending to get the axe. Overall, people favored an 18% cut in the military budget. Democrats wanted a 22% cut, while even Republicans, usually perceived as pro-military, wanted a 12% cut. Of those wanting military spending cut, the largest group, 27%, favored cutting nuclear weapons funding, followed by 23% who wanted ground forces spending cut. Yet both President Barack Obama and his likely opponent in November’s election, Republican Mitt Romney, are both calling for increased military spending next year, and Congress can’t even bring itself to cut spending on a new fighter program that is both way over budget at half a billion dollars per plane, and a failure (the F-22 cannot fly safely).

Even with the passage of a sort of health care reform, the ludicrously and optimistically named Affordable Care Act, most Americans still tell pollsters that they would prefer a Canadian-style plan in which the government provides health insurance coverage for all, paid for by taxation. For decades this has been true. In 1988, a Harvard University/Harris poll found 61% favoring a Canadian-style so-called “single-payer” healthcare system. By 1990, the LA Times found support for such a system had risen to 66%, while in 1991, the Wall Street Journal found public support had reached an astonishing 69%. In 2003, the Washington Post and ABC-TV found 62% in favor of extending Medicare, the government health program for those over 65, to cover everyone. In 2007, despite decades of anti-government ideological rhetoric, CNN found that 64% favored government health insurance for all. In 2009, as the Obama administration was flat-out refusing to even discuss the idea of Medicare-for-all, or a Canadian-style health program, the Kaiser Family Foundation, which is associated with a private health insurance organization, found 58% of Americans nonetheless were in favor of a Canadian-style health program. So far, however, neither the President nor Congress or either of the country’s two political parties will even consider a national health program.

3. Social security and Medicare programs for the elderly

Last year, President Obama, who campaigned for election in 2008 vowing never to cut Social Security benefits or Medicare programs, appointed an advisory commission heavily weighted towards people who favored such cuts, and told them to come up with recommendations for “reforming” both programs. He pointedly added that “nothing” was “off the table” in terms of ideas, including benefit cuts. Right wing politicians and business lobbies have long been calling for cuts in both programs, claiming that they will “run out of money,” in a decade in the case of Medicare and in 45-50 years in the case of Social Security. What they fail to mention is that if people were taxed on income of over $106,000 a year with the Social Security tax, and if the Medicare tax, currently less than 2% of income, were raised, there would be no shortfall at all.

The public, despite all the propaganda thrown at them, and all the calls in Congress for cuts in the programs to reduce the nation’s ballooning budget deficit, are clear though. They don’t want either program cut. The most recent poll, released last week by the respected Pew Research Center, found that 60% want Social Security and Medicare benefits left alone. Only 32% said they wanted the budget deficit cut, and would be willing to see Social Security and Medicare take a hit to do it.

Never mind the public though. Nearly all Republicans, and even many Democrats, in Congress, all recipients of large amounts of corporate campaign cash, continue to call for cuts in Social Security and Medicare benefits.

4. Higher taxes on the wealthy

Back in the early 1960s, the marginal tax rate on very wealthy people was 95%, meaning that if they earned over a certain amount, the extra income was taxed at a rate of 95%. It was a period of high, sustained economic growth in the US, and also an era when the gap in wealth between the poor and the rich, and between the rich and the so-called middle-class, shrank dramatically. Since then, the tax on upper incomes has fallen steadily, and is now down at 33%, scarcely double the 15% paid by the lowest income taxpayers on their meager incomes. Meanwhile the gap between rich and poor has become a chasm.

With the US budget deficit soaring, with infrastructure crumbling, and with pressures mounting to cut important social programs like health care, education and welfare for the poor, there are increasing calls from the public for higher taxes on the wealthy again. President Obama has responded by calling for a slight increase in taxes on those earning more than $250,000 a year, back to a 35% rate that was in effect in 2000, but nobody in government is talking about seriously taxing the rich. As for the public? Poll after poll shows strong support for socking it to the wealthy. A Pew Research poll in July found that 44% favored higher taxes for those above $250,000 a year in income. Only 22% said they though such higher taxes were a bad idea. 44% also said higher taxes on the rich would be “more fair,” while 21% disagreed.

Since taking office in 2008, President Obama, who had campaigned calling for action on climate change, has done almost nothing to reduce or even slow the pace of US carbon emissions. Neither has Congress done anything. The US, internationally, has actually worked openly and behind-the-scenes to prevent any global treaty on climate issues. Yet the American people want action.

A Gallup Poll last April, for example, found that 65% of Americans support having the government impose mandatory controls on CO2 emissions, even if that meant higher prices for energy and other things. Despite massive propaganda against government involvement in industry, 66% say they favor government spending on alternative energy, including for cars. At a time when Democratic and Republican elected officials are all talking about cutting regulation of the environment, 64% also say they favor stricter enforcement of environmental regulations.

6. The war in Afghanistan

President Obama and his advisors say that even after 2014, the US will continue to have troops fighting in Afghanistan. Candidate Mitt Romney isn’t talking about pulling out of Afghanistan at all. And there is no move in Congress to stop this war that began 11 years ago, and that has become a costly quagmire for US forces. Yet only 27% of Americans in a recent poll by AP-GfK said they support that war. A whopping 66% said they oppose it and want it ended.

The propaganda from the US government about Iran’s alleged goal of building a nuclear bomb has been relentless, with most US news organizations helping it along by publishing uncontested “leaks” by officials sources, often of outright lies. Despite all this warmongering, though, most Americans still say they oppose any military “solution” to this trumped-up problem (Iran insists it is not seeking to build a nuclear weapon). According to a poll in March by the University of Maryland, published in the Christian Science Monitor, 70% of Americans said they wanted a diplomatic solution to dealing with Iran’s nuclear program. If the question was phrased to assume Iran was shown to be constructing a bomb, the result was different, with 56% supporting a US attack on Iran, but given that even US intelligence officials say there is no bomb program underway, this is not the issue.

And yet the US continues to send ever more offensive weapons to the borders of Iran, and to support covert terrorist actions inside the country, in the name of combating the country’s alleged nuclear program.

Looking at this huge disconnect between what the public wants on issue after issue and what the government actually does, one has to wonder how much different the US system is from one like China’s or Saudi Arabia’s, where there is no pretense of democracy.

Certainly Americans have the right and the ability to vote for candidates, but that alone appears not to produce what President Abraham Lincoln, back in 1865, called a government “of the people, by the people and for the people.”