Mohamed Yeslem Beisat, an ambassador for the Western Sahara, knew he faced a serious uphill struggle when he began his position in Washington, D.C. years ago as the representative for his country that is located on the northwest coast of Africa.

Beisat knew that most Americans knew nothing about the volatile circumstance that engulfs the Western Sahara, the nation that holds the undesirable distinction of being the ‘Last Colony’ on the African continent.

The little known Western Sahara sits on the Atlantic Ocean coast of Africa located south of Morocco, north of Mauritania and east of Algeria.

Morocco’s occupation of the Western Sahara features rampant brutality and discrimination directed against the indigenous population –- the Saharawi –- according to multiple reports from entities as diverse Amnesty International and the U.S. State Department. 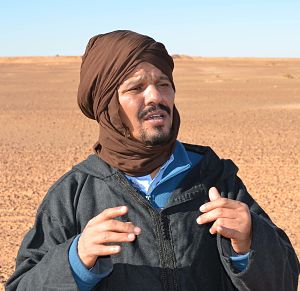 Beisat explains Morocco's Wall (in background) during 2014 visit to Western Sahara
Morocco, since its 1975 invasion of the Western Sahara, has been able to defy agreements it made with the United Nations and other bodies requiring Morocco to conduct a referendum where the Saharawi could vote for either independence or alignment with Morocco. The ability of Morocco to defy that long series of official agreements to hold the referendum and/or withdraw from the Western Sahara is the result of strong support from France and tacit support from the United States.

The legal arguments and historical justifications advanced by Morocco for seizing and holding the Western Sahara have been repeatedly rejected by the U.N. and other international bodies.

Morocco, to strengthen its illegal domination of the Western Sahara, built a fortified wall sealing off about two-thirds of the country. The largest cities and all of the lucrative natural resources in the Western Sahara are located behind Morocco’s wall.

As Mohamed Beisat leaves his Washington, DC ambassador post for a new position within the Western Sahara’s government-in-exile he is able to count some successes, from Capitol Hill to community-based initiatives, in that uphill struggle he has confronted.

“A bi-partisan Congressional Caucus on the Western Sahara was established under the leadership of two prominent lawmakers: Democrat John Conyers and Republican Joe Pitts. Conyers is the only person on Capitol Hill who had Rosa Parks work in his office,” Beisat stated in a recent email to ThisCan’tBeHappening.net. That email also listed other House and Senate members who have been supportive of resolving the Western Sahara controversy under the terms of the long-defied United Nation’s peace plan.

“Committees of Western Sahara Friends have been established in California, Florida, New York, Washington State, Washington, D.C. and Wisconsin where concerned citizens are getting organized to voice their concern about peace and justice in the Western Sahara.”

Beisat characterized his tenure in Washington, D.C. as very enriching.

“DC is a clubby city dazzling with lobbies and pressure groups. It is a jungle of lobbies. But at the same time it is full of good people who are passionate about peace and justice and about Africa,” Beisat stated.

“When I hear American politicians speaking about international peace, the rule of law and universal human rights I get very happy because that is all the Saharawi people want,” he noted.

“But when I see their daily action and silence regarding Morocco’s abuses I get depressed. America is its best enemy!”

Democratic presidential candidate Hillary Clinton, a former U.S. Secretary of State, is an example of a leading U.S. figure who makes statements supportive of democracy but who then supports Morocco’s undemocratic oppression of the Western Sahara.

An investigation of Hillary Clinton’s dealings with Morocco by the news site Politico posted in May 2015 stated, “It’s certainly true that the Clinton’s have had a long and lucrative relationships with Morocco.”

That Politico investigation noted Morocco’s substantial contributions to the foundation established by the Clintons along with supportive statements Clinton made about Morocco regarding the Western Sahara when she served as Secretary of State for President Obama. Clinton, for example, spoke favorably of a Moroccan proposal to grant autonomy to the Western Sahara, a calculated scheme that would void Morocco’s previous agreements to permit a democratic referendum offering a choice between independence and continued control by Morocco.

Hillary Clinton has denied that Moroccan contributions to the Clinton foundation influenced any of her decisions as Secretary of State. Clinton (just as she denies that $650,000 in “speaking fees” from Goldman Sachs have influenced her policy towards the nation’s largest banks) has also denied that her relationships with the King of Morocco would influence any policies on Morocco/Western Sahara if she were to become President of the United States.

A February 2014 article in Foreign Policy magazine stated that since 2007 Morocco had “spent roughly $20-million lobbying policy makers and soliciting sympathetic coverage from journalists” on all issues related to Morocco “including the Western Sahara.”

In 2013, for example, Morocco spent $4-million on direct lobbying of U.S. lawmakers according to the U.S. Justice Department. That sum placed Morocco sixth on the list of countries spending money to influence U.S. lawmakers.

Ambassador Beisat characterized himself as a “big fan of America” especially its values of democracy and liberty.

“I believe that America dominated the world not because of nukes and missiles. They did that because of their great universal values of democracy, human rights, self-determination and an anti-colonial stand.”

In leaving Washington, DC Beisat hopes the President Obama will end the illegal Moroccan occupation of the Western Sahara by pushing the King of Morocco to end his refusal to comply with the repeated agreements his monarchy made with the United Nations and other international entities.

“Obama is a real hope for us. We do hope that before he leaves office he can do a historic contribution to end this sad chapter of colonialism in Africa.”