When Donald Trump referred to countries like Nigeria and really, all of Africa, and the long-suffering island of Haiti in the Caribbean as “shitholes” to a bunch of stunned members of Congress yesterday, he was not just showing his deeply-rooted ugly racist self, but also his profound ignorance about the world — and his own country.

The truth is that yesterday’s “shithole countries” often become today’s modern success stories. Norway is a case in point. As late as the early 1960s, Norway, as Paul Thornton, a columnist for the Los Angeles Times, himself a descendant of Norwegian immigrants to the US, writes, once was “the shithole of Scandinavia,” its people viewed by more prosperous and modern Swedes and Danes as poor, ignorant farmers, Then the country struck oil in the North Sea, and since then, avoiding going the route of many oil-producing nations, has become one of the richest countries in the world on a per-capita basis, with a standard of living about 25% higher than ours here in the US, and with the wealth much more evenly and fairly distributed, too.

Why can’t the US get immigrants from Norway, instead of “shithole” countries in Africa and the Caribbean, the president asked? Well, because nobody in Norway, with its gold-plated free national health care system, excellent and well-funded retirement system and educational system, etc., would want to live here, duh. In fact, Thornton says many second and third-generation Norwegians living in the US are looking at whether they might have a chance of getting citizenship rights in Norway these days.

I know what I’m talking about. Back in 1991 when my I got a Fulbright professorship to China and moved for a year with my family to Shanghai, which at the time was one of China’s wealthier cities, the place was, frankly, what you’d call a “shithole.” Most people, including professors at Fudan University, a leading institution of higher education where I was placed to teach journalism, were living in one or two-room concrete flats with no heat and only cold water, often without even a private bathroom or kitchen. (Our daughter’s local elementary school had no heat either, so in the winter, they left the windows open to warm the classrooms up during the daytime, while the kids wore gloves with the tips cut off so they could use their pencils.) As for working class people, many were living in far worse accommodations. The air in winter was filled with soot as people tried to keep warm with charcoal stoves in their apartments, which caused everyone to suffer wracking coughs, myself included.

Meanwhile, the streets were clogged with millions of bicycles every day because there was only minimal public transportation in the form of rickety buses that were packed as tightly as canned sardines and that had to crawl their way through rivers of people pedaling their bikes slowly to and from work, often for hours each way.

And Shanghai was about as good as it got. If you went into the countryside, peasants were living in hovels. For bathrooms, they used cramped stone public outhouses where the stench of urine and yes, shit, was so overpowering one had to take long deep breaths before entering, and then hope to be able to hold it until one was done and could escape into the open air.

There are still plenty of places in China, a huge country of 1.4 billion people, that might qualify, in the president’s colorful language, as “shitholes,” but most are much better. Shanghai, meanwhile, in the intervening 25 years since I left, is a modern metropolis. Most of the bikes have vanished, replaced not just by cars and motor-scooters, but by a modern 400-mile subway system as large as New York City’s, and even a mag-lev train from the city’s center to a gleaming new international airport, which whisks passengers at a speed of 225 mph so smoothly you don’t know you’re moving unless you look at the blurred landscape out the windows.

High-speed rail lines whisk people from Shanghai to other similarly modern cities like Beijing and Guangzhou at speeds in excess of 150 mph, making it faster to go by rail from city center to city center than to take a plane.

The truth is, Mr. President, viewed from Shanghai today, America really looks a lot like a “shithole country.” It certianly looks that way from the perspective of a lot of places I’ve been: Germany, Austria, Finland, Japan and even little Taiwan for example. And despite all your talk about a huge infrastructure program, you haven’t done squat to improve things.

American urban and rural 'shitholes' in Trump's America, victims of disinvestment and neglect by governments at all levels

This is a country that has ignored its cities, allowing them to sink into decay and squalor. It has also forgotten its rural regions. And that’s not the fault of the people who live there. It’s because a corrupt political system at all levels — federal, state and local — has defunded them, leaving them jobless, homeless, and with decrepit infrastructure. I’m sure you’ll blame the local people, but truth to tell, those are in many cases the very (white) people you call “the forgotten Americans.”

You told them you were going to ride to their assistance as president, but you’ve done the opposite. Most of them are so poor they depend on our crappy Medicaid program for their health care and you and your Republican enablers in Congress are cutting that drastically, which will leave them without health care. Meanwhile, their towns are going bust trying to come up with funds to repair aging water systems, worn-out roads and underfunded, overcrowded schools. You’re doing nothing about that. Their homes are often trailers because they can’t afford a real house.

A whole generation of Americans is entering adulthood a collective $1.3 trillion in debt because there’s no system of true public higher education. Instead so-called public colleges and universities today cost almost as much to attend as private institutions. Why? Because rich jerks like you don’t think that educating Americans is the government’s job, and having an educated public is not in the national interest.

America isn’t entirely a “shithole,” because our wealthy, like you, and even the upper middle class, can hide from all the shit around them caused by government tax and spending policies that favor them over the broader mass of the population by staying safely in their gated housing communities built in economically segregated jurisdictions. But that leaves the rest of the country going to the dogs while those in the gated and segregated communities like you don’t give a shit.

Eventually, the way things are going, you’ll be presiding over a “shithole country” yourself.

We’re pretty close to being there now, in my opinion, with more than half of each year’s entire federal tax take going to fund a bloated military that it looks like you want to keep sending off to the far corners of the earth to make shitholes out of other already struggling lands.

Matter of fact, a number of the places you consider to be “shitholes,” like Haiti, Angola, the Congo, and probably Yemen and Libya, are suffering from grinding poverty in large part because of the actions of this country. Look it up. The US actually ran — and stole blind — the country of Haiti from 1915 to 1934, and has treated it as a colonial possession since then.

As for Libya, everyone knows the US simply destroyed the country and left it a failed state, mired in internal conflict and virtually ungovernable.

You’re continuing the same process (begun by President Obama) in Syria today, and are doing it by proxy by arming the Saudi Arabian military in its vicious war on Yemen.

Actually you’re doing your best to make a “shithole” out of the American colony of Puerto Rico too, by denying effective and massive aid to that island that has been destroyed by two epic hurricanes in the space of two weeks. Basically you just offered them rolls of paper towels. Nice.

How are such places supposed to rise up and modernize themselves? They need our help, not our condescension and mockery. which is all you’ve got on offer.

In fact, maybe your administration’s motto should be “Make the world shittier, and America too.” You’re already well on the way to succeeding at it. Hey, you’ve already made it okay for the Washington Post and the NY Times to write “shithole” in their main news articles and even their headlines.

You’ve even made it okay for a newspaper like your hometown tab the NY Daily News to put you on the cover as a turd with hair and to call you “S**t for Brains”! That’s something nobody would have dared to do even back in the days of yellow journalism: 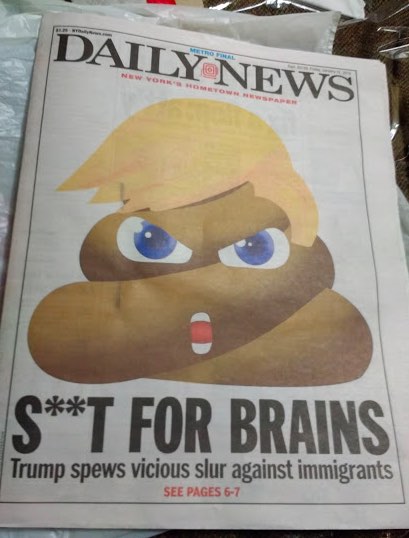 Millions of New Yorkers saw this on newsstands on Jan. 12