If you are one of the approximately 280 million people with Yahoo email accounts, your email was scanned for content and possibly turned over to the U.S. government. Yahoo, on Tuesday, admitted that fact.

Reuters revealed on Tuesday that the Internet mega-company (which is now being purchased by Verizon Communications) designed a special program last year to capture and scan all its users’ incoming email after being ordered to do that by the either the NSA or FBI. It deployed the program over the last year, scanning every piece of email Yahoo accounts received and apparently turning over all email that contained any of the tens of thousands of “keywords” the NSA considers suspicious.

The decision, Reuters says, was made by President and Chief Executive Officer Marissa Mayer, in collaboration with people in her legal department. It wasn’t without controversy: several Yahoo top staffers left the company including Chief Information Security Officer Alex Stamos (who left for a top job at Facebook). 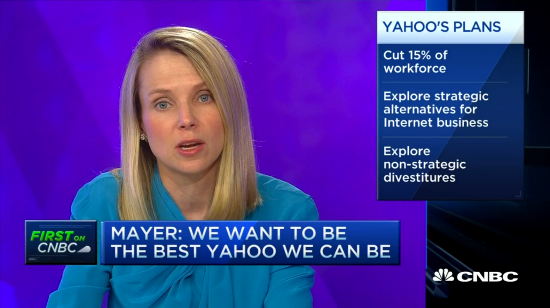 Yahoh Chief Mayer — She left out "scan all user email"

The news is startling for several reasons. It’s also deceptive for some others.

* Email providers like Google (whose gmail program is a favorite source of NSA data capture) always claim they don’t do “blanket review” of email content. Yahoo is the first to openly admit that it does. It apparently made that decision because its executives didn’t think they could successfully resist the government orders.

That decision by Mayer, already under considerable pressure at the struggling corporate giant, was apparently taken without consultation with her security team. Instead, she just ordered technologists to write the data scanning software. Many in the company thought it could challenge the government orders in the courts and prevail. Several, including Stamos, fled in reported horror.

* They didn’t just review the emails, they built a special program to do it and never let their users know they were doing that. It might seem logical — after all, you don’t let the person who you’re spying on know you’re spying — but very few Yahoo users are the subject of investigations. Yahoo’s statement — that it complies with legal requests — doesn’t even mention the Constitution that protects your data legally and whose first and fourth amendments appear to have been clearly violated by this action.

* Finally, what do you do with all that data? While the government would contend that it was investigating illegal activity, it now has reports (at least) if not full captures on everyone. And a government that collects data on everyone isn’t a state doing policing. It is a police state.

As shocking as this revelation is, the reaction of other Internet companies has been gallingly disingenuous.

“We’ve never received such a request,” a spokesman for Google, told Reuters. “But if we did, our response would be simple: ‘No way’.”

Well…yes…”way” because Google has received thousands of NSA National Security Letters and routinely complies with them — though these letters can be issued by the NSA or the FBI without their having to obtain a judge’s warrant first, and could certainly be challenged in a court. These providers may not be scanning all the information but they will scan and turn over any information the government requests without informing the affected customer.

A Microsoft spokesperson also chimed in, “We have never engaged in the secret scanning of email traffic like what has been reported today about Yahoo.”

No, maybe not like reported today but Microsoft also routinely complies with government orders almost never challenging them.

In a sense, the way the data is collecting (and the amount collected) — as shocking and important as that is — is probably not the most important issue. If you collect and turn over data on any user just because someone in the NSA tells you to, your respect for privacy and constitutional rights is deeply questionable. That’s exactly what all these companies do.

Yahoo’s latest scandal only underscores how little respect for our rights this industry has.

There are many cases by companies challenging the government on surveillance. Why Yahoo could choose to comply so quickly and not tell anyone about it will certainly provoked widespread circulation and analysis in the coming weeks.

That is something we should all be monitoring.

(Full disclosure: as an official of May First/People Link, I am involved in an international lawsuit challenging the NSA’s right to conduct mass surveillance in foreign countries. The “bias” revealed, however, should not surprise any reader of this website.)