The Bureau of Land Management (BLM) has been trying to convince the public that the BLM does not sell wild horses to slaughter, but the Wild Horse Freedom Federation has obtained proof that a BLM Long Term Holding contractor sold wild horses directly to kill buyer Joe Simon, who is well known for sending horses to slaughter, and who owns JS Ranch (“Farms”) in Perkins, Oklahoma.

To give a little background, the BLM uses lame excuses to remove wild horses from their federally protected Herd Management Areas while letting other “uses” take over.  For instance, BLM claims wild horses cause “degradation” to the range, but then allows oil and gas drilling (and fracking) on the same land, which does far more damage.  The BLM uses helicopters to round up the wild horses, then puts the horses in short-term holding facilities, maintenance facilities, and ultimately, ships horses to same-sex long-term holding pastures, where the public is led to believe the horses will spend the rest of their lives.

The Bureau of Land Management (BLM) has actually rounded up so many wild horses off of public lands that were designated as the horses’ federally Protected Herd Management areas, to make way for oil & gas drilling, mining and other “uses,” that the BLM now has more wild horses in same-sex holding facilities than are on public lands.

The BLM’s Wild Horse & Burro Program is facing mounting costs, too. The BLM is requesting over $44.5 million for short and long-term holding facilities in the 2013 President’s Budget. The BLM is using a loophole created by the Burns Amendment to sell/give wild horses to people who then sell the horses in a pipeline to slaughter. The BLM states that they don’t sell wild horses to slaughter, but the reality is that the agency turns a blind eye to obvious signs on documents they see, as the wild horses are being sold to slaughter.

Jim Reeves and Lyle Anderson own Spur Livestock, and have a contract with the Bureau of Land Management for such a long-term holding pasture for wild horses on private lands within the Cheyenne River Sioux Reservation in South Dakota, as well as on Indian Trust Lands administered by the Bureau of Indian Affairs.  This facility is the Whitehorse Wild Horse Long Term Holding Facility.

Wild Horse Freedom Federation received records from the South Dakota Brand Board that reveal on 11/8/2008, while under contract with the BLM, “owner” Spur Livestock sold 34 horses with “BLM tattoos” to JS Farms, owned by kill buyer Joe Simon. 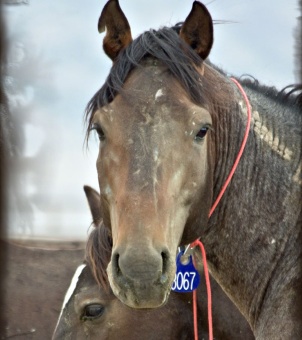 It is also important to note that if someone buys a wild horse from the BLM, they can then put their own brand on the horse, and state brand board inspectors may then note only the new brand in their records (since it is “recognized”) and not the BLM freezemark (which they don’t “recognize”), but which would identify a horse as a wild horse on public records.  State brand inspectors can thus eliminate any traces of wild horses on their official records.

Another important detail stands out.  In looking at over three years of Local Ownership Inspection Certificates of horses by Spur Livestock, Jim Reeves and Spur Livestock, this sale of 70 horses seems to be the largest sale of horses.

BLM Sales records obtained through a Freedom in Information Act (FOIA) request indicate Jim Reeves bought 72 wild horses (2 truckloads) from the BLM about one and two months before he sold the 34 BLM wild horses with BLM freezebrands and 36 branded horses directly to Joe Simon.

On the Sales Questions Document (application) form for Spur Livestock, a handwritten note at the bottom of page 1 claims: “Horses will be used as pack animals.”

How easy do you think it would be to train 11-13 year-old wild geldings (castrated stallions) to be pack animals?  If he was so knowledgeable about wild horse behavior, why wouldn’t he have bought younger horses that would’ve been easier to train?

In a telephone conversation with Jim Reeves, when asked about the 72 horses he bought as pack animals, he said “I’m told not to talk about this kind of stuff.”  He also said, “I can’t talk about this,” and “That’s BLM business.”

There’s more, too. While the information below may not involve any wild horses, it seems to show that Jim Reeves, Lyle Anderson and Spur Livestock have sold horses directly to slaughter buyers more than once.   (However, keep in mind that BLM freezemarks can be noted as “No Brand” and that a new brand may be added and recognized as the only brand, so the public has no absolute proof that these horses were not wild horses, either.)

12/4/08 – 48 “No brand” horses were sold by Jim Reeves, and 2 “No Brand” horses by other Reeves family members, to Rusty Williams in George West, Texas. (not a known kill buyer)

7/17/12 – Lyle Anderson sent 2 horses, (1″No Brand” horse and a palomino mare noted “Brand not registered.  Horse comes from No Brand Area.” to an unknown buyer (the buyer line was improperly left blank) in Pueblo, CO.

Oddly, in reviewing FOIA documents of “Animals Shipped” out of the Canon City (Prison) Maintenance facility, and comparing these to FOIA documents on BLM sales, in September, 2008, when Jim Reeves bought the 36 wild horses, records from Canon City Correctional Facility indicate that no horses were shipped out in September, 2008, only one horse the following month (October, 2008), and only 33 horses the month after that (November, 2008).  So did the 36 horses that Jim Reeves bought from the BLM at this facility just walk past a SWAT team and out a back door?

This was not the only discrepancy in Canon City Maintenance Facility records.  Tom Davis bought 120 horses in January, 2009, and Harry Vold bought 36 horses that same month (120+36 = 156), but Canon City records indicate only 4 horses were shipped out in January, 2009.

My call to Mr. Fran Ackley (Program Lead for the BLM Wild Horse and Burro Program in Colorado) for clarification on this issue was not returned.

So what, exactly, is “BLM business?”

Question #17 on Jim Reeves’ BLM sales question document was “Do you intend to resell these animals?  An X was typed in the YES box.

Right off the bat, the person in the BLM sales office should have wondered who the horses would be sold to, and for what purpose.

It was odd that although all of the answers were typed, there were handwritten notes at the bottom of the page indicating the horses were to be used as pack animals.  It seemed like an afterthought.  Did Jim Reeves write this?  Or did a BLM employee write this?  The document wasn’t signed, either.  The BLM seems to keep very sloppy legal documents.

On the Bills of Sales for the horses Jim Reeves bought, above the line that indicates Authorized Officer, the words “Virtual Migration Person” was typed in.  Who was this?

It is also unusual that the BLM’s contract with Spur Livestock (NAC070071) was dated 4/9/2007 and signed by BLM’s contracting officer, but this was almost 2 months before the Environmental Assessment (EA) was issued (July, 2007).  Usually, EAs have to be completed to determine whether or not a federal undertaking would significantly affect the environment, before a project can go forward.  Did the BLM jump the gun and skirt NEPA requirements?

Reeves is a member of the West Central Cattlemen’s Association in South Dakota.

In 2010, horse slaughterhouse pusher Sue Wallis’ now defunct United Organizations of the Horse claimed that the South Dakota Cattlemen’s Association made a “financial contribution” to the pro-horse slaughter cause.

Jim and Janna Reeves, along with Jodi Hickman, are principals in the 3J Cattle Company.

Jim Reeve’s partner in Spur Livestock, Lyle Anderson, has had a string of business ventures which the South Dakota Secretary of State now lists as “inactive.”

Anderson also owns Anderson Construction, LLC, which is listed in the Secretary of State records as “Delinquent.”

Lyle Anderson is also listed as the owner of Anderson Ranches Partnership.

In August, 2012, Reeves and Anderson appealed a decline of their application for the U.S. Small Business Administration Business Development Program.

While the BLM cons the public into believing that the captured wild horses live out their lives on long-term holding pastures, it seems that the BLM knowingly allows middlemen to cover their tracks in a pipeline of wild horses going to slaughter.

What the BLM consistently seems to “maintain” is fraud against the American taxpayer in its Environmental Assessments, a long history of inhumane handling of wild horses, lack of oversight and accountability, a waste of tax dollars, and lies to both the public and Congress. Clearly every aspect of the Bureau of Land Management’s Wild Horse & Burro Program needs to be investigated in a long overdue Congressional Investigation.

DEBBIE COFFEY is an investigative reporter with the PPJ Gazette who specializes in reporting on BLM corruption and the threat to the nation’s wild horse herds. She is also director of wild horse affairs for the Wild Horse Freedom Federation. She contributed this article, which originally ran in the PPJ Gazette, to ThisCantBeHappening!