Ever since President Harry Truman, in 1947, turned the wartime Office of Strategic  Services (OSS)  into the Orwellian-named Central Intelligence Agency (CIA)  and converted the Army’s code-breaking Signal Intelligence Service (SIS)  into the National Security Agency (NSA), this country has been in the process of becoming not even a pseudo democracy, but a National Security state.

Today, our every phone call, email, tweet, Instagram post and letter is or can be monitored and without even a court warrant or order by myriad government agents, local police,  and even private corporations that work hand-in-glove with the government.

We laugh  when President Trump, caught trying to steal secret documents which as president he was able to rifle through at will, read in bed, tear up, flush down the toilet, or cart off to his hotel and golf club at Mar-a-Lago, is defended against an FBI raid of his Florida “home,” by right-wing political supporters who say, “If this can happen to an ex-president think what can happen to you?”  (These same right wing Trump backers have long supported such police-state actions including passing the laws and confirming the judges that allow them to happen, so the hypocrisy is stunning.)

We laugh in part because we know it is already and has for a long time been happening to ordinary Americans, and like that it is now happening to a pro-law enforcement former president.   I myself found out a few years back that I had been maliciously placed on the FBI/Homeland Security Department ‘Terrorist Watch List,”  a list of over one million people whose names were reported to the FBI by any federal agency wanting to punish someone (in my case likely the Pentagon as my inclusion on the list was discovered during an international flight two months after I’d published a cover story in the Nation magazine exposing decades of massive accounting fraud and budget deception by the Pentagon.

But this Trump story is no laughing matter.  While it may be heartwarming to see the long-time criminal and shyster Trump squirming in fear that he might end up being jailed for obstruction of justice, theft of government property, conspiracy, abuse of power and who knows what else , we need to also be asking why all these top-secret or “above top-secret” documents federal officials find so “scary” to have been left in an unguarded, unlocked room in a Mar-a-Lago basement,  mixed in with bits of lingerie in Melania Trump’s bedroom closet, or scattered on an office floor, were kept secret from We the People in the first place.

It’s not the FBI raid that is so egregious. At least the Justice Department got a search warrant for that, which is more than most police agencies and prosecutors bother to do these days when raiding ordinary citizens’ homes. It’s the very secrecy of those thousands of documents that is the outrage.

Secrecy is incompatible with democracy. We’ve been living with this creping miasma of ever more secrecy, and with the metastasizing draconian laws that have been passed by Congress to deter potential whistleblowers who might consider (or to punish actual whistleblowers actually engaged in) pulling back the veil, that we take it as a given that we don’t know what the hell “our” government is doing behind our backs.

Today, a vicious war is raging in Ukraine, but most of the reasons for that war — US machinations behind the 2014 coup that overthrew ukraine’s elected government and installed a anti-Russian, neo-fascist coup government in its place, secret deals with arms dealers to arm and train the Ukrainian military, secret US military advisor postings in Ukraine, and National Security Council planning to create a new cold or even hot war against Russia — have been kept from the American people.

Why?  Russia and China are certainly not going to start one. Neither country is in a good position to attack the US, as neither has missiles based near the US while the US has nuclear bombs galore and delivery systems for them, located within minutes of both Russia and China on a fleet of Trident subs, on bases across Europe, in Turkey and the Persian Gulf, and on islands in the Pacific.  A Russian or Chinese attack on the US would be an at of national suicide, and both those countries know that.

We need to have the documents to show that the US is provoking conflict with both those countries. We need to know what the US really knows about Iran’s nuclear fuel processing capability and intentions, not the scare stories about what a nuclear Iran could or would do.  We need to know what US policy really is towards Israel’s huge nuclear arsenal — something the US government never even talks about.

International diplomacy and US international strategy should not be developed in secrecy, which has been the norm since World War II at least.  We need to have open discussions about why the US operates over 800 bases around the world, has nuclear armed aircraft carrier battle groups spread around all the seven seas, each with an air force on board larger than all but a couple of nations (not even a handful!).

We need to put an end to the punishment of whistleblowers, which has actually gotten worse over the years, with the Obama administration worse than the Bush Administration, and with a four-administration-long pursuit of Julian Assange, whose prison torment and threatened extradition to the US on espionage charges (for his  just doing the job that ordinary news organizations should have done!), is abetted by those very news organizations, which were happy to publish Wikileaks’ scoops, but now shamelessly attack the messenger who delivered them. 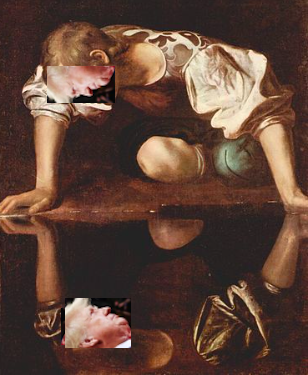 Doctored painting of Narcissus by Caravaggio

Sure Trump is a vile narcissist and sociopath who probably took those secret documents hoping to figure out a way to cash in on them somehow, but we should’t be cheering too hard. Most of them are things that were being kept secret from us!

If Donald Trump declared them all to be declassified, as he has claimed, he should now tell us what they were saying. He should be the ultimate whistleblower about the National Security State that is now trying to come after him.

Not that I expect the man to do that. He no doubt is hoping to win in a courtroom presided over by a federal district judge that he himself nominated to that position, and to be able to keep the purloined documents to profiteer on them as he no doubt intended to do, for instance blackmailing foreign leaders  with information gleaned from US intelligence services like the CIA.

What the current Trump scandal should be doing is producing a massive movement among Americans fed up with secret government. It should lead to demands for an end to secret government, an end to punishment of whistleblowers, dropping of the extradition effort to get Julian Assange and of the indictment against him for Espionage, and the release from prison and post-prison conditions on other whistleblowers, and an end to secret wars and war-mongering.

Americans want a lot from this government, but are getting virtually none of it:  real action on preventing climate catastrophe,  free public college for all, a Social Security system that actually supports a decent living standard for elders in a nation where few workers get a pension from employers, public health care for all with an end to bloodsucking private insurers, a peaceful world,  an end to mass incarceration and excessive punishments, police who are civil servants, not enforcers, schools that are safe for our children, a ban on automatic and semi-automatic guns and large magazines capable of mass-killings,  the unobstructed right of women to control their bodies, the right to form unions and to negotiate contracts free from employer retaliation, etc.

These are all things that a majority of Americans want but they cannot get them in part or even large part  because secret government is busy ignoring them and substituting a focus on national security, police intimidation,  secret meetings and deal-making with private industry, and corruption and bribes of public officials, and because the public has become inured to the idea of a government on autopilot, the workings of which they no longer have any idea.

Let’s use this moment not to revel in Trump’s legal hazards, as enjoyable as those may be, but  rather to demand an end to secret government.