A new trove of heavily redacted documents provided by the US Department of Homeland Security (DHS) in response to a Freedom of Information Act (FOIA) request filed by the Partnership for Civil Justice Fund (PCJF) on behalf of filmmaker Michael Moore and the National Lawyers Guild makes it increasingly evident that there was and is a nationally coordinated campaign to disrupt and crush the Occupy Movement.

The new documents, which PCJF National Director Mara Verheyden-Hilliard insists “are likely only a subset of responsive materials,” in the possession of federal law enforcement agencies, only “scratch the surface of a mass intelligence network including Fusion Centers, saturated with ‘anti-terrorism’ funding, that mobilizes thousands of local and federal officers and agents to investigate and monitor the social justice movement.”

Nonetheless, blacked-out and limited though they are, she says they offer clues to the extent of the government’s concern about and focus on the wave of occupations that spread across the country beginning with last September’s Occupy Wall Street action in New York City.

The latest documents reveal “intense involvement” by the DHS’s so-called National Operations Center (NOC). In its own literature, the DHS describes the NOC as “the primary national-level hub for domestic situational awareness, common operational picture, information fusion, information sharing, communications, and coordination pertaining to the prevention of terrorist attacks and domestic incident management.”

The DHS says that the NOC is “the primary conduit for the White House Situation Room” and that it also “facilitates information sharing and operational coordination with other federal, state, local, tribal, non-governmental operation centers and the private sector.”

A better description for a fascist police state network could not be written. 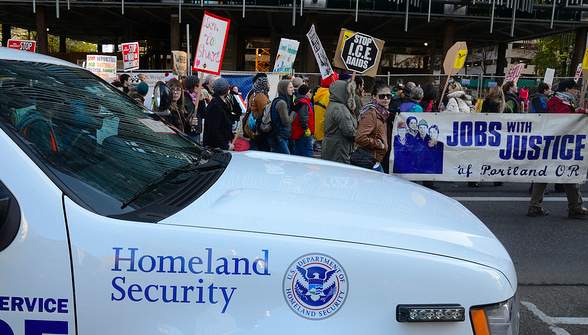 Homeland Security: Behind the Crackdown on Occupy, documents show

Remember, this sprawling yet centralized operation — what Verheyden-Hilliard describes as “a vast, tentacled, national intelligence and domestic spying network that the U.S. government operates against its own people” — was in this case deployed not against some terrorist organization or even mob or drug cartel, but rather against a loose-knit band of protesters, all conscientiously and publicly committed to nonviolence, who were exercising their Constitutionally-protected right to gather in public places and to speak out against the crimes and abuses of the corporate elite and the politicians who are bought and paid by that elite.

Among the documents obtained by the PCJF in this second batch of responses to its FOIA filing is one Nov. 5, 2011 from the NOC Fusion Center Desk, which collects at the federal level and then distributes the names and contact information of a group of Occupy protesters who were arrested during a demonstration in Dallas, TX against Bank of America, one of the nation’s biggest predatory lenders. Although none of the seven arrested were charged with any serious crime (six were charged with “using the sidewalk!”), their names and contact information were widely disseminated by the DHS.

Fusion Centers, a post-9-11 creation, are a federally-funded joint project of the DHS and the US Justice Department which are designed to share intelligence information among such federal agencies as the DHS, the FBI, the CIA and the US Military, as well as state and local police agencies. By their nature they are designed to circumvent legal constraints on various agencies, for example the ban on CIA domestic spying, or the Posse Comitatus Act, which bars active military activity within the borders of the US. There are currently 72 Fusion Centers around the US.

Another group of documents shows that on November 9, two days after a demonstration by 1000 Occupy activists in Chicago protesting social service cuts in that city, the NOC Fusion Desk relayed a request from Chicago Police asking other local police agencies what kind of tactics they were using against Occupy activists. They specifically requested that information be sought from police departments in New York, Oakland, Atlanta, Washington, D.C. Denver, Boston, Portland OR, and Seattle — all the scene of major Occupation actions and of violent police repression. Realizing that it would look bad if it assisted in such coordination overtly, higher officials in the DHS ordered the recall of the request but then simply rerouted it through “law enforcement channels,” where presumably it would be harder for anyone to spot a federal role in the coordination of local police responses. In response to that order, the documents show that the duty director of the NOC wrote that he would “reach out” to “LEO LNOs (liaison officer) on the floor” to assist. Verheyden-Hilliard explains that LEO is FBI’s nationally integrated law enforcement, intelligence and military network.

On December 12, when Occupy planned anti-war protests at various US ports, Verheyden-Hilliard says the new documents show that the NOC “went into high gear” seeking information from local field offices of the Department of Homeland Security about what actions police in Houston, Portland, Oakland, Seattle, San Diego, and Los Angeles planned to deal with Occupy movement actions.

Another document shows that earlier, in advance of a planned Occupy action at the Oakland, CA port facility on Nov. 2, DHS “went so far as to keep the Pentagon’s Northcom (Northern Command) in the intelligence loop.”

Given the subterfuge revealed in these documents that went into trying to create the illusion that the DHS was and is not coordinating a national campaign of spying, disruption and repression against Occupy activists, it is almost comical to find documents that show the DHS was in “direct communication with the White House” to obtain advance approval of public statements by DHS officials denying any DHS involvement in anti-Occupy actions.

These documents show that both DHS and one of that department’s police arms, the Federal Protective Service (FPS) were in direct contact with Portland, Oregon’s police chief and mayor, discussing how to deal with protesters who were in part on federal property. The coordination between the feds and the local police and political authorities were intense. Yet the approved statement sent to DHS from the White House read:

Any decisions on how to handle specifics (sic) situations are dealt with by local authorities in that location. If a protest area is located on Federal property and has been deemed unsanitary or unsafe by the General Services Administration (GSA) or city officials, and they make a decision to evacuate participants — the Federal Protective Service (FPS) will work with those officials to develop a plan to ensure the security and safety of everyone involved.

There was, comically, also a White House-approved DHS “background” statement, too! (Typically background statements by federal officials are supposed to be used when they want to tell a journalist the true situation but don’t want to have that statement attributed to them or their department. Having it pre-approved by the White House defeats that purpose and is simply a manipulation of the media.)

Tellingly, the documents also include a Dec. 5 copy of the “Weekly Informant, ” an intelligence report published by the DHS’s Office for State and Local Law Enforcement. The issue includes an update from the Police Executive Research Forum (PERF) concerning the activities of the Occupy Movement. PERF, Verheyden-Hilliard notes, is the group that the federal government claims organized a series of multi-city law enforcement calls to coordinate the police response to Occupy, which led immediately to the wave of violent crackdowns. It was at those meetings that police were advised among other things to act at night, to use aggressive tactics and weapons like tasers and pepper spray, and to take steps to remove journalists and cameras from the scene of crackdowns.

The overall sense from these latest documents is that Washington and the DHS, along with the FBI, was the nexus of the crackdown, orchestrating it, encouraging it, and attempting to cover its tracks.

The documents among other things expose the massive hypocrisy of the Obama administration and the Democratic Party, which this election year have tried to co-opt and claim as their own the anti-fat-cat theme of the “We are the 99%”-chanting Occupiers, while actually acting in the interest of Bank of America and its fellow financial sector mega-firms in trying to crush the movement itself.

To see all the new FOIA documents, go to the PJIF website.