Benalmádena — Seven hundred and seventy primary and elementary school children, aged three to 12, walked and skipped three kilometers to the main square (Plaza de España) here in this town located n in Spain’s Andalusia province, and back to their municipal school, Jacaranda.

On this 30th march for international peace in commemoration of the day that Mahatma Gandhi was assassinated (January 30, 1948), the children sang “No to War”, “Yes to Peace”, “Save the Children,” “Friendship Yes, Violence No”. (The event was postponed a week due to a storm.)

They were accompanied by their 29 classroom teachers and about 100 parents and grandparents.

For a week each January, these students study peace, solidarity and friendship values, and how to protect Mother Earth from man-made pollution. The day dedicated to “Save the Children” includes students asking their parents for donations of funds and clothing for poor children. Since 2011-2, they have raised some 7500 Euros ($8500). A committee of teachers and parents decides where to send the donations, sometimes in Spain and sometimes abroad.

I have participated in hundreds of peace activities but never one where the prime activists are young children. I asked some children and parents what marching for peace means to them.

Ten-year-old Julia made the T-shirt design for last year. “I love peace” is centered on the blue shirt, and “We must all work to create peace” is the co-slogan. All words are in Spanish and English.

Julia tells me, “We can’t get peace in the world without everyone together, building for it. I just thought about that when I drew.”

This year’s T-shirt is pink. A dove is flying leading three children wearing shirts with a peace sign, a heart and a smile, and the words: peace, respect, solidarity, equality, happiness, friendship and love.

Along the march, I meet up with Carmen, Jonathan, Tillie and Dario ages 11-12. Their collective voice speaks gleefully: “Togetherness is beautiful. Racism and machoism are wrong.”

Lise, 4, feels that marching is “fun”. Her teacher adds, “Teaching peace can be fun. Teaching war is not.” 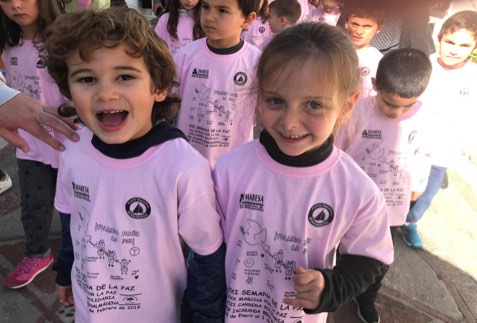 One mother tells me, “We are so grateful for this school, because it focuses on developing a consciousness of peace and friendship, of love, really. We do not make wars; it is the politicians. War for oil. This,” says the parent, opening her arms as to embrace the hundreds of children assembled before the march began, “this is life.” Her husband adds, “Not forming Hitlers and Francos, and those of today’s times.”

A Polish couple moved from their country to Benalmádena, in part to get away from warring conflicts. Carolina and Robert tell me as they march, “We must help create a future, and this school is one way of doing it. Wars are for politicians and the rich. Here the children are stimulated with peaceful thoughts.”

Thirty-year old Carmen walks beside her husband and her father as they follow their two children and grandchildren. “I bring my children to this school because of the values they teach,” Carmen says. “The academic part is OK but the best is the morality that is taught, and done so without authoritarian finger pointing. The teachers let our well-nourished children know that other children in the world die of hunger, others barely live with little nutrition; many live with fear and in violent danger. They are helping our children become conscientious adults. This is humanitarian, this is caring, and one day our children may make a real difference for peace.”

One of those kids, 9-year old Karin, tells me, “We are happy to have our parents help other children no matter where they are.”

At the Plaza de España, the children sing and dance to cheerful songs, waving their arms and stepping in tune. I ask a local policewoman what she thinks of the children’s peace march in the context that her government is killing people in the Middle East. “It is not ‘my’ government. It is the world government making wars. We need more love and peace.”

Three children read manifestos for peace that 6th graders had written in Spanish and English:

“Peace needs education with values, behavior and attitudes that allow personal and social harmonia, refusing all types of violence.

“Many wars could be avoided through dialogue, reaching pacific agreements that could benefit us all. When it comes down to it, we are all equal human beings, born of a father and mother: tall and short, blond and brown, with round or extended eyes, with different colors of skin.

“It is not enough to talk about peace. We must believe in and work for peace. The children and adults of Jacaranda are ‘peaceniks’. Each year we join hands and march through the streets of our beautiful town, traveling a common path of solidarity and joy, offering our grain of sand for peace in the world.”

A second statement, read in English by a 12 year-old girl, states:

“If you look up the word peace in the dictionary, it speaks about tranquility and non-violence…a synonym might even be a truce. I think Peace is far more than a truce… If we are to achieve peace, we have to make a difference.

“Peace is the feeling that everybody wants to enjoy in the world. How do I feel it? When everyone around me in my family, my circle of friends and my neighborhood is happy, eager to love, to accept and relate…then I feel at peace…Peace starts with me, and begins with a smile.”

The day’s peace activity ends by freeing doves from a cage, and with tears on many adults’ cheeks. 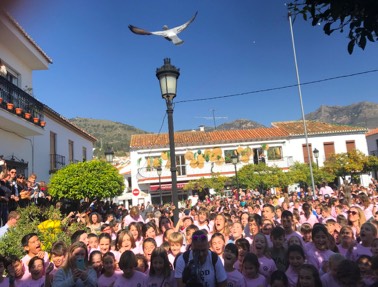 While the school is state funded, it has its own values, not necessarily those of the Spanish state, which wars against several countries in the US-led so-called “coalition of the willing against terrorism”. Nevertheless, the town’s mayors and other members of the town council are always present at the square where students sing and read their manifestos for peace. (Spain’s King Felipe VI recently made a trip to Iraq. He is the first Spanish monarch to visit Iraq in 40 years. He went to encourage his occupying troops in the “cradle of civilization” devastated by the invasion since 2003. The current Iraqi government wants the “coalition of the willing” to leave its war-torn country. Spain has fought beside the US in its wars since 1992 against Somalia, Bosnia, Kosovo, Afghanistan, Iraq and Libya. It warred against Afghanistan from 2002 to 2015 where 102 of its soldiers died.)

Before the peace march, I discussed with the school’s principal, Juan Luis Castro, and head teacher, Camino Albillos, how it can be that the state wars against people (who have not attacked and do not threaten Spain) while this public school rejects wars and teaches peace.

Camino explained, “Our 1978 constitution sets down principles of working for peace, and gives public school administrators and teachers the freedom to teach, and to help develop alongside with parents their own religious and moral values.”

Here’s my translation of that part of the Spanish constitition’s preamble:

“The Spanish Nation, wishing to establish justice, freedom and security and promote the well-being of those who make up the nation, in use of their sovereignty, proclaim the will to…Collaborate in the strengthening of peaceful relations and effective cooperation among all the peoples of the Earth.”

“Everyone has the right to education. Freedom of teaching is recognized. 2. Education shall aim at the full development of the human personality in respect of democratic principles of coexistence and fundamental rights and freedoms. 3. The public authorities guarantee the right that assists parents so that their children receive the religious and moral training that is in accordance with their own convictions. 7. Teachers, parents and, where appropriate, students can intervene in the control and management of all centers supported by the Administration with public funds, under the terms established by law.”

The principal told me, ” We teachers learn to teach through our students. We don’t have a particular doctrine but we view all humans in a holistic manner, such as did Rudolf Steiner and Maria Montessori. Today, it is called emotional intelligence, or creative intelligence. Most teachers want peace. We hope our children will grow to be critical thinkers, not sheep but full humans who question, who are active in finding solutions to problems we have, and to protect the earth. We are an ecological school.”

The founders of the school named it after the blue-flowered tree. They placed emphasis on teaching values of peace and solidarity, and using teaching methods formulated by Steiner and Montessori. The founders chose the peace march to mark the day Gandhi was murdered. The UN International Day of Peace (September 21), and the International Day of Non-Violence (October 2) also honor peace efforts and the life of Gandhi.

Principal Luis Castro told me, “Our laws allow our teaching methods and values. Many other schools in Spain practice these ideals and forms as well, though there is no network. The state decides on general curricula. We have the liberty to respect universal values: violence is no solution to conflicts. We do not enter into the particular foreign policies of the various political parties and governments, but we do not justify what they do when using violence and warfare. We say humans must reflect and discuss, empathize with one another, respect humanity and the planet.”

Jacaranda morality seems to work for the many thousands of children who have attended the school through it’s 30 history. “We do not have bullying here, nothing that has required implementing the protocols required for such bad treatment of one another,” concluded Camino. “We have learned from the terrible years of fascism and Franco,” added Juan Luis.

Ron Ridenour is a journalist and activist and occasional contributor to ThisCantBeHappening!. After working as a journalist for years in his native United States, he left to live and work in Cuba before settling in Denmark. Author of a number of books, his latest is, “The Russian Peace Threat: Pentagon on Alert”. www.ronridenour.com; ronrorama@gmail.com