Football players are a special class of workers. Even the lowliest of them make six-figure salaries, at least for the short time they stay healthy enough to play, but they are, nonetheless workers, and unionized workers at that.

And what is happening right now — with NFL players, black and in some cases white, and now professional basketball and baseball players too, acting in solidarity to protest racist policing and other issues of equality denied in America by not standing for the traditional performance of the Star-Spangled Banner, and with the subsequent incendiary calls by President Trump for the firing of these protesters by team management — is shining a light not just on the racist politics of the president, but on the wholesale lack of First Amendment freedom on the job for most American workers.

The reality is that workers in the US, unless they are represented by a labor union — and even then only a powerful and assertive union — speak their minds at the risk of being fired, and have no recourse if they are fired for the opinions they express if those opinions aren’t shared by the boss.

Freedom of speech, that hallowed and much touted supposed birthright of all Americans, actually only applies during the hours that that we are sleeping, traveling to and from work, on our days off, or at home. And even then, as people are discovering with employers monitoring their personal blogs, Facebook pages and Tweets, and firing them for things they may have said or written, we’re not so free
. 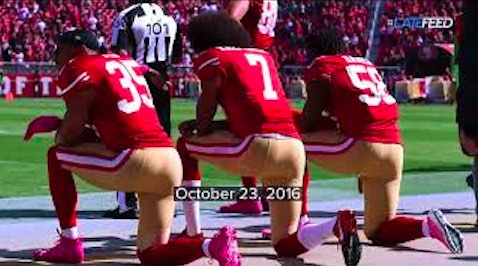 Colin Kaepernick (center) takes a knee in protest, loses his ability to play pro ball, but starts a movement

Hooray for the professional ball players who, following the lead of the heroic former San Francisco 49er Colin Kaepernick, are engaging their public protests before the fans and asserting their right to speak their minds about racism and the national epidemic of police brutality against and murders of African Americans.

Now this burgeoning struggle for the freedom to speak out has to move out of the sports stadiums and into the workplaces of America.

You can tell such a movement is badly needed when the self-styled “patriotic” yahoos in the stands boo and shout “stand up!” at kneeling athletes speaking their mind on the job and don’t get upset when millionaire Treasury Secretary Steven Mnuchin scolds the protesters, telling them to do their free speech thing “on their own time” and not on the bosses’. These white “NASCAR dudes” don’t even realize that everyone — including they themselves — should be demanding First Amendment rights on the job, and that the ball players they are condemning and jeering at are making that case for everyone’s benefit.

What this football protest has demonstrated is that when one person takes a stand on the job and makes a statement as Kaepernick did last year, it may cost that person her or his job. But when lots of people take the stand together, the boss can’t retaliate so easily. In fact, the boss may even join them.

Blacklisting Kaepernick, as the NFL’s teams appear to all have done, may cost a couple of teams a badly needed crack quarterback (and everyone agrees there are teams that could use him), but it isn’t really costing any team any money or lost ticket revenue to let him stay unemployed. Now that whole teams are taking a knee, or refusing to enter the field for the opening patriotic display and the singing of the national anthem, though, there’s no way to fire them without trashing the season and losing millions of dollars.

If workers want to finally do away with totalitarian policies in the workplace, they need to start taking a page from their sports heroes and begin speaking out collectively on the issues that matter to them. It has to be a collective effort though. Maybe it is the dirty washrooms. Maybe it’s unfair pay for women or minorities. Maybe it’s the endless war in Afghanistan. Maybe it’s police brutality in the local metropolis, or toxic waster in the local water supply. Whatever the issue, like-minded workers need to start talking about it, wearing T-shirts declaring their views, demanding that the company that employees them stop supporting policies they object to. Whatever the issue, if you can talk about it on the street or at home, you should be able to talk about it where you work and where you spend most of your waking hours each day!

The Constitution says it clearly in the First Amendment:

“Congress shall make no law…abridging the freedom of speech.”


Note that it does not say anything about “except in the workplace.” And yet Congress has endorsed myriad laws and regulations that allow employers to fire workers “at will,” which includes for saying things that the boss doesn’t like (they call it insubordination, which is a term that has no place in a supposedly free society). We don’t allow people to be fired for being of the “wrong” religion, or for being of the wrong race, so it’s not like there’s no precedent for Congress to limit the power of corporate bosses over their workers. But when it comes to that free speech thing, our elected officials and our judges get cold feet.

It’s ironic that many of the yahoos in the stadiums who angrily shout “Stand up!” at some football player taking a knee during the national anthem probably forget that they can’t say anything political or make a political protest on their own job. They have no rights. And for that matter, neither does the guy down on the field that they are heckling, and yet he is doing it.

And the truth is, any of those guys down there on the field in their uniforms making a pubic protest, is doing more than just protesting against some issue, like police abuse. They’re also protesting for the right of all workers to make their voices heard where they work.

The truth is, when the country was founded, there were no real factories in the new independent United States of America. It was a largely agrarian society of farmers and small businesspeople who might have a couple of employees at most. In that kind of environment, there was little difference between the home and the place of work. It’s likely that people in such settings had plenty to say on the issues of the day while they were working. It’s also likely that people who had a job and did it well were valuable enough to the employer that even if they said things that the boss didn’t agree with they wouldn’t be summarily fired for speaking up. That kind of thing is much more likely to happen in huge companies where individual workers are just replaceable cogs.

The founders who wrote the Constitution and its Bill of Rights wouldn’t have imagined that eventually there would be huge workplaces with hundreds or even thousands of workers, gates and security guards and ID cards to control access to the site, and files kept of each employee’s behavior.

It is this new work environment, created during the 19th century, that led to a bifurcated world — one largely free and more or less unmonitored, where people could do and say pretty much what they pleased without fear of punishment or harassment, and another, set up much like an old feudal estate, where the “lord” or boss and his or her minions could order the peons around, punish them at will with no right of appeal for made-up infractions or “insubordination,” and control what they could say or even think, on pain of being tossed out the door.

Things have gotten worse with our new information age, so that once a worker is fired by one boss, it can be hard to get a job anywhere, since one’s employment record becomes available to all.

It’s time to grab this new opening made by professional athletes of conscience, and to start a national campaign to extend the First Amendment to the shop floor, not just the athletic field.

While we’re at it, let’s demand that Kaepernick get hired again as a QB. After all, he started this ball rolling.