The failure of Democratic candidate Jon Ossoff to capture the vacant House seat left in a suburban Atlanta district by the Trump nomination of Republican Rep. Tom Price as Secretary of Health and Human Services shows the disastrous state of the Democratic Party.

So beholden is that party to corporate interests that it cannot put up or support any candidate who is willing to challenge its neoliberal paradigm. The 30-year-old Ossoff tried to win by appealing to the so called “moderate middle” of voters, offering vague promises of economic growth and challenges to President Trump’s policies — for example his attack on the Obama administration’s so-called Affordable Care Act. It was a stupid campaign approach, especially for a special election, when voter turnouts are typically very low and voter enthusiasm is the key. No matter: despite polls showing overwhelming American support for a Canadian-style single-payer “Medicare for All” health care system, Ossoff did not call for such a change. Nor did he mention at all the need to slash US military spending — the single biggest reason, because it lays claim to some 54% of all federal tax dollars each year, why the US is approaching Third World status by most measures such as life-expectancy, infant mortality, infrastructure, education, etc.

The question now for progressives is: What is to be done? 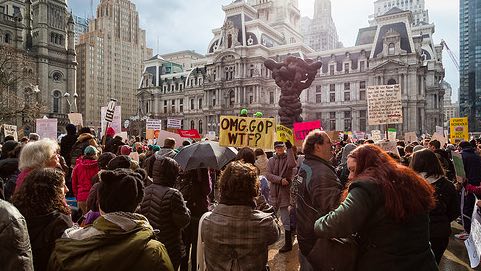 With the Democratic Party in the hands of Neoliberals and third parties kept off ballots, progressives need a mass movement stra

Clearly to be a viable and genuine opposition party to the ruling Republicans, the Democratic Party would have to be thoroughly deconstructed and rebuilt. The millionaire-packed Democratic National Committee leadership — the lobbyists, the elected officials and the well-heeled donors — would have to be tossed out entirely, and replaced by genuine progressives, labor activists, environmentalists, representatives of various minority groups and (gasp!) socialists. It would need a platform that was unequivocal and unflinching in its call for expanded and more generous Social Security benefits, for a well funded Medicare for All program, for a new National Labor Relations Act that routinizes the forming of labor unions and that safeguards, through severe penalties on recalcitrant employers, the right to bargain for contracts. It would have to stand foursquare for an emergency mobilization against climate change, and it would have to renounce the debunked neoliberal approach of coddling the rich and tossing crumbs to the poor, by standing for much higher taxes on the former and well-funded programs to help the latter. And finally, it would have to call for dramatic cuts in the military (not defense!) budget, and an end to US imperialism and militarism abroad.

This is essentially what Jeremy Corbyn and his supporters in the British Labour Party have done, but I have hard time, particularly after watching the overt and underhanded subversion of the Bernie Sanders primary campaign last year, and the inability of progressive Democrats to challenge and replace an the ossified and thoroughly discredited party leadership, imagining that this can happen here in the US with the Democratic Party, which internally is clearly anything but democratic.

An alternative would be to construct a new opposition party that could quickly move beyond just serving as convenient haven for protest votes to becoming a genuine opposition force. But as the Green Party and various socialist parties over the years have painfully learned, restrictive ballot and media access laws at the federal, state and local level, and a total lack of rules limiting corporate funding of campaigns, put in place by the two big parties, effectively give those two parties a lock on national elections, consigning third parties to the sidelines.

The only alternative then, it seems to me, is the one that the Civil Rights and the subsequent anti-Vietnam War movements used when confronted similarly with a Democratic Party that had no interest in supporting their interests and demands. That alternative is to build a movement on the streets and in local communities that presents the political establishment with the untenable prospect of ongoing mass militant opposition to which it has to respond. I would argue that the demands of such a movement this time could and must be broad and inclusive — not single-issue based as in the past. It needs to be built around demands that virtually all Americans, or at least a solid majority, can agree with. As a first pass, I would suggest the following:

* An end to US militarism abroad and at home, the closing of most if not all foreign bases, an end to all US wars and arms sales to conflict zones, and a reduction in the US military budget by 50%. As well, a call for the US to return to negotiations with all nuclear nations to eliminate these weapons of mass destruction.

* A fair, non-racist immigration policy that is generous in accepting political refugees, that doesn’t threaten with deportation those young people brought illegally into the US not by their own choice, that, while securing borders to prevent illegal crossings, is humane and follows constitutional norms in dealing with those who sneak into the country seeking work, and that, finally, recognizes and works to end the role that US economic and foreign policy plays in creating economic problems in neighboring countries that compel people to try and enter the US seeking work.

* A crash program to reduce US carbon emissions, and to help other countries do so, particularly those developing countries that have limited resources and that are being most impacted already by global warming.

* A program to shift funding for education away from its current reliance on local property taxes to federal funding on a per-student basis in order to equalize access to good public schools — an approach taken by most European countries — and a program of free college education to all who qualify for admission at public institutions of higher education.

* A jobs program modeled on the New Deal’s Works Progress Administration, to create jobs for the jobless in needed areas like infrastructure repair, parks maintenance, environmental clean-up, school safety monitoring and the like.

* A break-up of the too-big-to-fail banks, re-passage of the Glass-Steagal Act separating banks and investment banks, and a reinvigoration of anti-trust law to prevent the creation of monopolies or oligopolies, and undo those that already exist.

* Elimination of the cap on income subject to the Social Security (FICA) payroll tax, and addition of a 0.25% transaction tax on all stock and bond trades except in tax-advantaged retirement plans, a much higher capital gains tax and a restoration of the inheritance tax to apply to all inherited wealth above $100,000. All these new revenues would be used to raise Social Security benefits sufficiently to ensure for the first time a decent income for all Americans in retirement.

I believe that a such national movement, which must be grass-roots, democratic and locally based, if it organized frequent mass actions both in Washington and in the states and municipalities, swarming of Congressional offices both in the capital and in home districts, and pressing candidates during election years, would compel at least the Democratic Party, and perhaps even many Republican office-holders, to act, even if they hold antithetical political views.

The key is to avoid being co-opted by the Democratic Party, and to remain an independent movement.