I read of your firing as a low-level national security adviser in the White House thanks to your “snarky” tweeting about various Obama administration officials above you in the pecking order.

I understand you are contrite and a bit embarrassed and said that your tweeting escapade as @NatSecWonk started as innocent fun and turned into something else. Even the New York Times reporters who told your story on their front page today seemed hard pressed not to treat it comically. The headline was: “White House Official’s Career Twitters Out.” Twittering out is hardly a dignified downfall. In the annals of schadenfreude over the downfall of promising national office holders via the internet, at least you did not tweet anyone images of your penis. 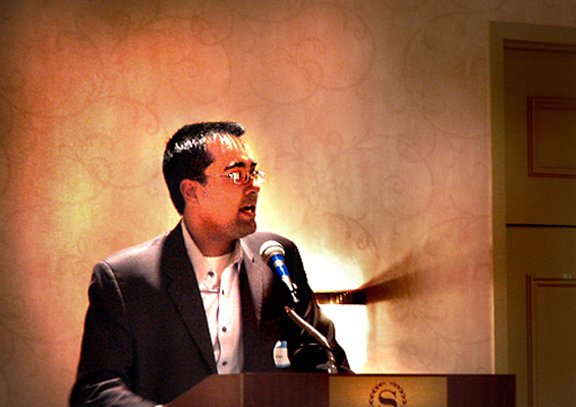 From here on out I’m going to treat your situation seriously, since I feel your predicament is instructive. I know you and your wife certainly see it as serious, since she remains on the Washington national-security-state power merry-go-round.

On the Rachel Maddow Show Wednesday night, yours was not the only Twitter-based story. Maddow gave much more time to, and was quite laudatory about, a tweeter named Tom Matzzie, a man who once worked for MoveOn.org.

Mattzie made blow-by-blow tweets from a Washington to New York Acela train of a loud, off-the-record cell phone interview being given in the seat directly behind him. The interviewee, Michael Hayden, as you must know, was the NSA director under President Clinton and CIA director under Presidents Bush and Obama; he now works for the Chertoff Group, which according to its website, “provides business and government leaders with the same kind of high-level, strategic thinking and diligent execution that have kept the American homeland and its people safe since 9/11.”

When Hayden was informed via his cell phone that an ordinary schmuck had just done a surveillance job on him from the seat ahead, the master spy introduced himself and graciously posed with Matzzie for a photograph. As any good spy knows, it’s important to always remain cool and make the best of things when caught with your pants down. (The photo is at the end of this missive.)

In your case, you assumed the role of an anonymous insider making snide comments about Hillary Clinton on Benghazi, John Kerry, Susan Rice and others. This is how you described yourself: “Unapologetically says what everyone else only thinks. A keen observer of the foreign policy and national security scene. I’m abrasive and bring the snark.” Snark comes from Lewis Carroll’s The Hunting of the Snark, and the word is defined as “an imaginary animal (used to refer to someone or something that is difficult to track down).”

Here’s your August 9 tweet concerning UN Ambassador Samantha Power — or “Sam” as you refer to her:

“It’s pathetic how @AmbassadorPower keeps tweeting on Syria when her own President refuses to do anything about it. You’ve sold out, Sam.”

The question whether or not Ms. Power has sold out is a good one that should be dealt with seriously. The late Howard Zinn and others have criticized her for downplaying US collateral damage in her genocide book. President Obama, as you point out, opposed her on Syria by deciding against bombing raids and, instead, went with the Putin peace plan directed at eliminating chemical weapons. You may have felt she did not fight hard enough for bombing.

Ambassador Power, as you know, is a formidable writer with a Pulitzer Prize for her book called A Problem from Hell: America and the Age of Genocide and the author of Chasing the Flame: Sergio Vieira de Mello and the Fight to Save the World, an admirable biography of the Brazilian UN diplomat tragically blown up in George W. Bush’s grand national security blunder in Iraq.

Since she advocated US military force against Syria, my question concerning Ms. Power is whether she is a true humanitarian who understands the evil of our current world so well that she sincerely sees the US military as a tool for good — or whether she’s just another academic like Henry Kissinger seduced (no pun on her name intended) by power. The jury is still out.

This gets me to the point of this letter — the lofty struggle between Power and Truth. This struggle is played out every day in Washington DC as the United States must balance the much beloved Myth of American Exceptionalism and our imperial, military history with the realities of diminishing resources and the challenge of fairly distributing those resources. This involves decisions about war and peace and critical funding to fix rotten education systems, a health care system designed to line the pockets of insurance companies, crumbling infrastructure and a stressed-out environment. It seems to me, these are the really important national security problems.

You groomed yourself for Washington political work with a degree from Georgetown in foreign service. Then it was jobs with the Congressional Budget Office, the Senate Foreign Relations committee advising Joe Biden and a two year stint working for my senator, Pennsylvania’s Bob Casey, as his sole adviser on national security issues. Finally, you got the White House job and were about to be promoted, at age 40, to a job in the Pentagon.

Back in 1980, I made a futile effort to be part of the US foreign service. I had been a kid in Vietnam and had finished graduate journalism school at Temple University. I took and passed the foreign service exam and was invited to Washington for a day-long “assessment.” By that time, it was 1981 and the beginning of the Reagan period, and the interrogators assigned to assess me knew in ten minutes how wrong I was. All I had to do was open my mouth.

I suppose I carry some sour grapes from that encounter, along with my experiences in Vietnam and documentary photography in Central America. All this no doubt influenced me to be a critic of US foreign policy ever since. I’m dead certain our arrogant foreign policy decisions over the past half century have significantly increased the dangers to America we face today. That’s, of course, a radical analysis, one that looks to the past for the roots of today’s problems — rather than the willful historic amnesia we have become so inured to.

Your path seems much more calculated to fit into the Washington power game. But, then, you seem to have had a fatal flaw.

Your career so far suggests to me a man who wants to recognize how things work so he can play the power game well enough to move steadily up the pecking order. As you observe who has the power and who doesn’t and who’s getting ahead, as you are climbing upward, your tweet persona suggests a counter instinct and a sense of disloyalty to those you’re working for. Along the way you seem to have become burdened with a critical impulse and, maybe, even a sense of the absurdity of the merry-go-round you were on.

In this country, we’re all realizing we live under an incredibly rigid regime of secrecy that seems to grow by leaps and bounds every year, our government becoming more and more fearful and paranoid as it realizes the costs of even the smallest revelation. I imagine there is no place on Earth quite as sensitive to candor these days as the White House.

National security state whistleblowers like Bradley/Chelsea Manning and Edward Snowden are being imprisoned or hunted down with unprecedented ruthlessness by a liberal, once anti-war president. At least one major national security reporter is now being threatened with jail time. The sense of US government desperation is palpable. And it’s not only in the United States. With the rise of the internet, governments all over the world hate the journalistic impulse. In Kenya, the government is about to clamp down hard on a relatively free press for broadcasting videos of police and military men looting the wrecked Nairobi mall attacked by terrorists. Here, in the land of the free and the brave, an ex-military Fox News commentator says in the future the US government may have to treat journalists as “enemy combatants.”

Your fatal flaw fits into this scenario. You may be a small time annoyance fired for being too glib on Twitter, but you are, nevertheless, a loose cannon in the midst of a national security state often verging on panic over its perceptions of insecurity. Inter-office gossip is one thing, but you broke the holy membrane and sent out your snarky, critical tweets for all the world to see. You were acting as a leaker/journalist on September 3 when you said, “Will do my best to live Tweet this Syria hearing.” And as a leaker/journalist, you were efficiently hunted down so you could be publicly crucified as a bad example.

Were you a good leaker/journalist? I’ll leave that for you to decide. From the contrite, embarrassed statement attributed to you, I think you probably know the answer to that question. Be glad you’re not in danger of going to jail for your opinionated leaks.

If I were you I would ponder the courageous insider acts of Manning and Snowden and think about what it was they were doing. Yes, they are more extreme cases. But it’s good to ask why so many of us see these American leaker/journalists as true patriotic heroes.

I hope your experience being fired by the White House will in the end be a positive one. You may not really fit in the dog-eat-dog, back-stabbing world of insider Washington power games. A more noble career would be one in which you pursue this urge of yours to publicly express your Truth versus serving their Power.

You could say your Truth has already set you free.

PS: Photo of a Tweet gotcha moment in the annals of cell phone surveillance: