The all-out assault on Social Security has begun.

The set-up for the big battle was the Fiscal Cliff charade. That hyped drama in the last days of December was a moment of truth for the Democratic Party and for President Barack Obama to make it clear whether they were still defenders of the New Deal legacy, or whether they were ready to toss Social Security overboard on behalf of the party’s new constituency: the Wall Street gang.

The president and the Democrats in House and Senate could have said there would be no deal on the artificial Fiscal Cliff that was created by Congress back in August 2011 unless Congressional Republicans agreed not to hold the nation hostage again this February over the issue of raising the national debt ceiling. Republicans were in a weak position, since if the “cliff” deadline were allowed to pass, the Bush tax cuts would have expired. They would have been put in the position of being unable to pass new legislation restoring tax cuts for the wealthy, while Democrats could have forced them to pass tax cuts for those in the middle and lower classes.

Instead of doing that, the president and his vice president, former Senator from the über-corporate headquarters state of Delaware, Joe Biden, offered a “compromise” that give tax breaks to the 1% of Americans who earn between $250,000 and $400,000 a year, protected up to $5 million in estate value from inheritance taxes, and left the GOP free to hold Congress and the Country hostage in February and March when Congress has to pass a new increase in the debt ceiling.

Senate Majority Leader Mitch McConnell (R-KY) has already said that the Republicans in that house will not agree to any tax increases in a debt ceiling deal, and the Republicans who control the House have already made the same thing clear. 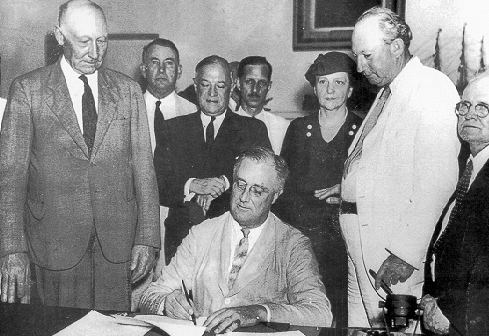 President Roosevelt signs the Social Security Act in 1935, providing retirement security for the next 77 years and beyond

The Republicans have also said that they want significant cuts in “entitlements” (the term that has been successfully attached to both Social Security and Medicare, though actually both programs are earned benefits paid for by workers and their employers over a lifetime of employment). And with the government held hostage in February, and unable to borrow further without a rise in the debt ceiling, Democrats will have an excuse to go along with their demands, claiming that they had “no choice.”

The New York Times on Sunday weighed in with its own artillery in this attack on Social Security, with an article in its Sunday Review opinion section by two academics who claim that the program is facing a “huge cliff” and will run out of money two years sooner than the Social Security Administration has been claiming, which would mean 2031. Technically, of course, Social Security is not going to run out of money even in 2033. It is only expected to exhaust the Trust Fund, leaving current workers’ contributions still funding 75% of benefits, indefinitely. But the authors of this Times scare story fail to mention that point.

No surprise there. The same article also suggested that maybe people shouldn’t be encouraged to retire, since retirement, they claim, leads to shorter life expectancy. Easy to say if you are an academic at a private Ivy League school earning a big six-figure salary to write articles, but not so easy to buy into if you’re a working stiff. They also suggest that maybe there should be lower benefits for those retirees earning more than the lordly sum of $43,000 a year in retirement. Unmentioned in the article’s biographies of the two authors is that one, Samir S. Soneji, is a professor with the Dartmouth Institute for Health Policy and Clinical Practice, a conservative industry-funded “institute” that is dedicated to cutting the cost of health care through “market-based” solutions.

The truth about Social Security is that it is not in crisis. After all, 2033, or even 2031, is a long way off from 2013. Two decades off in fact. What other crisis facing the US can you think of that Congress is preparing for two decades in advance? The answer is none. I can, in fact, think of a real crisis that is two decades off that Congress is blithely ignoring, and that is the global climate crisis. In two decades, if there is no major action to reverse the pace of carbon emissions into the atmosphere, it will be too late to do anything to stop runaway heating of the seas and the atmosphere, which will be a much more serious disaster than exhausting the Social Security Trust Fund! Yet Congress and the president are doing nothing about climate change. Why? Because corporate interests, which only care about making profits over the next quarter or at most the next year, don’t want to be burdened by regulations and taxes designed to force them to reduce their carbon emissions. Those same corporations, and especially the financial interests on Wall Street, happen to want to destroy Social Security in order to force workers to invest in the stock and bond markets that they now thoroughly manipulate, instead of relying on a retirement system that has worked well for over three quarters of a century!

How could Social Security be fixed so that the Trust Fund would not run out? Actually the solution is surprisingly easy. All it would take would be to eliminate the cap on income subject to the FICA tax, which is currently set at $113,000, and to levy a small FICA tax either on investment income (not including retirement savings accounts), or on stock and bond trades that are not held in retirement accounts. In other words, if the wealthy and their employers were required to pay the full FICA tax on all their earned income, and to pay FICA taxes on their so-called “unearned” income, there would be no shortfall at all, right through the retirement years of the Baby Boom generation and beyond.

How on earth is that a “crisis”?

Only because raising those taxes is outside the realm of permissible discussion in Congress, and because the media, like the New York Times in its article, do not discuss it. Okay, the Times authors of the article in question did mention raising the income cap subject to the FICA tax, but they only discuss that option in terms of solving what they said was the shortfall that would lead the Trust Fund to run out two years sooner than already expected. They don’t mention that simply eliminating the cap, as opposed to raising it, together with taxing investment income, would solve the problem of a shortfall in funds completely.

So the battle is on.

The next phase of that battle will be an effort by Wall Street’s handmaidens in Congress and the White House to start trying to split the generations by saying that they will “protect” Social Security for those at or nearing retirement age, while weakening the program (they’ll call it “preserving” the program) for younger workers. This is what is known as divide-and-conquer. It is critical for retirees and near-retirees to resist this cynical tactic and to unite with younger workers to protect benefits for all. If the divide-and-conquer strategy were to succeed, younger workers would immediately start to lose interest in Social Security, and pressure would build among them to start cutting benefits for current retirees, since they would see their own FICA taxes as going to subsidize benefits for the retired that they themselves would never receive.

The only way to protect Social Security is for all workers to be in it together defending the same system of benefits. And the only way to do that is to demand and insist on raising taxes on the rich to support that system.

Make no mistake: the war against Social Security has been launched, and a key battle is coming in February. The broad mass of workers in the US who are depending upon Social Security for their old age or in the event of disability and an inability to work need to unite and engage in that battle now or it will be lost.

Coming next: The War on Medicare