It’s no accident that the New York Police have been so assiduous in their protection of the big banking establishments that are housed on Wall Street and environs.

The banks don’t like paying taxes, but they know how to buy the protection they need, as this page from JPMorgan Chase’s website makes clear.

It boasts that the company has bought the police a bunch of toys for their squad cars, and that is has financed spying software (they call it “security monitoring software”) for the NYPD’s main data center. 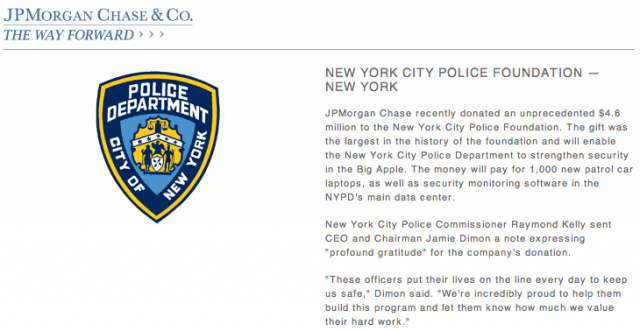 US Hypocrisy Knows No Limits
President Biden's condemnation of Russia at the UN on Wednesday, where he claimed Russia had violated the UN Charter by invading Ukraine, a country he ludicrously insisted posed  "no threat"…
All Dave LIndorff's Posts