A contingent of 20 right-wing veterans with flags and signs declaring their devotion to “our troops,” marched up to the blocked-off Pennsylvania Avenue area in front of the White House. One of the men wore a blue shirt with Army Security Agency printed on it.

“I was in the ASA,” I said to the man, attempting some cordial dialogue. At 19, I had been an Army Security Agency radio direction finder in the mountains west of Pleiku.

The heavy-set man glowered at me and said: “I’m sorry to hear that.” It was as if he were somehow the arbiter of who was, and who wasn’t, a good American, as if he alone gave a damn about “our troops.”

I shot back at him: “So, what the hell does that mean?” He turned away, and I moved on. So much for dialogue.

It was a beautiful, sunny Saturday. By 10 AM a crowd had begun to gather in Lafayette Park across from the White House to hear a host of speakers. By the time Daniel Ellsberg, Ralph Nader and Chris Hedges had spoken, there were 1000 people in the park, many of them veterans. The rally had been called by Veterans For Peace.

A young woman who had served as a nurse in Iraq told the crowd a moving story of water shortages in Iraq and of having to live for days in clothes soaked with a wounded soldier’s blood. Ryan Endicott, a young Marine combat veteran and Winter Soldier spoke emotionally about refusing to re-deploy to Iraq and participate any more in a war he had concluded was immoral. A Vietnam veteran known as Watermelon Slim faced the Obama White House and chastised its resident (who was in Brazil) for assuming, and in cases like drone attacks, escalating the disastrous Bush war agenda.

It was March 19th, the eighth anniversary of the invasion of Iraq and, amazingly, the day the US began its aerial intervention into Libya – our third or fourth war, depending if you count Pakistan as a separate war from Afghanistan. The New York Times reported that the March 19 Libyan attacks were “on a scale not seen since the Iraq War.” It was eerily circular.

By the end of the day, DC park police had arrested 113 people.

As always in this kind of demonstration, the gravity of the issue at hand – the expenditure of human lives and vast amounts of US resources for wars fought as foreigners in faraway places – was at times at odds with the beautiful weather and the cordial, choreographed nature of the demonstration.

After the crowd marched around the block and sidled up against the White House fence, the park police began systematically putting up metal barriers to designate a pre-ordained part of the public sidewalk as an arrest zone. Next, they began shooing people who didn’t want to be arrested across the street back to Lafayette Park. There was some confusion when an officer informed five people by the fence who intending to be arrested that they were in the wrong area, and that if they stayed where they were they would face a different, harsher charge from those in the designated arrest zone.

“Hey, thanks for telling us,” someone said to the cop.

Members of the media had a special zone off to the right. In my case, since I’m a member of Veterans For Peace and consider myself a working journalist, I had to decide where I would make my final stand. For the record, I chose not to stay in the arrest zone, to pass on the media zone, and to remove myself to the people’s zone in the park.

Those choosing to remain by the fence and get arrested had further choices. Once they were cuffed with white plastic straps, they could either walk or be politely dragged on their heels to the buses. Then they had to decide to either pay a $100 fine to the city coffers (all that police weekend overtime costs money) or refuse the fine and be prepared to return to Washington DC for hearings and a trial.

Most protesters were unaware of the grave news unfolding a world away – the beginning of a new war in Libya. They certainly grasped its implications for their future as Americans living in a nation facing a host of neglected domestic problems. And, as came as no surprise to this crowd, elements of the Arab League later expressed shock at the extent and fearsomeness of the US aerial assault. It was a case of Militarism lurching against its civilian leash and dragging the nation into a future of more unanticipated consequences. 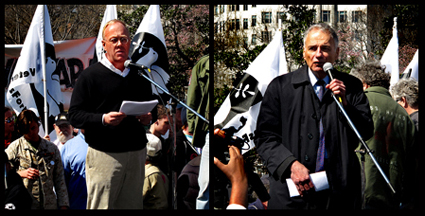 Given such a condition of compounding war, two of the Lafayette Park speeches took on added meaning. Ralph Nader and Chris Hedges each addressed different facets of the peace and anti-war movements. In some ways their approaches were at odds; while in others, they seemed two sides of the same coin.

Nader was up first. Rrumpled as usual in a dark overcoat, he recalled the Vietnam War and how it had finally been brought to a close when Congress cut off the money to run the war. He emphasized the fact US soldiers in places like Afghanistan will always be “foreigners” attacked for that reason. He talked a lot about serious political nuts and bolts. What he drove home over and over was that what we needed to do was get more involved in politics. The military was not going to stop fighting wars until Congress shut off the spigot that funded them.

“We have to dig down deeper into our communities,” he said.

He gave a litany of how we need to learn who our Congress people really are; what makes them tick; who their relatives and friends are; who they spend time with; who their dentists and mechanics are; and to figure out what it is that can make them change their war-friendly habits — how to make them see we are corruptly spending ourselves into a long-term disaster. He also said people needed to sniff out who had money friendly to the anti-war movement and then, to figure out how to use that money to stop the wars — since money made everything happen.

Hedges, a war correspondent with a Harvard divinity degree, had a less pragmatic, more fire-and-brimstone approach. He saw the nation headed for an apocalypse and the necessity for citizens to wake up before it’s too late, to throw themselves into the gears to stop the machine.

Hedges was the next to last speaker before those listening were to decide to get arrested or to avoid the hassle. He ended by talking about the sacred and the forces of life and death, which he sums up in his great book War Is A Force That Gives Us Meaning as the psychological/mythical forces of Eros and Thanatos, respectively the positive, generative life-giving force and the negative, destructive death-wish. The US is now, he argues, locked in a tragic obsession with Thanatos.

“This is my church,” he said of the gathering of veterans. “The battle being fought today is a battle between the forces of light and the forces of darkness.”

He ended by saying: “To be arrested on a March day in front of the White House is an act of reverence.”

How the two distinct approaches to our national obsession with militarism amalgamated in the minds of the many hundreds of listeners in the park is impossible to assess. Certainly, in these numbing times, as Hedges does, there is a huge need to recognize the moral outrage of our too-quick response to problems with F-16 bombers and lethal drones. But, at the same time, so is there a great need for the slow, hard-slogging, less-sexy politicking that Nader spoke of so urgently.

For his part, Daniel Ellsberg, who 40 years ago leaked the Pentagon Papers, focused on Bradley Manning, the young PFC Ellsberg has taken on as a moral protege. Manning allegedly passed secret material to WikiLeaks which released it to newspapers like the New York Times. He is being held in undignified conditions involving a humiliating stripping regimen at Quantico Marine Brig in Virginia. As discussed here earlier, this kind of procedure amounts to what is called “slow torture,” which is used to break down resistance and destroy a person’s mind over time.

Following his arrest with the other 112, Ellsberg led a rally in support of Manning the next day outside Quantico. Such public recognition of Manning’s plight is intended to protect him from further US military abuse before he is brought to trial. Manning has been charged with “aiding the enemy.”

Material from the cable traffic Manning allegedly leaked now appears on a regular basis as background information in newspapers like the New York Times. Given that the Times is considered the paper of record of the United States of America, the idea that releasing material to such a newspaper amounts to “aiding the enemy” is interesting. It seems to suggest the secrecy-obsessed Pentagon sees a better-informed American citizenry as “the enemy.”

If that is the real issue behind the Manning case, it’s easy to see why the war-addicted Pentagon and US government want to play havoc with young Bradley Manning’s mind before he can be brought to trial.