It’s amazing to watch how shallow and self-censoring our corporate media can be. Take the remarkable interchange between President Donald Trump and Fox right-wing talkshow host Bill O’Reilly. In an interview that aired before the Super Bowl, Trump had responded to O’Reilly’s question about how he could respect Russian President Putin, whom O’Reilly called “a killer,” by saying, “There are a lot of killers. We’ve got a lot of killers. What do you think — our country’s so innocent? You think our country’s so innocent?”

Most news organizations reporting on this included the response of Senator Mitch McConnell (R-KY) to Trump’s comment, in which the Senate Majority Leader said, “Putin’s a former KGB agent. He’s a thug. “

Left unsaid was the fact that this country also once had a former intelligence agency “thug” as its president: George H.W. Bush. Bush was named CIA director in 1976 by then President Gerald Ford, and during one-year tenure as head of the Agency, he reportedly worked assiduously to protect it from post-Watergate investigations and reforms of its past dirty behavior by shipping agency operatives abroad and out of reach of investigators. Furthermore, as investigative reporter Russ Baker, author of a book on Bush called Family of Secrets, reports, Bush’s connection to the CIA, kept secret for years, stretches way back to the days of its precursor agency, the OSS, and lasts at least through 1963 and the Kennedy assassination. 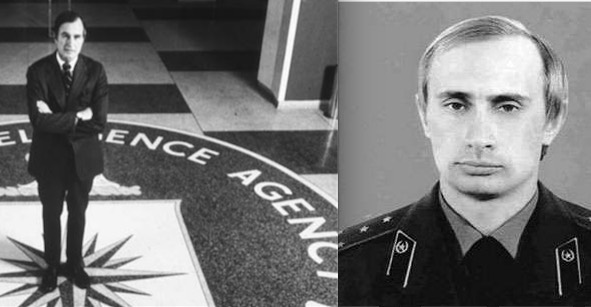 It was during Bush’s tenure as CIA director that agents of Chile’s intelligence service, the DINA, planted a bomb in the car of former Chilean foreign minister Orlando Letelier, then living and working in exile in Washington, DC. The bomb killed Letelier and an American assistant, Ronnie Moffet. DINA was very closely coordinated with the CIA, which had orchestrated the 1973 military coup that overthrew the elected Socialist government and murdered Chilean President Salvador Allende, for whom Letelier had worked, later becoming a chief critic of the subsequent military dictatorship. At a minimum, Bush’s CIA appears to have known about the plot to kill Letelier, and he subsequently worked to cover up any links to either DINA or the CIA. Bush’s CIA also helped coordinate a continent-side Murder Inc. project against leftists in Latin America called Operation Condor.

In any event one could even more properly refer to President Obama as a thug, courtesy not of any nefarious background as a former CIA operative, but in his role as murderer-in-chief with his Tuesday morning “kill list” sessions, where he would decide whom to target next for a drone attack. According to the Bureau of Investigative Journalism, during his eight years in office, President Obama ordered 563 strikes at specific alleged terrorist targets. While it is unclear how many of those actual targets were successfully killed (many are known to have escaped), the BIJ claims that by its count between 384 and 807 civilians, including children, were also killed in the attacks. Other sources say the number of those “collateral damage” killings is actually considerably higher.

The charge is often made that several dozen Russian journalists critical of Putin and the Kremlin have died under mysterious circumstances, some by outright execution-style murders, which Putin critics then assert could not have happened without Putin’s authorization. But there have been no clear links in any of these to Putin.

Meanwhile, there have also been a number of suspicious deaths of American journalists critical of the government and its leaders over the years (including some of the deaths of US and foreign war correspondents covering US wars over the years from at least Vietnam onward — and some near misses or serious threats, as for instance when several reporters in a small private boat were threatened with being blown up by a US Navy destroyer if they kept heading for Grenada during the 1983 US invasion of that island nation). Take for example journalist George Polk, a CBS News reporter murdered while covering the Greek civil war in 1948, in a case that many suspect was actually the work of the CIA, which suspiciously “lost” and “destroyed” its records relating to Polk.

More recently, of course, there is the bizarre and troubling death of Michael Hastings, a reporter for BuzzFeed and Rolling Stone who was killed in a high-speed crash of his new Mercedes C250 coup, which had reportedly been observed driving an estimated 100 mph done a local Los Angeles street in the middle of the night in 2013 before veering off into a palm tree and exploding into flame. Hastings had reportedly been working on an article on the Democratic party, the NSA and the CIA at the time of his death, and had told associates he needed to “get off the radar for a bit” because federal agents were interviewing his associates. His death followed his publication in 2010 in Rolling Stone of a lengthy article on the top commander in Afghanistan, Gen. William McCrystal, whose on-the-record criticisms to him of President Obama led to the general’s resignation. McCrystal had earlier led the US military’s assassination program in Iraq, which like the CIA’s notorious Phoenix Program of assassinations of Viet Cong leaders had attempted to kill off the leaders of Iraq’s Sunni counterintersurgency. Around the time of Hasting’s death it became known that such new cars as his Mercedes were vulnerable to hacking which would allow someone with a computer to wrest full control of all functions of a car — the accelerator, the steering and the breaks — from the driver and to cause crashes like the one that killed Hastings. The secretive manner in which Hastings’ body was handled by the county coroner, and the way his car was removed by police under a white shrink wrap, has only deepened suspicions about the real cause of his death.

Consider too the strange murder of Seth Rich, the 27-year-old Democratic National Committee computer worker who Wikileaks has suggested was the source of leaked DNC emails late in last year’s election campaign — leaks which many believe contributed to Hillary Clinton’s defeat on Nov. 8 by Donald Trump. Rich was shot twice in the back while walking home at night in Washington, DC on July 10, 2016 in what local police quickly termed a “botched robbery,” though his killer, never found, reportedly made no attempt to take a watch, phone or wallet. Wikileaks, which released the emails, has offered a $25,000 reward for information leading to the arrest of Rich’s killer.

Recall also the responses of some prominent polliticians and current and retired intelligence officials to both whistleblower and media source Edward Snowden’s NSA document release and Wikileak’s Julian Assange, both of whom were the threatened with calls for their assassination. Among those calling for Snowden to be killed was Donald Trump in 2013, Trump’s choice to be CIA Director Michael Pompeo and former NSA Director Michael Hayden, who offered to help put Snowden on the White House “kill list.” As for journalist Assange, Bob Beckel, a Democratic strategist with the Clinton campaign, following Wikileaks’ publication of the DNC emails and other Clinton emails, called for his assassination. Hillary Clinton herself, at some point in a discussion of legal and “non-legal” methods of silencing Wikileaks, is reported to have asked, possibly in jest, “Can’t we just drone this guy?”. Clinton at that point was still the expected winner of of the presidential race.

While, as in the case of Russian killings of journalists, links to leaders are purely speculative in cases of journalist killings in the US, the same kinds of inferences often made about Putin’s possible role are all too easy to make about leaders roles when it comes to the murder of journalists and their sources here in the US, too.

The US mainstream media just don’t make those inferences, except when it involves killings in Russia.