London -– Neither overcast sky nor small crowd dampened the passion Duale Yusuf displayed as he denounced the destructive U.S. foreign policy in Somalia during a protest recently outside the American Embassy in this city’s posh Mayfair section.

“There is a Guantanamo Bay prison in Mogadishu where thousands of Somalis are being tortured. American drones are killing people in Somalia. We don’t need drones, we need peace, like in America and Britain,” said Yusuf, criticizing the latest upsurge in American military activity in his homeland in the Horn of Africa.

A few days before that London protest some American news outlets carried a report detailing increased U.S. military activities across the African continent supposedly designed to “fight militants” with measure that include supplying equipment, providing intelligence and expending “tens of millions of dollars.”

That report referenced $45-million in military equipment sent to Uganda and Burundi to support their forces in Somalia plus $24-million to Kenya, which invaded southern Somalia days before the protest.

Kenyan officials said their incursion into Somalia is to end murderous cross-border raids by the Al-Shabaab militia, an organization in Somalia that U.S. officials’ link to al Qaeda.

Yusuf, a member of the Somalia Youth Congress, expressed particular disappointment during his protest remarks with U.S. President Barack Obama for bringing more bombs than books to Africa, breaking promises to Africans that he would institute constructive rather than destructive policies. 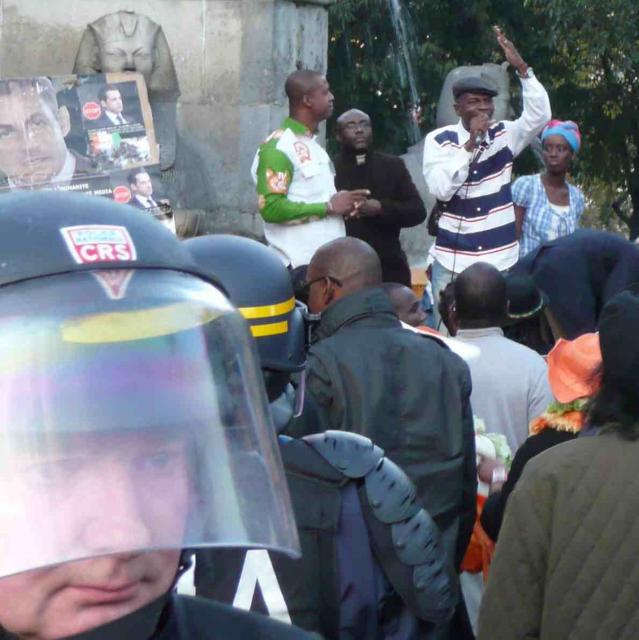 “We tell Obama to remove the CIA from Mogadishu where they are torturing people. We are not terrorists in Somalia. We want schools, and hospitals like in the U.S. and Britain,” Yusuf said about his homeland wrecked by twenty years of civil war following the overthrow of an American-aligned dictator in 1991.

American military activities on the African continent have escalated steadily under the Obama Administrator, which has authorized assaults against terrorists suspected of links to al Qaeda, enlarged the U.S. military command in Africa (AFRICOM) and joined the British and the French in overthrowing Libyan strongman Muammar Gaddafi this year.

President Obama, weeks ago, announced the dispatch of 100 combat troops into central Africa to assist nations there in combating the renegade Lord’s Resistance Army which Human Rights Watch and other organizations say are responsible for a long reign of widespread atrocities including murders, rapes and kidnappings.

Obama stated in a letter to a top congressional leader that dispatching those troops furthers “U.S. national security interests and foreign policy.”

This escalation of American military activity in Africa triggered an escalation of criticism, as many Africans and others see this activity as a projection of Western imperialism directed toward securing tighter dominance over Africa’s vast mineral wealth, not as an effort to promote democracy, as proclaimed by the US and its allies.

“Africa is the new battle ground in a war over resources between the West and China,” a member of the African Peoples Socialist Party said during the protest, as attendees chanted slogans like “Obama’s wars – war crimes!”
Many critics of current U.S. African policy cite alarming gaps between U.S. rhetoric and the realities of US policy.

President Obama justified America’s billion-dollar-plus involvement in the assault on oil-rich Libya on humanitarian grounds, saying that bombing was aimed at preventing Gaddafi from massacring his opponents.

Yet the Libyan rebels backed by Obama and NATO – including some rebel leaders with long-standing al Qaeda links – have themselves engaged in a horrific racist massacring of black Libyans and African migrant workers in that country, all without strong condemnation from the White House, which has made no effort to end those atrocities.

“Yesterday it was slavery, then colonialism and now the dictators Obama, [British Prime Minister David] Cameroon and [French President Nicolas] Sarkozy are attempting to colonize Africa with again,” said Made’ Gueu during that American Embassy protest.

Gueu is a member of an organization opposed to the French removal this year of the elected president of the Ivory Coast in West Africa, a move backed by the Obama Administration. That removal remains controversial, and has been prompting protests weekly in Paris, said Gueu.

Affiong L. Affiong, a Nigerian-born activist once imprisoned in her homeland for opposing human rights violations, feels President Obama (whose father was Kenyan) has not been good for Africa.

“I think Obama is the classic case of neo-colonialism,” said Affiong, during a recent interview in London. She is co-founder of the Moyo wa Taifa Pan Afrikan Women’s Solidarity Network. She splits her work life between London and Ghana.

Affiong’s opinion about Obama policy is a sentiment also expressed recently in an article co-authored by Bill Fletcher, the immediate past president of the Afro-American lobbying/policy group Trans Africa Forum.

Fletcher wrote: “…there is something very wrong in Obama’s foreign policy.” He points to U.S. military aggression in regions ranging from Africa to Afghanistan and beyond.

Fletcher’s article is particularly critical of the lack of “outcry” from black Americans about Obama Administration foreign policy, noting that historically blacks “regularly criticize and openly oppose interventionist activities by the USA…”

Fletcher blames this “relative silence” on the paralysis stalking the African-American body politic stemming from a misplaced belief that criticizing Obama is “somehow disloyal.”

The Coalition Against Foreign Military Intervention In Africa, a group Alliong works with, criticizes Africa’s leaders and the African Union for failing to “represent the people of Africa” against the resurgent imperialistic efforts by America, Britain, France and other industrialized nations to control Africa’s resources.

To date, the performance of most African leaders has been nothing less than shameful,” stated a Coalition position paper, noting the “indisputable” track record of European/American alliances in “staging coups, committing assassinations, decimating economies, all with the intention of gaining control of African resources and its people.”

Activist Made’ Gueu condemns constant French intervention in the Ivory Coast for the May 2011 installation of Assane Ouattara as president. Ouattara, is the French-backed rebel leader who once worked as a International Monetary Fund economist.

This elevation of Ouattara is a prime example of Europeans subverting democracy in Africa, argues activist Made’ Gueu.

“President Gbagbo asked for a recount in the election, but France, the U.S. and the UN blocked a recount,” said Gueu, explaining that actions of Gbagbo’s international opponents violated election laws of the Ivory Coast.

“If there were problems with the election, then have a recount like there was in Florida and other places in the US. But Obama gets on TV saying President Gbagbo needs to go. Obama did not do the just thing.”

Gueu sees a direct connection between Gbagbo’s removal and that leader’s efforts to end French companies having monopolistic control over the Ivory Coast’s economy. Gbagbo also sought greater revenues for the Ivory Coast from its major export – cocoa used to make chocolate. (In its day Ivory Coast nation was the top revenue-producing French colony in Africa.)

“The issue is about money and who controls it. Plus, oil has been discovered in the Ivory Coast,” said Gueu during an interview. “The West and its media painted Gbagbo as a dictator but Gbagbo was no dictator. He barred the jailing of journalists. Dictators do not do that.”

America’s mainstream news media and many progressive media sources dismissed Inhofe’s charges of vote fraud, characterizing him as blinded by his connection with Gbagbo through the two men’s shared Christian fundamentalist beliefs.

Award-winning independent journalist George Curry, who traveled to the Ivory Coast earlier this year, criticized “one-side reporting” that failed to mirror the realities he “witnessed on the ground” during his visit.

Curry, an African-American, wrote that France and the U.S. “can’t intervene in every country that elects a leader it opposes…Regardless of which side one favors, Ivorians followed their constitution in choosing Gbagbo over his challenger…”

Activist Made’ Gueu said, “One reason why the world is suffering today is the evil of the very few…Democracy is not a luxury for Africa, as Sarkozy once said.”