The US stock market jumped up today on word that the number of new unemployment applications fell to the lowest level in four years.

Sounds good, right? It’s meant to sound good, but if you look at the number, and if you think about what it really means, it’s not good news at all.

What the US Labor Department reported was that new unemployment claims filed for the week ended Feb. 24 totaled 351,000, which was slightly lower than the 353,000 new claims filed the prior week. “Slightly” indeed! A better term for this 0.57% decline is “statistically insignificant!

The idea that such a “drop” in new claims would spark a jump in the Dow or the S&P shows how completely divorced from reality investors–and the reporters in the corporate media who trumpet these kinds of things–really are.

But it is worse than that. The number, remember, is new unemployment claims. That is to say, over a third of a million more Americans, all of them previously working, were laid off last week. Anyone who sees that as some kind of good news is really stretching to find a silver lining on a pretty dark cloud.

Happy talk on the economy is just talk when nearly 30 million are jobless and most others are struggling.

Now I’ll grant you that from one perspective it’s good to see “only” 351,000 new people joining the nation’s already long unemployment lines rather than the 589,000 who joined a line in December 2008. But the reason the number is smaller now is not that things have been getting better. It’s that there are fewer people to lay off. Companies and employers have already cut back their workforces to the bone, so for them to find another 351,000 people to sack, as they seem to be doing week after week, suggests they are really struggling.

The official unemployment rate, an artificial politically rigged number deliberately designed to underreport the amount of actual joblessness, is still at a staggering 8.3 percent of the workforce, which represents over 13 million people. And if you count, as the government used to do, those who have been forced to accept only part-time jobs when they want full-time work, and those who have given up actively looking for work not because they don’t want a job but because they have realized that there are no jobs to be had where they live, the rate is over 15%, and nearly half of those people without jobs have been without one for more than 6 months. Many people have exhausted their unemployment benefits, which after extensions, have been running as long as 99 weeks, or nearly two years! In fact, if you add in the long-term unemployed (those who had given up looking for work for more than six months) who used to be counted bur who, by an edict from the DOL’s Bureau of Labor Statistics were defined out of existence in 1994, the current unemployment rate is 22%. And the rate has been stalled at that level for several years now, showing no signs of dropping and actually rising slightly. To see this graphically illustrated, check out the website Shadowstats. 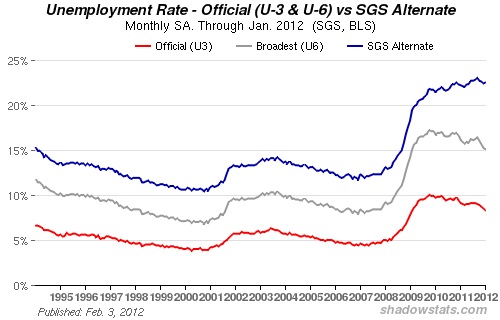 Using methodology that was in place until 1994, the US jobless rate is 22%, and has been rising (courtesy Shadow Stats)

By the way, the same day that the Labor Department reported that 351,000 new unemployment claims had been opened in a week, it was reported that in January US employers added a net 243,000 new jobs. That was in a month! But new unemployment claims in February were running at above 350,000 every week for a month following that net increase in jobs.

How you get from there to seeing 351,000 new unemployment claim filings last week as good news is simply beyond me. How you can have a president looking at these numbers say, as President Obama did in his State of the Union address, that “America is back,” is beyond me too.

One way is to trumpet a decline in the size of new unemployment claim filings as a positive. Another is to point to the stock market hitting a new high, when obviously corporate profits have become almost completely untethered from the state of the national economy, and in any case have been achieved precisely by laying off record numbers of American workers and shipping millions of jobs overseas to low-wage countries, while making those workers in the US who still have jobs work harder and longer for the same or lower wages. And a third is to count on ignorant or lazy journalists and editors of the corporate media to follow the lead of the happy talk folks in the White House and the Labor and Commerce Departments and paint bad news as good.

So don’t be suckered by these numbers. The US economy is in the same swamp that it has been in for the past four years, and the American people are still being screwed by a system that is all about shifting wealth from the bottom and the middle up the top 1%.