A little over a month ago, back on March 19, at 3:00 in the morning, the Limerick Nuclear Power Station, which runs two aging GE nuclear reactors along the Schuylkill River west of Philadelphia, had an accident. As much as 15,000 gallons of reactor water contaminated with five times the official safe limit of radioactive Tritium as well as an unknown amount of other dangerous isotopes from the reactor’s fission process blew off a manhole cover and ran out of a large pipe, flowing into a streambed and on into the river from which Philadelphia and a number of smaller towns draw their municipal water supplies.

No public announcement of this spill was made at the time, so the public in those communities had no idea that it had occurred, and water system operators had no opportunity to shut down their intakes from the river. There was no report about the spill in Philadelphia’s two daily newspapers or on local news programs.

Only weeks later, after the regional office of the Nuclear Regulatory Commission was finally sent an official report by Exelon, the owner of the plant, did a public notice get posted on the NRC’s website, after which some excellent reporting on the incident was done by Evan Brandt, a reporter for a local paper called The Pottstown Mercury.

ThisCantBeHappening! contacted the NRC regional office with oversight over Limerick and was told that Exelon had only reported the incident to state authorities — the Department of Environmental Protection (DEP) and the Pennsylvania Emergency Management Agency (PEMA). A call to the DEP elicited a response that the state agency, now in the hands of a Republican governor who has shown open distain for environmental concerns ranging from nuclear waste to regulation of natural gas fracking chemicals, that it did not feel it was necessary to issue any public report on the spill. “Exelon assured us that it was not an EPPI incident,” explained DEP regional office spokeswoman Deborah Fries.

“What’s an EPPI?” she was asked. “It’s an Event of Potential Public Interest,” Fries replied. 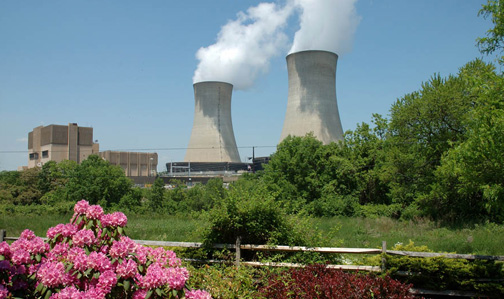 The Limerick nuclear reactors just outside Philadelphia are the same design as those at Fukushima, all built by GE

In other words, Exelon and the state’s DEP and PEMA officials, meeting behind closed doors, agreed that the spilling of up to 15,000 gallons of radioactive isotope-laced reactor water into a river that supplies drinking water to hundreds of thousands of people was not an event of “potential public interest,” and so they didn’t make it public, thus insuring that it would not become a matter of public interest, or even of public knowledge! The logic is impeccable, though the NRC subsequently protested that Exelon should have reported the incident to the commission, which would automatically have posted it on its website as public notice of a spill.

But it gets worse. Mercury reporter Brandt discovered that one reason Exelon was able to claim initially that the spill of reactor water into the river was no big deal, and to avoid publicly announcing it, was that it was a “permitted discharge.” Even the NRC report on the incident, when it was finally posted three weeks late, said that the spill had merely been waste water that had “overflowed during a scheduled and permitted radiological release.”

The idea that the Limerick nuclear generating plant is “routinely discharging” nuclear waste into the Schuylkill River and that this is permitted by the NRC, and that by extension this is being done by all the nuclear generating plants across the nation, will no doubt come as a big surprise to most Americans, including those who live downstream and downwind of these plants (because it turns out that there are also permitted regular releases of radioactive gas by these other facilities). But that’s the truth.

As Neil Sheehan, a spokesman for the NRC’s Southeast Pennsylvania Regional Office, explains, “Periodically, to clean their cooling tower water pipes, the operator will have a ‘blow-down’ where they pump a lot of clean water through the system to push out collected sediment. When they do that, whey are allowed to add some reactor water to it. This is an acceptable method, well within federal safety levels” for radio isotopes. Sheehan explained that while the concentration of Tritium and other radioactive elements in the 15,000-gallon reactor waste-water tank would have exceeded federal safety levels for release into the environment, by first diluting it with all the water being used for the cooling tower “blowdown” process, and then dumping the resulting water into the large river, it would all be diluted to below federal safety levels.

“It’s nothing we would try to disguise,” said Sheehan.

Maybe, but then why was this dumping process being done by Exelon at the peculiar time of 3 a.m., and why was Exelon so anxious to avoid having to report it?

Lewis Cuthbert, a retired schools superintendent who lives with his wife Donna in the shadow of the Limerick cooling towers, has been a critic of the plant and its owners for 15 years. He says, “I don’t believe the NRC or Exelon have ever before said that the plant ‘routinely’ releases nuclear waste into the environment.”

Cuthbert suggests such releases might help explain why the incidence of childhood cancers around the vicinity of the Limerick plant are “92% higher than normal” according to research he and Donna Cuthbert have done.

Coincidentally or not, the Philadelphia Water Department announced that on April 4, traces of the radioisotope Iodine 131, a short-lived alpha-emitter produced as a fission byproduct in nuclear reactors, had been found in the city’s water supply. Though the Queen Lane Reservoir where the I-131 contamination was found draws its water from the nearby Schuylkill River, no mention was made of the Limerick Generating Station as a possible source of the contamination. Instead, the two possible sources suggested were the Fukushima accident in Japan, and medical facilities in the region that use I-131 for medical tests (though in the later instance, such materials would end up in the sewer system, not the water system!). At the time of the finding, the PWD would not even have known that Limerick had had a spill in the Schuylkill only days earlier, much less that the nuke plant has been routinely releasing reactor wastewater into the river for years.

Meanwhile, Exelon is working hard to play down the issue of its dumping of contaminated reactor water into the heavily populated Philadelphia area’s waterways and air. “Limerick Generating Station’s procedures and guidelines allow for water releases to be performed routinely within strict state and federal environmental guidelines and oversight,” said Limerick Plant spokeswoman Dana Melia. “During a release, mildly radioactive water is pre-mixed with hundreds of thousands of gallons of non-radioactive water from Limerick’s cooling towers before it is pumped through a network of pipes to the Schuylkill River. Radiation and flow monitoring at the river’s edge ensure that all releases are performed in accordance with the station’s water use permit and that no releases exceed stringent radiological or environmental limits.” She added, “It is important to point out that most of the limited amount of spilled water ended up where it was originally intended to go – in the river.  The rest evaporated.” (Well, not really. Some water, and the Tritium atoms in the water molecules, may evaporate, but elements like radioactive Iodine, Cesium, Potassium, Strontium or Cobalt do not.)

She claimed that Exelon regularly monitors radiation levels around the plant to assure that there are no hazardous levels of radioactivity, but there is reason to doubt that those measurements are reliable. On April 23, an article in Global Security Newswire reported that an April 19 internal audit of the federal Environmental Protection Agency’s national radiation monitoring network had found many of the EPA’s 124 monitoring stations to be either broken or in such poor maintenance that they were not working over the past year. The audit found that one in five of the monitors were broken, and that 50% of those sampled that were functioning had not had their filters changed in at least 130 days, making them ineffective. EPA policy, the auditor noted, calls for filter replacement twice a week.

Exelon, the EPA and other agencies, including Philly’s water company also routinely downgrade the risks of isotope releases and contamination of air and ground water by conflating beta radiation of the type detected by geiger counters with the presence of alpha-particle-emitting isotopes. The truth is that there is really no “safe level” of something like radioactive Iodine, Cobalt, Cesium or Strontium. Such chemicals tend to gravitate to certain organs in the body, where they sit and irradiate surrounding tissue with large, relatively slow-moving alpha particles which can eventually cause cancer in those cells.

Word that plants like Limerick (which features the exact same flawed GE plant design as the exploded, melted-down reactors in Fukushima), are “routinely” releasing wastes into the environment could complicate plans by Exelon and other operators to avoid having to decommission their aging facilities, and to receive 20-year license renewals to continue operating them.