When Donald Trump announced his bid for the Republican presidential nomination in June 2015 he unleashed a tirade against illegal immigrants from Mexico, libeling most of those immigrants as criminals and “rapists.”

Given Trump’s alleged concern about rapists running rampant and his silence on a California state court judge’s recent issuance of an insulting six-month sentence to a violent rapist, Trump’s unprecedented onslaught against rulings by a federal judge in California of Mexican-American ancestry is especially troubling.

Perhaps Trump’s silence on the wrist-slap sentence for that violent rapist revolves around the fact that this rapist is not one of those Mexican immigrants that Trump rails against for committing crimes.

Rather, that convicted rapist is a young white male whose crime occurred while he attended Stanford, a top-rated private university, on an athletic scholarship. The judge in that rape case is also a white male and an alumnus of the same prestigious university.

The victim of that violent rapist is a woman and Trump has oozed a litany of offensive remarks about women during the campaign that has made him the Republican Party’s presumptive presidential candidate. Trump did speak out on behalf on a woman killed during a 2015 crime but that killer was an a different story. The killer was an illegal immigrant from Mexico. 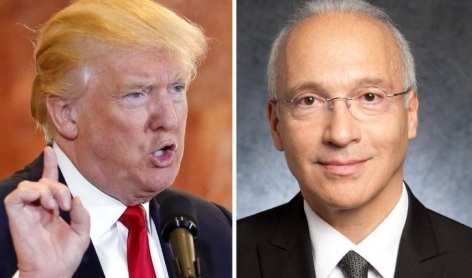 Trump doesn’t like native-born Mexican-American Judge Gonzalo Curiel’s procedural rulings in a case against him, so he declares him racially biased

Trump denies that bigotry motivates his assault on that Mexican-American federal judge while he seamlessly declares that judge’s “unfair” rulings against him are motivated by that judge’s allegedly race-based retaliation against Trump.

Trump claims that Judge Curiel’s ancestry — he was born in the US to Mexican immigrant parents — automatically makes him an opponent of Trump’s signature proposal to build a wall between Mexico and the United States to blunt illegal immigration.

Trump’s unsubstantiated onslaught against Curiel is reminiscent of the ancestry-obsessed attacks directed against Reynaldo Garza, the distinguish Texas lawyer of Mexican-American heritage appointed to the federal bench in 1961 by President John F. Kennedy.

Garza was the only federal judge of Hispanic origin on the entire federal court bench for nearly twenty-years until 1979 when President Jimmy Carter appointed additional federal judges of Hispanic ancestry.

Opponents of Garza, who served on both federal district and appellate courts, scrutinized his “actions and sought fodder to justify their discriminatory beliefs,” Professor Guerra noted in that article.

Typical of Trump’s fact-free verbal assault style, his accusations against Curiel lack specific documentation of bias beyond Trump’s unsubstantiated rant that Curiel’s rulings against Trump in court must be retaliation. Judge Curiel, born in Indiana to parents born in Mexico, first became a judge, in state court, through appointment by a Republican governor. Obama nominated Curiel to the federal bench and Curiel’s confirmation by the U.S. Senate occurred without dispute from that body’s Republican Party majority.

Further, Trump’s accusations against Curiel sidestep the fact that this jurist began presiding over the Trump University fraud case long before Trump even announced his presidential bid in June 2015 with a promise to build that wall and have “Mexico pay for it.”

Federal law provides Trump with remedies if he thinks Judge Curiel is biased -– remedies that do not require the use of nakedly racist accusations.

However, those legal remedies require that Trump provide solid proof of personal bias by the judge, not just unsubstantiated rants about alleged wrongdoing.

“A judge cannot be disqualified merely because he believes in upholding the law,” a federal appeals court stated in a 1949 ruling against South Carolina officials then trying to block blacks from voting.

Black judges, like other racial minorities in the judiciary, have longed endured assaults that questioned their competence and their fairness, and particularly their impartiality in race-discrimination cases.

An attack on the impartiality of Federal Judge A. Leon Higginbotham in the early 1970s during a case involving discriminatory hiring practices of a building trades union produced a blistering reply from legendary legal scholar Higginbotham that is now included in many law school textbooks.

Higginbotham, in a writing ruling rejecting that union’s claims against him, stated just because “one is black does not mean, ipso factor, that he is anti-white; no more that being Jewish implies being anti-Catholic, or being Catholic implies being anti-Protestant.”

Raising a reality dismissed by many, Higginbotham, then a federal district court judge, stated, “If blacks could accept the fact of their manifest absence from the federal judicial process for almost two centuries, the plain truth is that white litigants are now going to have to accept the new day where the judiciary will not be entirely white and where some black judges will adjudicate cases involving race relations.”

Explicit in Donald Trump’s rants against Judge Curiel is the assertion that Mexican-Americans harbor hatred against Trump simply because of his proposal to build a wall. That assertion is as inaccurate as Trump proclaiming that all blacks oppose police brutality.

Trump surrogate Darrell Scott is not an outspoken opponent of police brutality like other prominent black pastors in Cleveland, Ohio where Scott, an African-American, leads a mega-church.

Scott, for example, was virtually silent on the fatal shooting of 12-year-old Tamir Rice by a policeman in Cleveland, a homicide that elicited outrage nationwide when a video revealed that the officer had shot the child within two seconds of arriving on the scene in his squad car, making no effort to talk the child into putting down what turned out to be a toy gun.

Scott, like Trump, is an opponent of Black Lives Matter, a movement organized a few years ago that opposes abusive policing against blacks.

US Hypocrisy Knows No Limits
President Biden's condemnation of Russia at the UN on Wednesday, where he claimed Russia had violated the UN Charter by invading Ukraine, a country he ludicrously posed "no threat" to…
All Dave LIndorff's Posts