ThisCantBeHappening! has just learned that the TCBH! Collective has won its sixth Project Censored Award in as many years since the news site was established in June 2010.

This year’s award, for the “second most important unreported news story of the 2016-17 year,” is for a piece run on August 17, 2016 authored by Dave Lindorff headlined: Not just $600 toilet lids or unusable F-35s: The Pentagon Money Pit: $6.5 Trillion in Unaccountable Army Spending, and No DOD Audit for the Past Two Decades 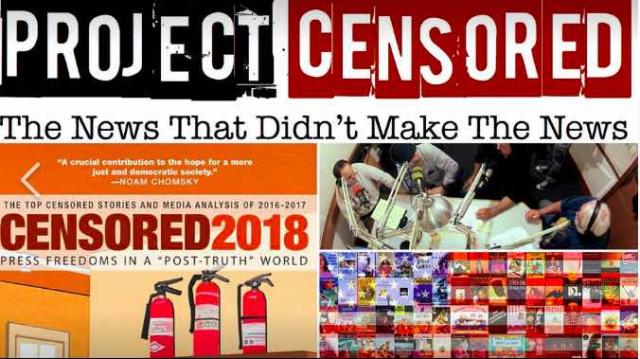 As Project Censored, the organization that issues these awards each year, puts it in describing the story:

According to a July 2016 report by the Department of Defense’s Office of Inspector General (DoDIG), over the past two decades the US Army has accumulated $6.5 trillion in expenditures that cannot be accounted for, because two government offices—the Office of the Assistant Secretary of the Army and the DoD’s Defense Finance and Accounting Service—“did not prioritize correcting the system deficiencies that caused errors . . . and did not provide sufficient guidance for supporting system-generated adjustments.” In the bureaucratic language of the report, the expenditures themselves are referred to as “unsupported adjustments” and the lack of complete and accurate records of them are described as “material weakness.” In other words, as Dave Lindorff reported, the DoD “has not been tracking or recording or auditing all of the taxpayer money allocated by Congress—what it was spent on, how well it was spent, or where the money actually ended up.”

In 1996, Congress enacted legislation that required all government agencies—including not only the Department of Defense but also the federal government’s departments of education, veterans affairs, and housing and urban development, for instance—to undergo annual audits. As Thomas Hedges reported for the Guardian in March 2017, “the Pentagon has exempted itself without consequence for 20 years now, telling the Government Accountability Office (GAO) that collecting and organizing the required information for a full audit is too costly and time-consuming.” (For Project Censored’s previous coverage of the Pentagon’s “inauditable” budget, see “Pentagon Awash in Money Despite Serious Audit Problems,” Censored 2015, pp. 59–60.)

As Lindorff wrote, in fiscal year 2015 total federal discretionary spending—which includes everything from education, to housing and community development, to Medicare and other health programs—amounted to just over $1.1 trillion, and the $6.5 trillion in unaccountable Army expenditures represents approximately fifteen years’ worth of military spending.

The DoD Inspector General issued its report at a time when, in Lindorff’s words, “politicians of both major political parties are demanding accountability for every penny spent on welfare,” and they have also been engaged in pervasive efforts “to make teachers accountable for student ‘performance.’” Yet, he observed, “the military doesn’t have to account for any of its trillions of dollars of spending . . . even though Congress fully a generation ago passed a law requiring such accountability.”

Mandy Smithberger, director of the Strauss Military Reform Project at the Project on Government Oversight, told Lindorff, “Accounting at the Department of Defense is a disaster, but nobody is screaming about it because you have a lot of people in Congress who believe in more military spending, so they don’t really challenge military spending.”…

Also honored for reporting on the same issue was FAIR.org, where Lindorff also contributed an article, focused on how the mainstream media has for years avoided reporting on this major scandal, with a Sept. 2, 2016 article headlined: Ignoring the Pentagon’s Multi-Trillion-Dollar Accounting Error, and Thomas Hedges of the UK Guardian newspaper, whose March 20, 2017 article reported on the Pentagon’s stonewalling of repeated Congressional demands that it produce auditable accounts of its spending: The Pentagon has never been audited. That’s astonishing.

While we in the ThisCantBeHappening! collective take pride in the fact that this news site, with a budget of just a few hundred dollars a year and volunteer labor by the journalists of the collective has been winning all these awards for diligent reporting that the much better-funded corporate media just don’t do, we also want to take this moment to remind our readers that we could do so much more if your would all also take the time to go to the Paypal button in the upper right corner of this page and make a small contribution to our work. That way, we could actually afford to take time away from our day jobs and do the kind of digging that’s really required to cover the stories that aren’t getting reported on more often.