Having spent the better part of two months as an embedded reporter with Occupy OKC’s camp in Kerr Park (aka Poet’s Park) I have often praised both the city and police department. Oklahoma City’s occupation has so far managed to avoid the mass arrests and police brutality seen in other cities around the nation. In my opinion, this is largely due to the group’s respect for the park and city ordinances, as well as the city’s respect for the First Amendment. I frequently pointed to OKC as a model city, setting an example for how a local government and occupiers can peacefully coexist.

So imagine my surprise upon learning that the City of Oklahoma City recently refused to accept the group’s $55/day permit fee. Assistant City Manager M.T. Berry told Occupy OKC that not only were they being evicted from Poet’s Park, all city parks would be closed to them. Protesters were further informed that anyone remaining in Poet’s Park after curfew would face citation or arrest, effective immediately.

6:40 p.m. – an emergency General Assembly is called to decide whether to leave the park voluntarily or standoff with police. Occupier Jay Vehige speaks first:

Jay: “I’ve been arrested twice already and I’ll do it again if I know people are with me. I’m not afraid!”

Jay: “Clearly (crowd repeats) They’ve lied to us before. I bet the police officers are suiting up for battle right now. So let’s be real. The time has come for us to make our stand. Will we cower? In the corner? Or will we stand against tyranny? We will not allow them to continue to infringe upon our rights. We will stand in solidarity with our brothers and our sisters until our grievances have been redressed by our government!”

The GA’s decision is unanimous to stay. Former U.S. Army Staff Sgt. Gary Jaymie Johnson stood up and announced, “I’ve signed up to get arrested. I’ve already called my fiancee and told her what to expect. I contacted Capt. Byrne (of OCPD) myself and asked him if we’d be evicted from the park and he said no, we wouldn’t be. He lied to me. So now I can’t trust the city, I can’t trust the police department. Right here, right now, we’re taking a stand. All of these people out here are the 99% and so are you. And whatever happens, if I get arrested, I will smile when they take my picture.”

Britney Shantel-Guest begins passing around a sign-up sheet for those who are willing to be arrested. Each volunteer is to fill in their full name, phone number, and emergency contact information. Those assembled are assured that anyone arrested will be bailed out of jail.

As the 11 p.m. eviction deadline approaches, a crowd of about 100 people has gathered to defend the park. Marching and chanting helps stave off the 38-degree cold and a biting north wind.

As police encircle the park, occupiers sing Woody Guthrie’s “This Land is Your Land.” The words of Oklahoma’s best-known songwriter seem to have the desired effect on police: They leave quietly.

The following day, U.S. District Judge Timothy DeGiusti granted Occupy OKC’s emergency motion to obtain a Temporary Restraining Order. This would prevent Oklahoma City police from from evicting or making any arrests after curfew until the matter could be decided in court. A hearing was set for the following Wednesday, December 7, on Occupy OKC’s motion for preliminary injunction against the city. The judge also required protesters to post a $550 bond within five days.

The 43-page petition filed in federal court by Occupy OKC addressed point-by-point each reason the city was using to justify an eviction. As in most other cities giving protesters the boot, city officials claimed potential health and safety concerns were the reason for revocation of the group’s permit.. Occupy OKC countered that participants keep the park as clean as possible, but alleged that the city “has been dilatory about picking up trash at the park,” and that “the Defendant City refuses to provide running water to assist in clean up of the park.”

The group also argued that the city’s burdensome permit fees were bankrupting the organization. From the first day of occupation on October 10 until November 27 – the date the city refused to accept any more permit renewal fees – Occupy OKC paid the City of Oklahoma City a total of $2,680. Says the complaint:

“Permit fees charged by the City, and the fees incurred for maintaining portable toilets on-site and service which is an express condition of the permit required by Defendants, have comprised over 90% of the expenses incurred by Occupy OKC. These fees are having the practical effect of starving Occupy OKC and its political message by attrition of funds.”

In the week leading up to Occupy OKC’s court date, the city released information to the media designed to make Occupy OKC look like a burden to the taxpayers. The city claimed that it has spent in excess of $58,000 “protecting” the occupiers, including overtime pay for police officers. Wondering how the city could possibly blow through more money in two months than most Americans make in a year, Occupy OKC challenged the city to provide an itemized detail of expenses:

“Plaintiffs dispute this assertion and would contend that Police conducted unnecessary surveillance of the park, even though two police stations are located within six blocks of Kerr Park and the response time from these stations to Kerr Park would be less than one minute. There is no reason that officers regularly assigned to patrol the downtown area could not have handled any and all calls relating to any activity at Kerr Park, and Occupy OKC did not request or require any extraordinary police presence or protection.”

Late in the afternoon, the city notified Occupy OKC that the planned police eviction set for that night was being postponed. Both sides agreed to wait until a federal judge could hear the case and nervously anticipated what would happen next.

After an exhausting day-long trial on Dec. 7 and a long weekend waiting for the federal judge to decide their fate, a ruling was issued on Dec. 12. The news wasn’t good. Judge DeGiusti’s denial order reads in part:

“The court concludes that plaintiffs have not satisfied their burden to show that the circumstances of the case warrant extraordinary relief and that a preliminary injunction should issue to prevent the city from proceeding to enforce its laws regulating the use of Kerr Park.”

Unlike numerous other cities across the country that openly defied overnight camping ordinances, Occupy OKC perhaps wisely decided to avoid the pepper spray. The group complied with the court’s ruling and agreed to vacate voluntarily. On the night of Dec. 14, the occupiers assembled to break down the tents and say their goodbyes to Poet’s Park.

It was an emotional farewell. This was the place where more than 300 former strangers had sweated out the first General Assembly in 90-plus degree October temperatures. This was where we’d shared many meals together, debated politics, hatched ideas, shared life stories, laughed and quarreled. Here we marched in both the stifling heat and the freezing cold; camped in the pouring rain, experienced a 5.6 earthquake, and frantically battened down the hatches when the first winter storm came barreling in.

This is where we’d met an 18-year-old homeless man named Louis Rodriguez (aka “Street Poet”), who quickly became a beloved part of the camp family. When Street Poet was found dead in his tent here on Halloween, he became the first casualty of the Occupy movement nationwide. His sudden death also had a profound impact on all of us personally. Occupy OKC even managed to track down his estranged family members and flew them in for Louis’ memorial service at this park, now unofficially re-named in his honor.

Everywhere you look around this park, there are memories. Strange how you can become so emotionally attached to a place in such a short period of time. Occupy OKC only resided here for two months, but for those who spent long hours working at the park daily or slept here night after night, it was home.

Only one tent was left behind as a symbolic reminder that the occupiers were once here. The park was otherwise left spic-and-span, with all trash disposed of and all evidence of our occupation erased. A couple of occupiers (who shall not be named for obvious reasons) climbed a tree and hung our battered old American flag from one of the high branches. The hope was that Old Glory would continue to fly long after we were gone. Unfortunately city crews tore down the flag the next day; an irony that wasn’t lost on us. 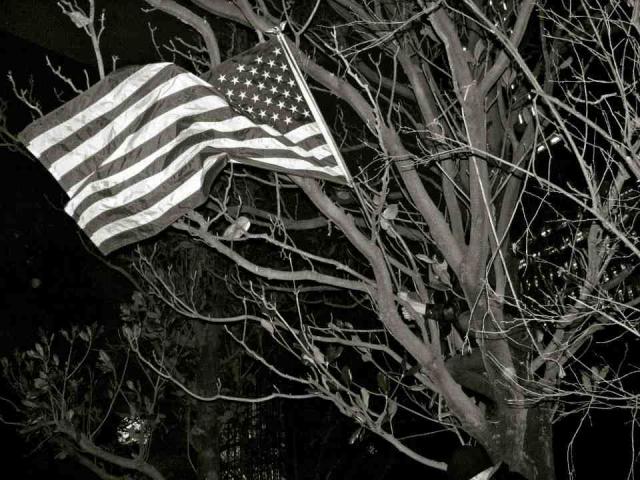 On Christmas Eve, Poet’s Park sat empty and dark. This once-bustling public square in the heart of downtown should have been glistening with colorful Christmas lights. If the occupiers were still here, there would be hot food cooking, music playing and conversations brewing. There would also be a safe and warm tent city for 20-30 homeless members of the 99% to sleep in.

The true spirit of Christmas eluded Oklahoma City officials and a federal judge this holiday season. Here in the buckle of the Bible Belt, “Foxes have holes, and birds of the air have nests, but the Son of Man has nowhere to lay his head.” (Matthew 8:20)

LORI SPENCER is a veteran journalist and musician from Austin, Texas. The newest member of the ThisCantBeHappening! collective, she has visited eight occupy camps throughout the American heartland since early October. Currently she’s an embedded reporter with the Occupy Oklahoma City camp (while managing to squeeze in some holiday time with her family). Look for more of Lori’s traveling occupy journals on TCBH! in the months ahead. Keep up with her journey on Facebook and Twitter.