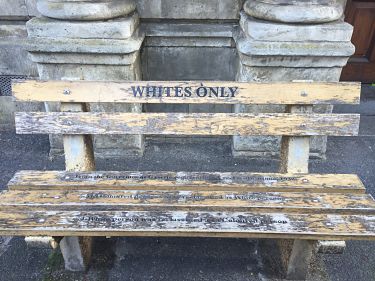 Bench on porch at the White House of Donald Trump? No. Apartheid-era artifact in Cape Town, South Africa. LBWPhoto

U.S. President Donald Trump is a bigot – ’bigley’ – to use a word that he’s used frequently!

Trump is a bigot as defined as someone who doesn’t tolerate people of different races or religions!

But as despicable as Trump’s bigotry is, it is not the big problem driving America’s problem of deep-seated racism.

Trump’s bigotry is rightly being bashed in the wake of the President’s failure to quickly and forcefully condemn the Nazi-praising white nationalists responsible for the riotous violence that erupted recently in Charlottesville, Va, violence that produced one death and many injuries.

Those proudly prejudiced white supremacists that descended on Charlottesville for odious domestic terrorism proclaimed themselves as fervent supporters of businessman-turned-president Trump.

“Trump’s run for office electrified the radical right, which saw in him a champion of the idea that America is fundamentally a white man’s country,” stated a report issued earlier this year by the Southern Poverty Law Center (SPLC), an organization that monitors hate groups in America.

In the weeks after Trump’s November 2016 election the SPLC documented 1,094 hate incidents. “The hate was clearly tied directly to Trump’s victory,” stated a December 2016 SPLC report.

Remember, Trump is the guy who installed a leading advocate of white nationalism (Steve Bannon) as his chief strategist in the White House.

Also, Trump is the guy who shortly after his formal inauguration announced a ban on Muslim immigrants, ramped up deportations that targeted Hispanics and deemphasized federal enforcement of civil rights and voting rights laws – policy positions that won applause from white nationalists and political conservatives.

Trump, months ago, ordered the Department of Homeland Security to sharply scale back its monitoring of white hate groups in America. Trump issued this order despite that fact that numerous studies have documented that white hate groups were responsible for double the amount of domestic terrorism from property destruction to deaths between 2008 and 2016 than incidents attributable to the ‘radical Islamic terrorism’ that Trump rails against incessantly. 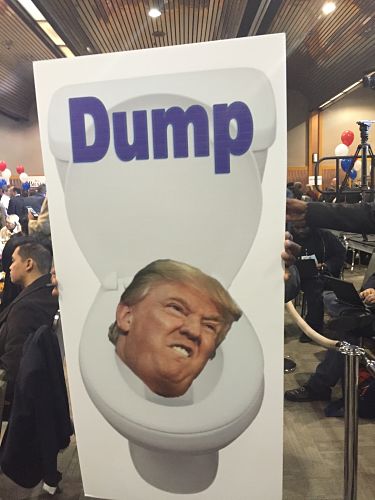 Shockingly, white hate groups have specifically targeted law enforcement from police to prosecutors to prison authorities. While that targeting makes white hate groups both terrorists and traitors apparently that violence directed at law enforcers is not an issue of import for President Trump…who has castigated anti-police-abuse groups like the Black Lives Matters movement.

Bannon is not the only proud bigot placed in a ranking Trump Administration position. Trumps U.S. Attorney General is Jeff Sessions – the former U.S. Senator from Alabama who refused to fault the racist KKK until he discovered some KKK members smoked marijuana, the substance Sessions deems an evil weed.

However, a tight focus on the bigotry of Trump and his band of confederates obscures the core problem driving racism.

More pernicious than Trump’s bigotry is the persistent failure of too many Americans to decisively oppose the institutional racism that has eviscerated the so-called American ideal of equitable access to opportunity since the creation of this nation.

An ugly problem – historically – has been the practice among too many Americans of denying or justifying institutional racism.

This practice is glaringly evident in the election of Trump, who did not attempt to disguise his bigotry during his presidential campaign that garnered 62.9 million votes.

While white supremacists did vote en masse for Trump, his voter base was not composed entirely of persons who would define themselves as racists. Millions of Trump voters, who proclaim abhorrence to Neo-Nazis, the KKK and other white hate groups, still supported a candidate who blatantly burnished bigotry.

That mob of white nationalists came to Charlottesville to oppose removal of a Confederate statue. The Confederacy, after all, sought to preserve slavery and rebelled against the federal government.

Many who support keeping in place Confederate monuments, ranging from statues of Confederate heroes to the Confederate battle flag, who are not card-carrying white nationalists, justify their position as ‘Heritage Not Hate.’ Yet, Southern history revolving around the Confederacy and its progeny is a heritage that is steeped in naked racial hatred. After the Civil War ended with defeat of the Confederacy, southern whites unleashed a reign of violent terror across the former Confederacy to re-subjugate blacks, a campaign that included thousands of lynchings.

In 2005, when the U.S. Senate approved a resolution apologizing for that body’s refusal to approve any of the 200 anti-lynching laws proposed during the late 19th and early 20th centuries, 13 Senators – all Republicans – refused to endorse that tepid apology…evidencing their denial/justification of institutional racism.

Many of the same Republican Senators now receiving praise for condemning President Trump for his coddling of white nationalists in his initial statements about the Charlottesville horror have actively engaged in the GOP’s long practice of exploiting race prejudice to win elections.

Orrin Hatch, one of those Senators now calling out Trump for his stilled tongue regarding white supremacy, has assailed affirmative action initiatives for years, deeming those initiatives devised to remediate institutional racism as repugnant reverse discrimination against whites. This is the same Hatch who was able to work his way through law school by working in a building trades union run by his uncle — a union that excluded blacks. That same Hatch who hates affirmative action for blacks shamelessly accepted unearned white privilege (a/k/a: white affirmative action) that enabled him to help fund his education through an uncle’s segregationist practices that barred qualified blacks from employment opportunities that could fund their advancements from education to savings.

The Senators that voted to elevate Gorsuch to the U.S. Supreme Court – all Republicans plus three Democrats – denied/justified the employment bigotry of that jurist. Senators practiced institutional racism in their vote that excused the individual bigotry of Gorsuch. In fidelity to fact, the Democratic Senators that voted against the confirmation of Gorsuch sidestepped the bigotry implicit in his nomination with failures to question Gorsuch on his prejudicial employment practices.

The American-as-apple-pie denials and justifications of racial prejudice radiate far beyond politics, permeating all areas from academia to churches to corporate boardrooms and the news media.

Earlier this year, for example, NBC hired Megyn Kelly, a broadcast personality with a racially incendiary record during her time on the right-wing FOX News network. On FOX, Kelly often gave succor to anti-immigrant stances, like those uttered by Trump.

Democratic U.S. Senator Al Franken, a darling of liberals, once hosted a program on the now defunct Air America radio network where the paucity of black guests on his program mirrored the embarrassing paucity of black executives in the touted business empire Donald Trump headed before his election to the presidency. The television network once owned by former Democratic Vice-President Al Gore did not establish benchmarks for diverse staffing or content.

Contrary to Trump’s contention that more study is needed on racism “to see what we’re doing wrong as a country” this is a time for action against the institutional racism that has been denied/justified/ignored by too many Americans for too long.