I was a Fulbright professor of journalism in 1991, posted for a year in the Graduate School of Journalism at China’s prestigious Fudan University in Shanghai.

Over the year I made many friends among the faculty and especially among my graduate students, many of whom had been democracy activists, either in Beijing or in Shanghai, during the events of the Tiananmen occupation and eventual crushing of that movement. during 1989, two years before my arrival.

At the time I was in China, there were very few statues of Mao Zedong, the celebrated leader of the victorious Chinese Communist revolution. Because of the horrors of the Cultural Revolution and earlier anti-rightist campaigns he had orchestrated, his reputation had understandably and deservedly suffered badly.

As a result, while Mao statues had been ubiquitous all over China only a decade earlier, by the time I arrived (20 years after having graduated with a degree in Chinese language and plans to go to China to witness and write about the “glories” of the Cultural Revolution), I found in Shanghai only two remaining statues of the Chairman — one inside the entrance gate to Tongji University, a technical school, and one inside the front gate of Fudan University.

The Tongji statue featured a younger Mao posed in a romantic stance waiving to his people. The Fudan statue had a more forbidding stance, quite tall, representing the chairman in his formal Mao suit, feet together, and arms clasped behind his back, looking sternly down at the viewer. The statue had been designed to look even bigger and more imposing than it was by the enlargement of the feet and the bottom of the legs (much like an R Crumb cartoon), with the body shrinking to a much too small head at the top to give the illusion of height. 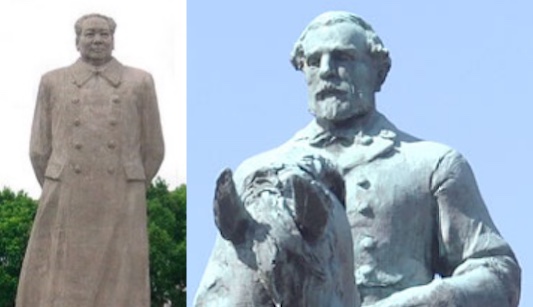 Mao Zedong and Robert E Lee: Do we need to see their statues every day in the public square?

I asked a friend, a Fudan professor who had lived through the anti-rightist campaign of the ’50s as well as the Cultural Revolution, why those two statues had been left standing, while all the others seemed to have been eliminated in Shanghai and most of China.

I puzzled over his words for a moment and then I got it. He meant that the Party officials who run the two universities, which had been hotbeds of rebellion in 1989 and of democracy activism in earlier years, wanted their faculties and students both to remember the excesses of Mao’s Cultural Revolution (by then Mao was a very controversial figure among the Chinese people, revered as almost a god by some, and reviled by others), and also to remember what can happen to those who stand against the Chinese state and the absolute authority of the Communist Party.

The monuments to the Confederacy in the US are much the same as those Mao statues in Shanghai: functioning as both historical memorials and as current objects of intimidation.

After the massive suffering and death caused by the Cultural Revolution and other Maoist campaigns during the years after 1949, many people in China didn’t want to be reminded of it all by having to look at monumental edifices glorifying the psychopath responsible for those events. But of course there were many who also thought of Mao as the father of their country and revered him, sometimes, as with the cab drivers who would ride with a red-and-gold framed photo of Mao hanging from their rear-view mirror as a good luck charm, treating his image almost like an image of Buddha or Guanyin.

Just so, after the Civil War and Reconstruction, many people in both the South and North wanted to move on, and to forget the belligerence. But some people wanted to remember the cause by celebrating the leaders of the white rebellion that was Southern secession, and like those Party officials at Tongji and Fudan, they wanted to remind the freed black slaves who was boss: the resurgent whites who had lost the war. Hence a spate of erecting statues of the likes of Gen. Lee and Gen. Jackson.

My own feeling is that statues honoring the generals of the Confederacy, and the CSA’s president Jefferson Davis, are not just an outrage because these guys are all traitors to the United States, and were fighting not for “states’ rights” as often alleged by their defenders, but for the preservation of the vile and absolutely indefensible institution of slavery. They are also an insult to any black resident of the city in which they are allowed to continue to stand. (Richmond, VA, with its Monument Drive lined with statues of Confederate generals, is today 57% black.)

As two of Confederate Gen. Stonewall Jackson’s great great grandsons recently declared in a letter to the mayor of Richmond published also in Slate magazine, the Confederate statues erected a cross the South are not about glorifying heroes of some virtuous battle, but rather were erected later in the 19th Century and onward, after Reconstruction had ended, in an era when white supremacy was on the rise — with the violent help of the Ku Klux Klan, a tsunami of lynchings, and the introduction of segregation and poll taxes — as a threat designed to keep black people in their “place,” terrified and blocked from political and economic power.

The two brothers, Jack Christian and Warren Christian, in calling for the removal of Confederate statues including those of their famous/infamous ancestor Gen. Stonewall Jackson, write:

Instead of lauding Jackson’s violence, we choose to celebrate Stonewall’s sister—our great-great-grandaunt—Laura Jackson Arnold. As an adult Laura became a staunch Unionist and abolitionist. Though she and Stonewall were incredibly close through childhood, she never spoke to Stonewall after his decision to support the Confederacy. We choose to stand on the right side of history with Laura Jackson Arnold.

They go on to write:

Confederate monuments like the Jackson statue were never intended as benign symbols. Rather, they were the clearly articulated artwork of white supremacy. Among many examples, we can see this plainly if we look at the dedication of a Confederate statue at the University of North Carolina, in which a speaker proclaimed that the Confederate soldier “saved the very life of the Anglo-Saxon race in the South.” Disturbingly, he went on to recount a tale of performing the “pleasing duty” of “horse whipping” a black woman in front of federal soldiers. All over the South, this grotesque message is conveyed by similar monuments. As importantly, this message is clear to today’s avowed white supremacists.

There is a gross hypocrisy in President Trump’s at least feigned emotional defense of the “beautiful statues” of Lee, Davis, Jackson and other Confederate “heroes,” and of the “good people” whose only goal, he claims, is allegedly defending their “cultural heritage.” This is not about protesting some “PC” attack on the Confederacy, or about fighting to preserve the historical record.

Recall the chest thumping and the media gloating we witnessed as statues of Saddam Hussein were torn down by the American victors of the illegal invasion of Iraq? Recall too the US excitement and patriotic enthusiasm of the “USA! USA!” crowd as Russians began tearing down statues of Stalin and even Lenin across the former Soviet Union? There were and are many Iraqis who liked Saddam and the modern Arab state he created. There are perhaps millions of Russians who still revere Lenin for ending the Tsarist state and bringing Russia into the modern world. There are even millions of Russians who still revere Stalin for making their country a world power and for defeating the invading Nazi army in World War II. Yet were any Americans decrying the erasing of that history in Iraq or Russia? I’m not saying Lenin’s and Stalin’s statues shouldn’t be torn down — certainly Stalin’s should — but what makes Stalin any different in a qualitative way, from Lee or Jackson or Davis?

My feeling is that we don’t need statues of white supremacist traitors who fought this nation’s bloodiest war in the name of perpetuating slavery in order to help us remember this nation’s history any more than Germany needs statues reminding its people of Adolf Hitler. And if bigots, fascists and white supremacists in this nation want to have statuary to remind them about or to celebrate its most sordid chapters, they can put them up on private land and pay the costs for maintaining them. Memorials to such vile human beings don’t belong in public spaces supported by public tax dollars — especially the tax dollars paid by descendants of the very people that the subjects of those statues fought to keep enslaved.

If we have to have them, maybe we could require that the reprehensible sculptures be accompanied by one of their most famous defenders: Donald J. Trump. (I’m thinking here of the nude sculptures of a naked Trump with small hands and tiny genitals that were produced by sculptor Joshua Monroe and placed strategically around the country in public spaces during the presidential campaign by an anarchist group: