I never really knew Pete Seeger, but he taught me how to play the banjo.

As a young amateur musician in junior high school in the early 1960s, just learning to play guitar and banjo and to sing folksongs, I certainly felt like I I knew him, going through the instructions in the manual he and his life companion Toshi copied and stapled together themselves. His high tenor renditions of wonderful old folk tunes that I’d never heard before, and his renditions of the powerful political songs of people like Woody Guthrie and Joe Hill–people I’d never heard of–didn’t just broaden my musical sensibilities, but actually shaped me politically more than I could have possibly realized at the time.

A few years later, as I got old enough to have to confront the draft, and to think about the horrors of the US war on the people of Vietnam, Laos and Cambodia, and as I began to attend major anti-war demonstrations, there was always Pete there, banjo gripped by the neck, lanky in his bluejeans, climbing up on the stage to sing one anti-war anthem after another.

He never got old. I remember going to hear him back in the late 1970s at a SRO concert at UCLA’s Royce Hall, and just being amazed at the range of ages in the audience, from little toddlers sitting on their parents’ shoulders in the standees area at the back of the hall to ancient-looking people sitting in the seats, craning to hear through aging ears. 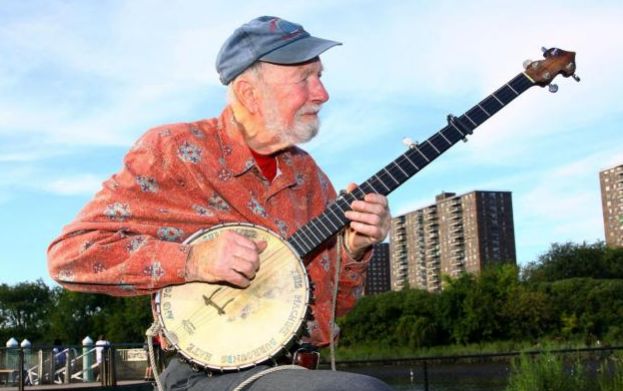 But of course he did get old, finally even losing his singing voice. At one point, back in the mid-1980s during the Reagan administration years when I was living in New York, there was a plan to base the refurbished WWII battleship Iowa on Staten Island at the mouth of the Hudson River. The ship by 1984 had been retrofitted with nuclear-capable cruise missiles, and was going to be a terrible blot on the whole region if it were based there. Of course, it was also going to be sitting in the very river that Pete had decided to devote his latter years trying to clean up from all the toxic PCBs and other pollutants that corporations like GE had been dumping into it like their personal sewer for decades.

There was a big movement developing to oppose the Iowa basing plan, and so I wrote a song to go with it: “No More Iowas in our Bay.” I sang it at an anti-Iowa homeport rally held at the eastern base of the Verrazano Bridge, and it received a good response. Then, thinking I should try to get it more attention, I sent the words and a cassette recording I had made of myself performing the tune, to Pete at his home upstream in Beacon, NY.

I got a note back from him a few weeks later. “Thanks for your song Dave,” he wrote. “It’s a good one. Unfortunately, at my age , I’m not learning new lyrics as easily anymore, so I can’t promise to learn it. Why don’t you send it on to Charlie King?” (He would have been in his mid-60s by then — my age today! — and I can appreciate now what he was talking about!)

He signed the note with his characteristic signature: Pete, ending with a clever, quick sketch of his long-necked 5-string banjo that was a continuation of the line extending from the letter “e” at the end of his name.

It’s a letter I treasure, partly just because I thought it was so cool of Pete, who I’m sure was overwhelmed with letters like mine, and many more of a more important nature, to take the time and respond with a hand-written, personal note.

My other remembrance of Pete was a concert he gave around 1990 or 1991 at Cornell University in Ithaca, NY. Again a huge university concert hall was packed with people of all ages. Pete sang many of his staples from a lifetime of song and political action: “Where Have All the Flowers Gone,” “Big Muddy,” “We Shall Overcome,” “If I Had a Hammer,” etc. He also sang the song about the murder of Chilean folksinger Victor Jara in the soccer stadium of Santiago, Chile during the Pinochet coup of 1973 that overthrew the elected Marxist president Salvator Allende Gossens. Then he sang a beautiful, sad and heroic song I had not heard before, from the Spanish Civil War. It was about a Loyalist woman soldier who chooses to die covering a fallen grenade with her body to protect her Republican comrades-in-arms. After the song, which caused a lump in my throat and my eyes to tear, he quietly made a confession, telling the assembled audience that he had mixed feelings about it.

He told a hushed auditorium of people that he had been a member of the Communist Party in the 1930s, and that when the Party was opposing fascism in Europe, he dutifully sang anti-fascist songs glorifying revolution and the battle against Franco in Spain. Then, he said, when the Germans began World War II, attacking France and the Low Countries, and then attacked Britain, and the Party was opposed to the US entering the war, he sang anti-war songs. Finally, he said, when Hitler attacked the Soviet Union, and the American branch of the Party changed course and wanted the US to enter the war against Hitler, he switched to singing patriotic, anti-fascist songs.

He told us (and here I’m paraphrasing), “I now think that war is generally a bad thing, and that it’s important for people to think for themselves, not to follow a party line.”

This was stated humbly by a man who had nothing to apologize for, a man who in 1955 had bravely stood up to the House Unamerican Activities Committee and refused to name names or to answer questions about whether he was or had ever been a Communist (he was sentenced to 10 years in jail on 10 counts of contempt of Congress, later overturned on appeal, but was blacklisted for years from radio and TV for his stand). But at that concert at Cornell, he felt it was time to both explain himself and to say he had changed in his views, particularly about war.

That took another kind of courage.

Seeger was a man of extraordinary courage, dedication and passion, and through his music, he passed those qualities on to all of us who listened to him and learned from him.

Larger than life, but somehow always able to come across, even on stage before thousands of people, or in a phone interview with a young, no-name journalist, as very human and approachable, Pete Seeger will be sorely missed as we continue our struggle against the war-mongers, the plutocrats, the political charlatans and the greedy capitalists who are hell-bent on grabbing whatever they still can and destroying the very planet in the process, but his songs are still with us, to help us carry on.