GE, the company that boasts that it “brings good things to life,” was the designer of the nuclear plants that are blowing up like hot popcorn kernels at the Fukushima Dai-ichi generating plant north of Tokyo that was hit by the double-whammy of a 9.0 earthquake and a huge tsunami.

The company may escape tens or hundreds of billions of dollars in liability from this continuing disaster, which could still result in a catastrophic total meltdown of one or more of the reactors (as of this writing three of the reactors are reported to have suffered explosions and partial meltdowns, and all could potentially become more serious total meltdowns with a rupture of the reactor container), thanks to Japanese law, which makes the operator–in this case Tokyo Electric Power Co. (TEPCO) liable. But if it were found that it was design flaws by GE that caused the problem, presumably TEPCO or the Japanese government could pursue GE for damages.

In fact, the design of these facilities–a design which, it should be noted, was also used in 23 nuclear plants operating in the US in Alabama, Georgia, Illinois, Iowa, Massachusetts, Minnesota, Nebraska, New Jersey, New York, North Carolina, Pennsylvania and Vermont–appear to have included serious flaws, from a safety perspective.

The drawings of the plants in question, called Mark I Reactors, provide no way for venting hydrogen gas from the containment buildings, despite the fact that one of the first things that happens in the event of a cooling failure is the massive production of hydrogen gas by the exposed fuel rods in the core. This is why three of the nuclear generator buildings at Fukushima Dai-ichi have exploded with tremendous force blasting off the roof and walls of the structures, and damaging control equipment needed to control the reactors. 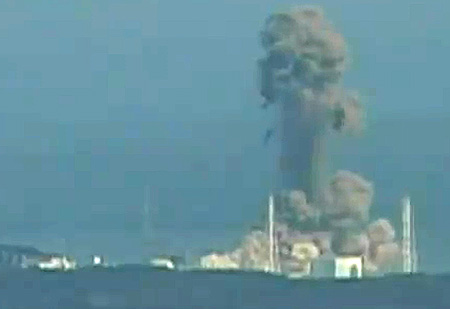 There is a worse problem though. Probably in an effort to keep the problem of nuclear waste hidden from the public, these plants feature huge pools of water up in the higher level of the containment building above the reactors, which hold the spent fuel rods from the reactor. These rods are still “hot” but besides the uranium fuel pellets, they also contain the highly radioactive and potentially biologically active decay products of the fission process–particularly radioactive Cesium 137, Iodine 131 and Strontium 90. (Some of GE’s plants in the US feature this same design. The two GE Peach Bottom reactors near me, for example, each have two spent fuel tanks sitting above their reactors.)

As Robert Alvarez, a former nuclear energy adviser to President Bill Clinton, has written, if these waste containers, euphemistically called “ponds,” were to be damaged in an explosion and lose their cooling and radiation-shielding water, they could burst into flame from the resulting burning of the highly flammable zirconium cladding of the fuel rods, blasting perhaps three to nine times as much of these materials into the air as was released by the Chernobyl reactor disaster. (And that’s if just one reactor blows!) Each pool, Alvarez says, generally contains five to ten times as much nuclear material as the reactors themselves. Alvarez cites a 1997 Nuclear Regulatory Commission study that predicted that a waste pool fire could render a 188-square-mile area “uninhabitable” and do $59 billion worth of damage (but that was 13 years ago).

Another nuclear scientist agrees with Alvarez, quoted in an article in the Christian Science Monitor:

“There should be much more attention paid to the spent-fuel pools,” says Arjun Makhijani, a nuclear engineer and president of the anti-nuclear power Institute for Energy and Environmental Research. “If there’s a complete loss of containment [and thus the water inside], it can catch fire. There’s a huge amount of radioactivity inside – far more than is inside the reactors. The damaged reactors are less likely to spread the same vast amounts of radiation that Chernobyl did, but a spent-fuel pool fire could very well produce damage similar to or even greater than Chernobyl.”

Adding to that worry, Alvarez says photos of Reactor 3 seem to show white steam rising from the damaged facility, from a location where the spent fuel pond would likely be. (See photo below)

Steam appears to be billowing up from the damaged Reactor 3 at the Fukushima Dai-ishi plant, suggesting the pool containing spent fuel rods is compromised

But it gets worse. According to news reports, the Reactor 3 unit was using fueled MOX fuel rods– a mix of which includes, in addition to uranium, a significant amount of plutonium–a far more dangerous element both chemically as a toxin, and in terms of its radioactivity.

You have to ask, what kind of numbskull would put a waste “pond” for spent fuel right above the reactor of a nuclear plant, thus insuring that in the event of a meltdown, not only would the core of the reactor blow up into the environment, but also all of the spent fuel from prior years? All that “Six Sigma” quality culture stuff tauted at GE and they came up with this?

I don’t know. I heard about those waste “pools” in the past, and always assumed they were somewhere on the plant grounds away from the reactor itself, but now it turns out they put the damned things right in the line of fire of any meltdown. Boy, that’s just brilliant!

This may explain why people in India are reportedly rethinking GE’s bid for a big piece of the country’s proposed market for $150 billion in new nuclear power plants in that country, and why it may not be so easy for GE and other nuclear plant builders to escape liability for their products in the future.

Back in November, President Obama was in India pushing that country’s government to pass legislation exempting GE from liability for nuclear “accidents.” That idea is probably not going to go very far now.

Jeffrey Immelt, the chairman and CEO of GE and a big friend of Obama’s (he was named to an unpaid post as “jobs czar” by the president earlier this year, despite the company’s long record of exporting US jobs to places like China and India), says it’s “too soon” to assess the impact on the company’s nuclear business prospects of the nuclear “accidents” in northern Japan.

He’s certainly right about that (though investors aren’t waiting: the stock was down 3.5% today alone by noon, following the second hydrogen gas explosion). At this point only two of the buildings housing the six troubled reactors has blown up, and TEPCO has only lost control of the cooling systems in three of the six, and also, so far, only three have suffered partial meltdowns. Things could get a lot worse if one or more goes into full meltdown, or if one or more of those waste “ponds” blows up.

GE may end up having to change its motto to: “GE brings death to things.”