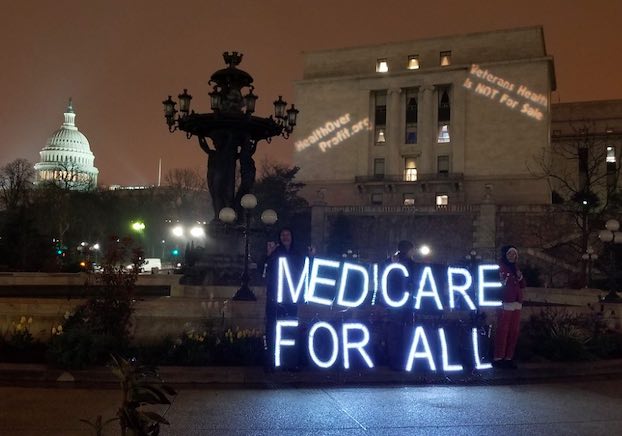 It is increasingly clear that the wagons have circled both in the Democratic National Committee and in the news media to shut down any possibility of a national health plan as proposed by Physicians for a National Health Program (PNHP) or Democratic presidential candidate Bernie Sanders.

The media for their part, keep touting — almost a year and a half before Election day, and just under a year after next year’s Democratic primary voting and caucusing, that two “centrists” (who should be called the Establishment candidates, both neo-Liberals in the Clinton mold) — Joe Biden and Kamala Harris as the “leading candidates” for the Democratic presidential nomination.

Biden is quoted favorably for perpetrating the lie that establishing a new “single-payer” program of government insurance covering everyone would mean “starting from scratch” and taking away everyone’s current employer-funded, or Obamacare subsidized health insurance.

Meanwhile Harris, who was against Medicare for All before she was for it, and who now talks about “funding” it with taxes on Wall Street, is treated like the voice of reason, when in fact she’s just blowing smoke and confusing the issue deliberately.

So let’s get this straight.  Funding a program of what Bernie Sanders and health care activists call Medicare for All, would cost an estimated $30 trillion over the next 10 years (that last bit about over ten years tends to get left out of articles criticizing the plan), as in this report in the National Review.  But it’s not just right wing media that obfuscate.  In a CNN interview of Harris, reporter Kyung Lah just says Sen. Sanders says the plan will  “require a middle class tax hike” to fund.

But Lah doesn’t say, and Harris, who is smart enough to know, but doesn’t want to admit publicly, that the US healthcare system today already costs more than $3 trillion per year and will cost much more than $30 trillion over the next 10 years.

Here’s the real story.  As things stand presently, health care costs in the US account for 18% of total US Gross Domestic Product. That is to say, 18 % of all economic transactions in the US, government and private sector, go for medical care. That’s 18% of $21.1trillion in 1019, or about $3.7 trillion. In constant dollars over the course of the next decade that would be $37 trillion.

That figure includes the cost of Medicare for the elderly and disabled — a program that is already funded by taxes paid by individuals and their employers (the federal budget for Medicaid, financed by those taxes, is about $600 billion this year).  Add to that the amount for Medicaid, which provides health benefits for one-in-five Americans unable to obtain private insurance and which is funded by the federal government and the states (also about $600 billion this year), and taxpayers are already funding some $1.2 trillion of the US health care bill through taxation. Then add in the cost of private insurance, paid by both employers and employees, or for those working at stingier employers, or for themselves, through insurance offered under the ironically named Affordable Care Act (Obamacare), which is about $2.2 trillion, and the cost of medical care paid out-of-pocket because it’s not covered by increasingly loophole-plagued insurance plans (another $400 billion, and Americans and their employers are already paying a total of $3.6 trillion per year for health care. But this haphazard free-marked/government-funded tacked-together chaos that we call American-style healthcare still leaves  30 million citizens uninsured!

Now note that all of those expenditures — all $3.6 trillion of it — would be eliminated to be replaced by dedicated taxes paid by citizens and private companies to fund a real Canadian-style system of what is being called Medicare for All.   On top of that, there would be no more worrying about paying medical bills, worrying about whether pre-existing conditions would be covered, worrying about losing a house because of medical expenses, or losing benefits if one lost a job, or needed to go out on strike to fight for better pay or working conditions.  Your publicly funded health care would be a right, just like the right of free speech or the right to vote.

So saying, as CNN reporter Lah does so disingenuously, that the Sanders Medicare for All plan will “require a middle-class tax hike” is a grotesque fraud on the public.  Medicare for All, which even a right-wing Koch-Brothers study claimed disparagingly would cost $30 trillion in tax funding over a ten-year period, while true, would actually cost some $6-7 trillion less in constant dollars than the current joke of a “system” we have in the US.

I would point out, for those who don’t know it, that Canada, our neighbor to the north, has had a kind of “Medicare for All” system in place since 1976 — in fact it’s called Medicare.  And that system, which covers the medical care of all Canadians, no exception, and is financed entirely by taxes paid by individuals and businesses,  is so popular that even though Canada and its provinces (which actually administer the system) all have been governed more often by conservatives than liberals or socialists over the intervening years, not one government, even the arch-conservative federal government of Stephen Harper that preceded the current one led by Liberal Party leader Justin Trudeau, dared to cut it or to try to undo it.  To do so would be to face immediate ouster, so popular is Canada’s Medicare program.

I would add that even in the UK, which has a truly socialist health care system, which, much like our huge and, from a point of quality, if not access, excellent Veterans Health Care System, features public hospitals owned by the government and physicians and support staff who are government employees paid salaries, not fees for service, no conservative government has dared to try and undo the system put in place by a Labour government just after the end of World War II nearly three-quarters of a century ago.

Harris deserves to be pummeled in upcoming debates, at her campaign appearances and in the media for her failure to admit that Sanders’ Medicare for All plan would not increase the costs of healthcare by raising taxes, but would actually reduce those costs by freeing those 160 million Americans who are currently trapped in costly bondage to their employers, depending on them for offering mostly crappy private health insurance coverage that they would lose if they lost those jobs, would end taxes for increasingly privatized Medicare and for hard-to-get and always threatened Medicaid, and would slash the costs of prescription drugs (now running at close to $500 billion a year).

Meanwhile, while in place of those taxes, and while eliminating private payment and employer payment of insurance premiums, there would surely have to be taxes paid by individuals and businesses to fund a new public insurance system like Medicare for All, there need not be a major increase in middle-class taxes.  Harris and other half-hearted “backers” of the Sanders program — and Sanders himself — should be calling for massive cuts in military spending, which is now running at a record $1.3 trillion per year. Some of the tax savings from cutting military spending down to size could go to fund public healthcare.

Now that would be real “national defense”!

I don’t object to Harris’s proposal in her pathetic CNN interview, that taxes be increased on Wall Street and the Financial sector to fund health care,  but that’s small beer compared to the funds available from cutting the US military down to size and ending the current imperial policy of endless wars and of military action instead of diplomacy in foreign affairs.

First though, we need an honest debate about Medicare-for-All — not one that hides the issue behind false warnings about “increased middle-class taxes” to fund it.

Everyone will save money under Medicare-for-All, and we will have a far, far healthier population to show for it.  Even Sanders himself has done a poor job of making this point in his campaigning. Why doesn’t he just say it: Americans will be financially, and medically, better off if they paid a bit more in taxes to obtain full coverage under Medicare for All and eliminated the premiums they and their employer now pay for increasingly costly and ever less adequate private insurance coverage.

The clear advantage of government-provided over privately funded health care is why every other developed nation in the world, and many less developed ones, has some form of nationally-funded health care system that treats health care as a right, why every one of those countries spends less total money as both a share of GDP and national budget, and on a per-capita basis than we do in the US, on healthcare, and yet, in all developed country cases and in many less developed countries, they have better health statistics  than we have here in he US (that includes life expectancy, infant mortality rates, incidence of diabetes and untreated high blood pressure, etc.).

Time for some god-damned honesty about this issue from both our politicians and the media!