There is a Big Lie underlying the $1.5-trillion Trump/Republican Congressional tax bill. That lie — the kind that is so brazen its purveyors hope it will simply be accepted as truth — is that when corporations get their big tax break, they will pass much of it on to workers in the form of higher wages, and perhaps to consumers in the form of lower prices.

How do I know it’s a Big Lie? Basic economics and history.

Let’s take care of the consumer economics argument first. Prices in the US, at least in those parts of the economy that are still competitive, are based on the law of supply and demand. Anyone selling a product or service will charge a price that maximizes profits, and that price is determined by buyer demand. Up and down the chain from suppliers to manufacturers to distributors to retailers, this system works itself into the final product offered to consumers. At no point in that chain does management say, “Hey, we’re paying lower taxes this year. We should cut the price on our widgets and pass the benefits along.” Why would they? They’ve already learned what customers are willing to pay for their widgets, and know the magic point where a higher price starts to reduce demand to the point that it is counter-productive, and they’ve also learned how much cutting the price will increase sales and where further cuts just mean selling the same number of widgets but at a lower price. And those two boundary points don’t change just because taxes — a cost of doing business — get lower. Far better to pocket that extra money for the benefit of management or for the shareholders. 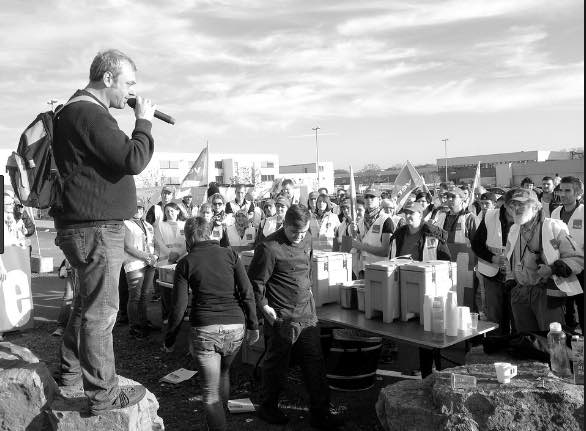 But what about wages? There’s this faery tale being told by Republicans and by President Trump (a businessman known for being tight-assed when it comes to paying staff, and even for stiffing people whenever possible, besides for “grabbing pussy” when available) that if businesses got a big tax break, they’d use at least some of it to offer their employees higher wages.

Does anyone really believe that? If that were the case, why would the corporate world and outfits like the US Chamber of Commerce be fighting tooth and nail as they have been against every effort in cities and states across the country, and in Congress, to raise in the pathetic $7.25/hour minimum wage (a wage that has not gone up since back in 2009 at the depths of the Great Recession!)? The truth is corporate America loves the starvation level of the minimum wage because they use various taxpayer-funded welfare programs — Aid to Families with Dependent Children, Food Stamps, WIC and the like — to actually subsidize their workforce for them so they don’t need to offer workers a living wage.

But more importantly, if corporate managers and owners really cared about the shamelessly low wages paid to their workers, why would they for the last several decades have been aggressively lobbying to get the federal government to weaken labor laws as they have done so they could essentially crush the US labor movement, which today represents only 6.4% of private sector workers. That unionization rate compares to 35% of workers back in the mid-1950s, at a time when most union jobs were in the private sector — and when blue-collar workers were entering the middle class in droves. Now most remaining union jobs are in the public sector — federal, state and municipal — where the rate of unionization is still 34.4%. But public sector workers comprise such a small group over all that when combined, the unionization rate of all US workers in 2016 was a record low 10.7%, representing in total 14.6 million workers. And that is a smaller actual number of unionized workers than the number in 1983, the first year comparable data to today’s count was available, when a total of 17.7 million workers were in a union. But note that the total US population today is 27% greater than it was 35 years ago.

A 50-year uninterrupted year-on-year decline in unionization has been proceeding, by the way, despite polls that have consistently shown that most workers, when asked, say they would like to have a union representing them if they could get one. Despite generally negative media coverage of labor unions, even today according to the Gallup organization, 61 percent of Americans say they are in favor of labor unions, compared to 33% who oppose them. Clearly, if federal and state labor laws were not stacked against workers, who today (thanks to the efforts of both Republicans and Democrats in Congress and statehouses) can easily be fired for union organizing activity with no serious penalties on employers for doing so, unionization rates among American workers would be vastly higher than they are.

Trump, in his Monday speech outlining his National Security Strategy, claimed that his election had returned the governance of America to “the people,” and that it would now be acting in their interest. If that were so, a Greenberg Quinlan Rosner Research poll conducted this year which found 54% of workers saying that if they could have a union in their workplace they would want to have one argues he and his Congressional lickspittles should be calling for labor law reform to make it easier to form a union and harder for employers to block organizing or to refuse to bargain.

Unions in the US, while they do engage in politics, exist primarily for one reason: to give workers bargaining power so they can get the boss to pay them better wages. Of course they defend workers against harassment on the job, fight for workplace safety and better working conditions too, but the big thing is using collective power to force employers to part with some of their profits to pay them better. And that is precisely why capitalists hate unions.

I laughed out loud when I was listening to a report on NPR’s “Marketplace” program as breezy host Kai Ryssdal did a piece on the “mystery” of why essentially “full employment” in the US was not leading to a rise in wages. The always cheery Ryssdal said that outgoing Federal Reserve Chair Janet Yellen and her colleagues professed themselves “puzzled” at this situation.

Really? Why the mystery? If a significant percentage of the workforce no longer are in unions, where is the impetus to compel greedy capitalists to part with any of their record profits to raise wages? The mystery is why anyone would believe that Yellen and her colleagues are genuinely mystified.

And yet, I challenge anyone to find a serious discussion of this in the corporate media, where nobody is pointing out the reality that at no time in history have capitalists willingly parted with any of their profits to raise worker compensation unless forced to by worker demands, and nobody is pointing out that the claim that “tax cuts pay for themselves” was already tried and exposed as a fraud during the Reagan administration when it was known as “supply-side theory.”

There is going to be no gain in wages as a result of passage of this outrage of a tax “reform” bill. And that means it’s really all just a big wet-kiss transfer of wealth to the unneedy but every greedy rich and one which, far from “paying for itself through new economic growth” as the Trump claim goes, will just end up adding another $1.5 trillion to the federal deficit, while further widening the nation’s unprecedented income chasm. At some point even the people Hillary Clinton called Trump’s “deplorables” — his “forgotten Americans” — will realize they’ve been conned yet again.