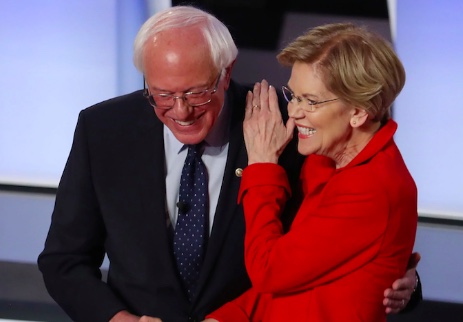 Word that Elizabeth Warren is reconsidering her run for the Democratic presidential nomination, and that she and Bernie Sanders are looking at the idea joining to form a progressive “united front,” are encouraging.

It is clear that the Democratic neoliberal establishment has gone to war on its left wing — willing to risk losing the November election to keep the Democratic Party from being taken over by progressives and democratic socialists.

The red-baiting of Sanders on the party’s nationally televised debate stage, which happened more than once with nobody calling “foul!,” has been despicable.  Imagine, for a moment, if a Democratic contender were to call an opponent in a nationally televised party debate a “fascist” or a “Nazi.”  There would be an immediate outcry from all other contenders, from party leaders, and from elected officials of the party.  But calling Sanders a Communist or a Stalinist, or claiming that his policies resemble those of Castro’s Cuba or Maduro’s Venezuela, are allowed to sail right past, undenounced for what they are:  McCarthyite red-baiting. When the same people who call Russia’s Vladimir a thug then equate Sanders with Putin, or worse, accuse him of being aided by Putin’s Russia, again there’s no condemnation from the party poobahs.

For months, as in 2016, the Democratic Party elite and the liberal media that support them, ignored Sanders, but when it looked like he was going to romp through the primaries on the strength of the public’s support for his calls for Medicare for All, free public college tuition and a Green New Deal to seriously tackle climate change, they all turned on him with a vengeance.

The idea that Joe Biden’s victory in South Carolina — a state with so few Democrats that it has never, since Lyndon Johnson’s support for the Voting Rights Act and Nixon’s subsequent “Southern Strategy,” voted Democratic, and that never will again until blacks are no longer obstructed from voting and working class whites realize that they are being tricked by wedge issues like prayer in schools and the abortion issue into supporting a party, the Republicans, that keeps them in peonage — could in any way indicate his “electability” nationally against Donald Trump is laughable on its face. Yet the liberal media collectively ran with this story line, as did Democratic party leaders and key elected officials.

The effect of this full-court press was to convince Democratic voters and the independent voters able to participate in many Democratic primaries, that in order to get rid of Trump they needed to vote for Biden.

Yet Biden, objectively looked at, is a disastrous candidate. A backer of the big banks that most Americans loath, supporter of a bankruptcy “reform” law that makes it impossible to escape credit card debt and that makes it easier for people to lose their homes, the author of the 1994 Crime Bill that has made the US into he most incarcerated nation in the world, with more people behind bars than even the dictatorship in China, backer of the Clinton presidency’s bill ending welfare for most poor parents by putting a five-year lifetime cap on Aid to Families with Dependent Children benefits, and quite likely involved with his son Hunter in corruption in Ukraine, Biden is not going to do any better than Hillary Clinton did in 2016 at luring frustrated and angry white working class voters away from Trump in key swing states like Michigan, Pennsylvania, Ohio and Wisconsin. Nor is a guy who has repeatedly sought to cut Social Security benefits in deals struck with Republicans likely to win support from the elderly that would allow a Democratic candidate to win Florida or Arizona — two key retirement states. As for winning over the millions of younger Americans — college students and millennials —who have flocked to Sanders — Biden can forget it.

The jump in health insurance company stocks the day after Biden’s victory sweep on Super Tuesday is all you need to see to know how well liked Biden will be among the 50-60 percent of Democratic and independent voters in Democratic primaries that exit polls showed support Sanders’ Medicare for All plan.

Maybe if continued polling shows Sanders to be doing better in head-to-head match-ups against Trump than does Biden, voters in the remaining two-thirds of states yet to hold primaries will wake up from their daze or hypnosis and recognize the mistake Super Tuesday voters made handing those states’ delegates to Biden.

But I doubt it. This is a war for control of the Democratic Party, and the DNC and neoliberal party establishment are playing for keeps.

That’s why it’s critical for Warren to join right away with Sanders in a pact to make an all-out drive for victory before the Democratic Convention.  Warren cannot win the primaries at this point. Her appeal to women and some college educated men is peaking at under the 15% needed to even win delegates.  But it is support which, if combined with Sanders’ supporters, and with the excitement that would be generated among progressives by a united front, could yet turn looming defeat into triumph with enough delegates to either win on a first ballot or to come close enough that the Super Delegates would be unwilling to deny Sanders the nomination.

Sanders should make an offer of the VP spot on his ticket to Warren. She should accept it gratefully if it is offered. Not only will they have a great shot at winning the November election as a team, with women going all in for Warren and Sanders pulling in the white working class, but with all Democrats and a majority of independents of all races and economic position coming together to deny the destructive, erratic and frankly crazy Trump a second term.

The contrast between a Sanders-Warren team and the doddering, befuddled and lamely centrist, pro-corporate Biden will be striking.

Not only that, but by Warren, who is just 70 — a spring chicken compared to the 78-year-Sanders (and the 77-year-old Biden) — serving as Sanders’ vice president, the people voting for them would know that the policies a Sanders/Warren administration put into place would continue should anything happen to Sanders while he’s serving his first term, and would have a good shot at continuing for another four or eight years after that under a President Warren.

So enough all ready!  Warren gave this race for the presidency her best shot. She did a great of taking down the plutocrat Mike Bloomberg and helping to drive out Pete Buttigieg, Amy Klobuchar and the other billionaire in the campaign, Tom Steyer.  Now she can be the key to winning the Democratic presidential nomination for the progressive movement by backing Bernie Sanders for the post and urging her delegates and her supporters to back him through the primaries and at the convention.

In so doing, she will also deserve much of the credit, along with Sanders, for winning control of both the Democratic Party and the White House for progressives.