(This article originally written for and published by Counterpunch Magazine)

Maple Glen, PA war zone — Although I have been a journalist now for 40 years, I have, by design, never sought an assignment as a war correspondent. The idea of dodging enemy bullets, avoiding mines, and of course “friendly” fire, has never appealed to me. And yet, even as President Obama is claiming to be having second thoughts about the drone slaughter he has been overseeing from the White House, I find that I am now a war correspondent in a combat zone in spite of myself.

A month ago I learned, courtesy of my congressional representative, Republican Pat Meehan, that my neighborhood, the Upper Dublin and Horsham area of Montgomery County, PA, is being made into a front-line battle zone in the Afghanistan War.

Not that Rep. Meehan put it that way. No. His announcement was that Montgomery and Bucks County were going to get 250 new jobs thanks to a decision by the Pentagon to set up a new piloting facility for killer drones at the currently mothballed Willow Grove Naval Air Station. This new drone piloting facility, like the ones in Nevada and upstate New York, will be flying drones not from the Willow Grove facility’s huge airfield, but in Afghanistan, Pakistan and wherever else America is fighting the so-called War on Terror.

With this decision, the war has literally come home. Two miles from my house, to be exact.

According to a report in the Lansdale Patch, a local weekly, the US Air Force “has chosen the Pennsylvania Air National Guard’s 111th Fighter Wing, located at the 238-acre Horsham Air Guard Station, adjacent to the shuttered Willow Grove air base to take on a new Remotely Piloted Aircraft mission.”

Effective October 1 the Air Force will have established, in already existing buildings on the currently unused base, a ground-control station for the MQ-9 Reaper. This is one of the two drones (the Predator is the other) that have been responsible for most of the drone killings during the Obama administration’s over four-year expanded use of drone warfare, and that has, according to the organization Drones Watch, been responsible for the documented deaths of over 172 children.

Col. Howard “Chip” Eissler, commander of the Pennsylvania National Guard’s 111th Fighter Wing, which had been flying A-10 Warthog ground attack jets from the base on training runs for years until the base was shut down, issued a press release saying, “This is an exciting time for our wing, and our airmen are energized to embrace this new mission.”
Willow Grove's shuttered Naval Air Station, soon to be on the front line of the Afghanistan War and 'War' on Terror

Two-person military teams control each Reaper from a virtual cockpit, with one serving as pilot and the other as a sensor operator. The drones, which carry deadly high-density explosive Hellfire missiles, would not be flying locally, but rather in war theaters or on missions in countries where the US is not at war, but where the Obama White House deems “enemies” to be located.

Left unsaid in the hoopla over the supposed 250 new jobs (only 75 of which would be full-time), is what it means to have combat personnel responsible for killing operating in a densely populated suburb of a major city like Philadelphia.

“I’ll get back to you on that,” a press spokesman for Rep. Meehan said, when I asked him about whether the congressman had thought about the security issues involved in locating a drone piloting operation in Horsham. He never did return the call, or a second one leaving a reminder message.

John Braxton, a leading local peace activist and founding member of US Labor Against the War (USLAW), said “We need jobs, but we need jobs for a sustainable world, not drone piloting jobs. I’m sorry to learn that our region has to play a part in illegal and immoral operations in Afghanistan and Pakistan.” He added, “Morality aside, it certainly doesn’t make sense to put one of these operations in a populated area. If someone decided to retaliate against the drone strikes here, it could cause a lot of injuries and deaths.” Braxton also speculated that while the Pentagon is stressing that no drones will be flying locally from the base’s airfield for domestic purposes, “These things do tend to get out of hand once they get started.”

Charles Rossi, president of the Philadelphia chapter of Veterans for Peace, said, “This is really sad. One of the things that bothers me is that they’re bringing this operation into a very populated area. That’s a major mistake. It’s a terrible, terrible idea. I’m not surprised that Pat Meehan thinks it’s great, but what a lousy idea!”

Most attorneys familiar with the laws of war agree that the pilots of the drones, because they are uniformed military personnel and are pulling the trigger on missiles that are intended to kill people, are combat troops, which will would make the Willow Grove base a “legitimate” target for enemy attack. (The Pentagon made it clear the drone pilots are combat soldiers when it created a special award for those who are “wounded in battle” with such injuries as carpal tunnel or tennis elbow, though under protests from regular winners of such awards, this one was downgraded to below a Purple Heart). As well, because soldiers are soldiers whether they are on duty or off duty and out of uniform, even when those pilots punch out of the job and go home, they are “legitimate” targets.

The exception to this general concensus is expressed by attorneys working for the military. A JAG attorney at the US Command and General Staff College in Leavenworth, Kansas, who declined to give his name, argued that while the base would be a legitimate target in a “declared conventional war” it would not be a legitimate target of the Taliban, since the US does not believe Taliban fighters are “lawful combatants” under the laws of war. This is a controversial view, however.

As Jules Lobel, a professor of international law at the University of Pittsburgh, explains, “What the US has done in the case of Iraq and Afghanistan is collapse two concepts: one is who has the right to fight in war, and the other is what US military personnel and locations are legitimate targets.” He says the US is, rather absurdly, claiming that since the Taliban, while formerly the Afghan government and military, were ousted from power in 2001, they no longer represent a country or a government and thus have no legitimacy. “Therefore if they kill a US military person it is considered murder.” He says the US position is that a Taliban fighter has no legal right even to shoot back in defense if fired upon by an American soldier.

“The US is arguing that in Afghanistan, only one side can legally fight, and this is clearly absurd,” he says. He points out that even if the US position were correct that the Taliban fighters are not lawful combatants, they would retain the right of self-defense, and he adds, “that would apply to attacking people who are controlling drones that are shooting at you.”

David Glazier, a former Naval officer and ship’s captain who is now a professor of international law specializing in the law of war at Loyola University in Los Angeles, agrees with Lobel, saying, “The US position that the Taliban are not lawful combatants and thus cannot legally kill US troops is unprecedented in the history of warfare. What they are saying is that only the US can shoot in Afghanistan, and that’s not an armed conflict. That’s a human hunting expedition!” He adds, “If they really are claiming that then everyone in the CIA involved in the drone killing program, right up to the head of the agency is a war criminal, because they’re not in the military.”

Lobel’s position is also backed by Michael Ratner, president emeritus of the Center for Constitutional Rights. Says Ratner, “We believe that both the Taliban and the people piloting the drones are combatants. The bottom line is that people who are in a shooting war are combatants. So Willow Grove is becoming a front in the war. The Philadelphia area has become a front. Is Willow Grove air base a legitimate target for the Taliban? All I know is I wouldn’t want a drone base near my house!”

Louise Blank, an attorney specializing in the laws of war and director of the International Humanitarian Law Clinic at Emory University adds, “Technically, putting the drone pilots in Willow Grove creates a front line target, since all military sites are legitimate targets in this conflict.”

Blank is right that in some sense, the question of the legitimacy of Willow Grove’s new drone piloting base as a Taliban target is irrelevant. All military bases in the US are potential legitimate targets of an enemy in wartime equally, whether they are actively piloting drones, or just training or housing troops. But as Glazier points out, “The fact that Willow Grove air base would be operating the drones does make it a more attractive target for an enemy.”

That’s a fact that isn’t being considered by the politicians and military brass who are touting the jobs the new facility will be bringing to this suburb just north of Philadelphia. 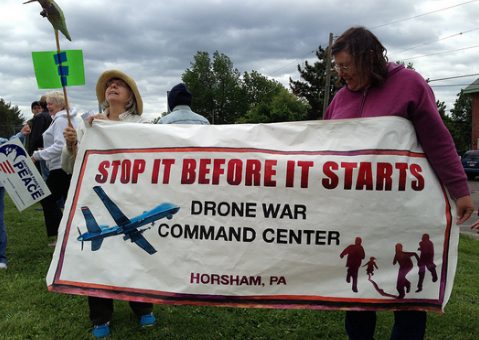 Note: Yesterday, a group of about 100 stalwart antiwar activists (remember them?) staged the first of what will hopefully be many more and bigger demonstrations against this planned facility.