Well, let’s point out that this mention of “institutional racism” comes right after that same press release highlights how Texas school students will now study the ideas of Confederate States’ President Jefferson Davis alongside those of Abraham Lincoln and will examine misconceptions about church-state separation in the US Constitution.

Now, given the rigid-right dictates driving the Texas Board’s revisions, it’s unlikely students in Texas will really receive accurate instruction about the contours of institutional racism in the Lone Star state or other locales around America. Unfortunately, their benighted decisions on what should and shouldn’t be in school history texts also impacts many students in other states too, because the textbook industry doesn’t want to print multiple editions of their expensive books, and Texas is a huge textbook market.

It is unlikely too that students will receive Education Board sanctioned instruction about the May 1916 lynching on the Waco, TX City Hall lawn that was attended by 15,000 spectators, some of whom cut off body parts of the black victim for souvenirs. 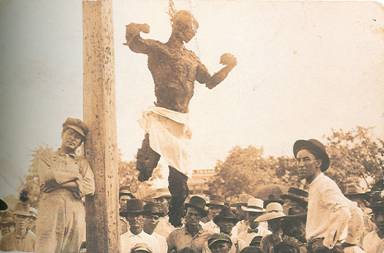 The Waco lynching of Jesse Washington

Texas does have the dubious distinction of having had the third highest number of lynching deaths in the U.S. between the mid-1880s to the 1950s, ranking behind Georgia and Mississippi.

Another unlikely classroom lesson for Texas students and other students unfortunate enough to be stuck with Texas-approved texts: the institutionally racist refusal of Texas’ two U.S. Senators (both Republicans like the Ed Board’s majority) to support the U.S. Senate’s June 2005 apology for that body’s despicable, decades-long failure to pass anti-lynching legislation.

The high court’s June 1951 ruling barring Texas from denying Blacks admission to its prestigious UT Law School was an important decision on the legal road to that court’s seminal 1954 outlawing racial segregation in public schools that hammered institutional racism across America.

The Supreme Court applied the spirit of its 1954 decision in a 1975 ruling striking down a Texas statue denying educational funding to children of undocumented immigrants.

Given the good-ole-days view sought by the Board’s majority it’s doubtful either ruling ranks as Texas history meriting classroom examination.

Evidence of the Board’s ideological bent is obvious in its pushing for lessons on organizations like the Moral Majority and the Heritage Foundation, both of which defend privileges arising from institutional racism, while blotting from classroom review information about organizations like the League of United Latin American Citizens – a group that has challenged institutional racism.

Majority members of the Texas Board are committed to countering what they contend is liberal bias infecting education, like presenting facts in classrooms about minorities having made productive contributions to the “American Exceptionalism” Board members extol.

The Board that wants students to learn about conservative moment icon Phyllis Schlafly blows-off mention of the first Hispanic to sit on the U.S. Supreme Court Justice, Sonia Sotomayor.

Learning about Sotomayor’s historic elevation could inspire the Latino students who comprise 48% of the public school pupils in Texas.

The Texas Board of Education is not the only official body gripped by neo-Neanderthalism when it comes to race and racism in America.

Officials in Arizona recently approved legislation eliminating ethnic studies programs in public schools, a measure that specifically targets African-American studies, Native-American studies and especially Chicano studies in a state where nearly half of the students are Latino.

The claims of Arizona State Superintendent of Schools Tom Horne that ethnic studies promote hate and anti-Americanism are as ridiculous as Texas Ed Board member Don McLeroy contending the civil rights moment led to “unrealistic expectations for equal outcomes.”

The civil rights struggles of persons of color across America seek equitable access to opportunity pledged in the U.S. Constitution, not special preferences as conservatives falsely contend.

Dismissing the racially regressive educational practices in Arizona and Texas as understandable antics of former Confederate States (Arizona issued an Ordinance of Secession in 1861) misses the larger, more ominous reality that on matters of race most Americans prefer the comforting mental massage of myths.

For decades the U.S. National Park Service suppressed information about America’s first president, George Washington, keeping slaves in his official residence then located around the corner from the hallowed Independence Hall in downtown Philadelphia.

Park Service officials defended this suppression of historic fact as not wanting to offend the sensitivities of visitors to Independence Historic Park, who themselves are steeped in the national mythology.

The place where George Washington kept his slaves inside his Philadelphia residence is now, in a grand irony, literally on the doorstep of the pavilion housing the Liberty Bell, that fabled icon named by abolitionists (not the Founding Fathers as the national mythology would have it.)

Knowledge is power…and abundant history proves that what we don’t know about race does hurt us as a nation.

One book that the Texas Board and like-minded conservatives certainly would like banned is Black Power: The Politics of Liberation in America co-authored by Stokely Carmichael, the man who coined the power phrase conservatives find so incendiary.

That small book published in 1967 contains quotes from a southern populist who in the 1890s once urged poor whites to unite with poor blacks against their common enemy: financial despotism. This populist rightly noted that “race antagonism perpetuates a monetary system which beggars both.”

The rich and powerful of the 1890s exploited racism to undermine efforts at interracial unity in order to preserve their position.

Today, as journalist Robert Parry rightly notes, big corporations are pulling a “big con on common folks” – manipulating the rage of Tea Baggers into seeing their enemy as advocacy groups like the NAACP and the National Council of La Raza not Wall Street financiers and mega-corporations that are really beggaring them.

The Texas Board of Education has it wrong. What’s un-American about education is restricting information.