Much like expensive red wines, many Facebook relationships, and Kanye West’s psychological state, the case of Texas House Bill No. 2 is complicated.

Last week the Supreme Court heard oral arguments for Whole Woman’s Health v Hellerstedt, one of the most pivotal cases in abortion law in decades. The plaintiff seeks to strike down Texas House Bill No 2, commonly referred to as HB2, legislation that was passed in 2013. It’s legislation that, under the guise of protecting the health of Texan women, has actually endangered their well being by restricting access to abortion services in Texas.

It will set a dangerous legal precedent if found constitutional. Not only will it impact abortion access, it could change the way we practice all of medicine.

HB2 is the most medically intrusive legislation that has ever been written. It placed several restrictions:

HB2 is like Mylie Cyrus talking about race in America. At first blush her statements don’t seem completely unreasonable, but then you realize that she’s simply hiding her own sanctioning of a racist musical industry underneath a thin veneer of false caring, rainbows, and appropriated yoga mantras.

Similar nonsense is generated when legislators regulate abortion. The areas of expertise that most legislators have are writing rambling documents, shaking hands, and distributing little signs with their names on them. Nowhere in that list is medical care. HB2 is an attack on the rights of women under a thin veneer of false caring and flawed medical reasoning.

Furthermore, it is an attack on every American’s right to high quality healthcare.

Nowhere else in medicine are doctors told by the law exactly how to practice in such detail, and for good reason. Certainly there are quality measures that must be met such as standards around sterility, safety, and first aid, but there are no laws that get into the minutiae of when and how to prescribe a medication. Even when it comes to potentially lethal controlled substances such as methadone, the details of dose and timing is left up to a provider’s judgement.

This is not just an egotistical physician whining over autonomy. The implications are not just about abortion but also about how to practice medicine. Research is improving the way we practice all the time. We need the freedom to change our practices based on the newest research and medical standards in balance with our patients’ preferences about their own bodies. Legislators are not medical providers and their blatant overreach causes physicians to provide substandard care.

Here are the medical arguments that expose the lunacy of HB2:

The first and third sections of the bill create a gestational limitation to 21 weeks because after that, according to the legislators, the fetus can feel pain. The bill states that there is “substantial medical evidence [indicating] that these children are capable of feeling pain.” The ridiculous use of the word “children” aside, I have no idea what medical evidence they are talking about. It’s completely mind blowing that conservatives can continue to deny the overwhelming evidence of global climate while buying into the sham “scientific research” that this bill is based on.

Unlike all other medical publications, the bill did not cite its references so I cannot speak to them specifically. However, the internationally known, peer-reviewed The Journal of the American Medical Association published a comprehensive review of the literature that stated “the capacity for functional pain perception… probably does not exist before 29 or 30 weeks [of gestation].”

The need for admitting privileges depends on the risk of a procedure because if a doctor is going to be sending many patients to the hospital, then it makes sense that they should care for them while there. Abortion is an incredibly safe procedure and rarely do patients ever need hospitalization. It’s only dangerous when access is denied to women and procedures are done covertly. For example, from 1991-1999 in the United States, the mortality rate of legal termination was 0.567 per 100,000 terminations. In comparison, the mortality rate of having a baby is 7.06 per 100,000. Having a baby is far more life threatening. It’s over 12 times more likely to kill a woman. Despite that, in Texas, midwives are not required to have admitting privileges. As long as they have a good plan for accessing appropriate medical services should their patients need them, they’re practicing responsible medicine.

Clearly section two was written not out of the concern for women’s health, but simply to make it more difficult for abortion providers to continue practicing.

In an odd twist of fate, this actually creates a perverse need to hospitalize more patients who have had abortions. Many hospitals require a minimum number of admissions per year to maintain privileges. Abortion is such a safe procedure that hospitalization afterwards is extremely rare. This legislation actually forces physicians to hospitalize some patients every year just so they can keep their doors open.

Section four dictates that “the minimum standards for an abortion facility must be equivalent to the minimum standards… for ambulatory surgical centers.” Abortion is a procedure. It’s not a surgery. In fact, it’s such a simple procedure that many clinics don’t even use intravenous sedation and some only use ibuprofen and lidocaine.

Furthermore, the procedure for first trimester abortion is exactly the same as what is done when a woman is having a miscarriage. If legislators were really concerned about safety, wouldn’t they also require every primary care clinic and obstetrics clinic also meet the ambulatory surgical center requirements?

Forcing abortion centers to meet ambulatory surgical center requirements was not written with the intent of protecting the health of women. In fact, by enacting this unnecessary requirement it increases the cost of the procedure, which then either causes clinics to close, or increases the cost for the patient, making things more difficult for the very people that this bill is purporting to protect. 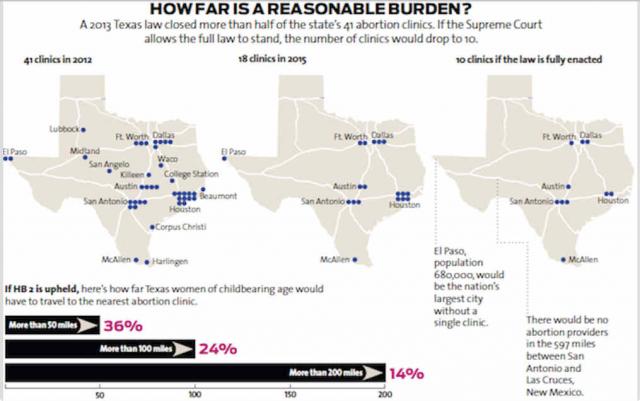 Section three not only impedes on the rights of women, but also the rights of all people to receive the highest quality, evidence-based medical care. In this section, it requires that should physicians provide an abortion through the use of medications, the medications must be given exactly as it was approved by the FDA.

Mifepristone, one of the two medications given, was approved by the FDA in 2000. We have done over 15 years of research since then. By restricting the usage to the research that we had in 2000, women in Texas can only get medical abortions up to 7 weeks gestational age when the widely accepted current standard of practice is that it’s effective to at least 9 weeks.

What’s even more offensive is that women have to return to the clinic a second time, 24 hours after taking the mifepristone, to get the second medication in the protocol, misoprostol. This is because during the original research a physician dispensed the misoprostol. This is frequently done in a research setting where stricter observation is required in ordered to assure accurate data.

Whereas in other states women are simply given the misoprostol and instructed on how to take it, Texas legislators believe that women are so stupid or so irresponsible that they cannot be trusted to do it on their own. That means that in Texas, to get a medical abortion, a woman must go to the doctor’s office four times. In comparison, in Washington state, a state where there is not a 24 hour wait period and this ridiculous misoprostol rule, women only have to have two clinic visits. Given that many women travel over 100 miles to access abortion services, this is quite a burden.

Even beyond the impact that this legislation has on a woman’s right to healthcare, there is the implication it has for all of medical care. Allowing legislators to dictate how we use medications is incredibly dangerous. Every person deserves to receive the most up-to-date medical care. After the FDA approves a medication, research continues, and often FDA guidelines are not updated due to the cost of the application process. Instead, when a different use of a medication has garnered enough evidence, physicians change their practice.

For example, in the past few years the way we understand diabetes and cardiovascular disease has changed dramatically. When the first statin, the most common cholesterol medication, was released decades ago it was for high cholesterol only. We now know that we can safely prevent scores of heart attacks by giving them to patients who have risk factors for heart attack, such as diabetes, even if their cholesterol is not high. However that use of cholesterol medication is not necessarily approved by the FDA.

There are a countless number of ways that medical providers improve the quality and length of life for patients that are the standard of the medical community but that are not necessarily approved of by the FDA. Texas legislators are essentially forcing physicians in Texas to provide poor medical care. What if they don’t stop at abortion?