A staggering 168 people, 12 times as many as those killed earlier this week in San Bernardino, and including a whole daycare center class of 15 little children, were killed by a crazed terrorist in the 1995 Oklahome City truck-bombing of the Murrah Federal Building. The killer, Timothy McVeigh, was a right-wing Christian fanatic who wanted to avenge the killing of a bunch of Christian cultists in Waco, Texas by federal agents two years earlier. His accomplice Terry Nichols had the same deranged goal.

Although there are plenty of right-wing and fanatic Christian nut-jobs in the US, somehow Americans get on with their lives and don’t worry over-much about being the victim of one of their attacks, though they happen often enough. Just recall the slaughter earlier this year of nine parishioners of the Emanuel African Methodist Episcopal Church in Charleston, South Carolina by 21-year-old white supremacist Dylann Roof, who was hoping to ignite a race war, or nut-job Adam Lanza, who killed 26 people — 20 of the schoolchildren, in the Sandy Hook School massacre.

Such terrorist killings in the US are actually pretty common, sometimes involving just one victim, as in the case of the murder of Dr. George Tiller, an abortion provider in Kansas shot point blank in the head by a Christian anti-abortion wacko as Tiller stood handing out programs in the foyer of his church. Maybe such terrorist actions are not as common as run-of-the-mill mass slayings by people who simply slip a cog when life gets too hard for them and — America being the land of the almost free gun –they grab a weapon or two and some boxes of cartridges from the local gun shop, and go out to cause mayhem en route to a suicide by cop, or by their own bloody hand. But they’re frequent enough.

Given this uniquely violent American reality, why has everyone gotten so freaked out by the San Bernardino shooting, in which only 14 people were shot, or for that matter by the Boston Marathon bombing, which killed just three people (admittedly seriously injuring dozens more)?

Awful as this latest mass killing is, and these earlier ones, let’s admit that as far American mayhem goes, they have not been particularly big deals.

No, the thing that has people, at least in the media and in the national police state, all worked up is that this time (as in the case of the Boston bombing, where one wounded kid on the loose led to a city-wide martial-law military lock-down), the killers are Muslims — and immigrant Muslims at that. Somehow that makes it much scarier, even though the San Bernardino killers (and the Boston bombers) were not nearly as proficient at killing as McVeigh and Nichols or even Roof. Hell, McVeigh researched and figured out how to make an exploding truck that was heard 50 miles away in all directions and that took down a nine-story building! Lanza slaughtered 26 people all by himself, and even the inept Roof managed to kill nine people on his own. 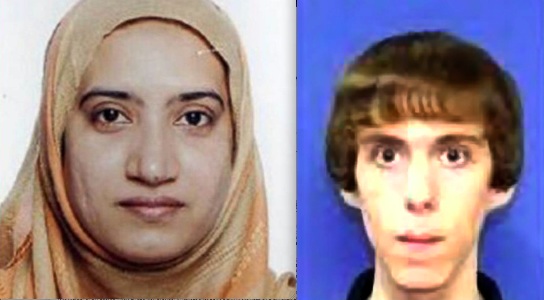 Tashfeen Malik, terrorist killer of fewer than 14 people, Adam Lanza, not a terrorist, killer of 26 people, including 20 small children

But they are Muslim terrorists, which nonetheless makes them much more scary and dangerous, apparently, than McVeigh, Nichols, Roof and Lanza put together.

Now I know some people are going to say, “Yeah, but Muslim terrorists destroyed the World Trade Center twin towers and attacked the Pentagon, and killed nearly 3000 people.”

Okay, that’s the story line, but if we Americans really cared about that particularly heinous act of terrorism, we’d want to know how the hell it happened. Certainly we would be demanding that the US government release those sealed 28 pages of the 9/11 Commission’s official report which deal with the role of America’s ally in the Middle East, Saudi Arabia, which is known to have funded many of the alleged hijackers of the four planes involved. We haven’t done that. It’s still blacked out. We would also be demanding to know why the FBI lied at that commission hearing claiming that the black boxes of the two planes that hit the two towers were “never recovered.” The truth is that a number of people, including police and firefighters working in the rubble, saw those boxes found and removed from the debris and hauled away in government vehicles (of course they did! those boxes are indestructible and even survive head-on plane crashes!). I myself was was informed by a source in the National Transportation Safety Administration — and reported in Counterpunch magazine, and in my book The Case for Impeachment (St. Martin’s Press, 2006) about it — that the four black boxes from the WTC planes had all been brought first to the TSA, and were then confiscated by the FBI. No one has questioned the FBI about this to this day. And finally we’d be demanding for an open Congressional hearing into the case of the Mossad agents who were observed and reported filming and celebrating the Twin Towers attacks as they happened — clearly showing they had foreknowledge that the attacks were a terrorist action — and who were later arrested by alert New Jersey State troopers, only to be released and allowed to leave for Israel under pressure from the US State Department. (This isn’t some crazy conspiracy theory — it was reported in the New York-based Jewish Forward and on ABC. Read the story about them here.)

Instead, following 9/11, we Americans have accepted a clearly false story line, have not demanded that anyone in the government be prosecuted for, at a minimum, dereliction of duty, and have surrendered most of our vaunted liberties — freedom of speech and assembly, freedom from warrantless searches, the right to a trial by jury, the right to confront our accusers, freedom from excessive bail and a ban on cruel and unusual punishment, to the point that now nothing we say or do is safe from government spying and monitoring, and if the government wants, it can simply accuse us — in secret! — of being supporters of terrorism and then spirit us away to a secret prison, or even kill us. Actually, the only Constitutional right we have left is the supposed right to buy just about any gun we want.

We’ve also accepted, submissively and with little question, the morphing of our local, state and national police forces into paramilitary organizations populated all too often by thugs, racists and psychopaths with guns and a willingness to use them, even for minor issues like parking violations, walking in the street or simply standing while black.

Today’s America: A white Minneapolis cop trains a shotgun on Jeremiah Ellison, son of US Rep Keith Ellison (D-MN), as the young man simply exercises his First Amendment right of free speech at a constitutionally protected rally held by Black Lives Matter protesting the recent killing by Minneapolis police of an unarmed black man. (Rep. Ellison is one of two Muslim members of the US Congress) Note that young Ellison is holding his hands in the air in the now familiar Black Lives Matter gesture, demonstrating in the process that he poses no threat and has no weapon.

This surrender of our collective sanity did not happen because of the domestic terrorism and gun mayhem that has occurred in the US on a weekly or seemingly almost daily basis for as long as there have been nuts with guns. It happened because a few of those nut-jobs in recent years have been, instead of mostly whites and Christians, dark-skinned Muslims, or at least people claiming to be Muslims.

The famous quote from Martin Niemöller, a protestant pastor and social activist in Germany, to explain how the Nazis were able to rise to absolute power in the country of Goethe, Beethoven and Rosa Luxembourg, is instructive for us in the US today. He said:

As a nation and a society, we’re working our way down that dangerous slope today.