ThisCantBeHappening! just into its fourth year of publication, has learned that we have won our fourth Project Censored Award, this time for Dave Lindorff’s article Incidents raise suspicions on motive: Killing of Journalists by US Forces a Growing Problem, published in TCBH! on Nov. 22, 1012.

In a press release headlined The News that Didn’t Make the News, announcing release of this year’s book on the year’s most censored news, Censored 2014, Project Censored writes that the Committee to Protect Journalist had noted that the killing of journalists had risen 40% in 2012 over 2011, and had published a risk list of the most dangerous places to work as a journalist (Brazil, Turkey, Pakistan, Russia, and Ecuador topped the list), and went on to say:

“The New York Times ran a story on the CPJ report on February 15, 2013, noting the alarming rise in the number of journalists killed and imprisoned during 2012. However, the Times’ report did not address the possible UN resolution or freedom of press as a transnational right.

“Dave Lindorff, of ThisCantBeHappening!, writes that ‘the incidence of journalists killed by US forces in recent US conflicts has been much, much greater than it ever was in earlier wars, such as the one in Vietnam, or in Korea or World War II,’ begging the question of whether some of the deaths have been ‘deliberate, perhaps with the intent of keeping journalists in line.'”

We’re proud to be operating a collectively-run news organization that, despite its small size (just a crew of seven) and limited resources (our annual budget approaches $4000!), we are averaging one Project Censored award per year, so far. 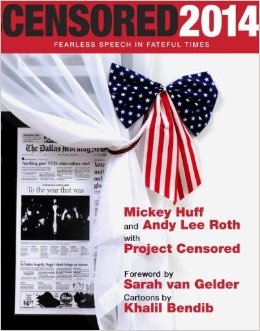 TCHB! wins a fourth Project Censored Award, and publication in this year's list of the top 25 censored stories of 2012-13 (click on image to buy the book)

The big corporate media win the Pulitzer prizes — generally for pieces that safely stay in the area of exposing crimes that are not systemic, but that violate the rigged rules of the game. Project Censored awards instead are going to journalists and journalistic outfits that are reporting on the crimes of the system itself.

We know that this is what you, our readers, have come to expect from TCBH!, and we plan to continue doing exactly that.

We do want to point out one important thing though: Unlike the Pulitzer, the Project Censored award doesn’t come with a check.

What we need from all of you readers out there is both help with getting the word out (Please remember to make a habit of using that “send by email” button at the bottom of each article of ours you read, to alert friends and colleagues, and people you don’t agree with too, about us), and financial support. So please use that “Donate” button up on the top right of the home page, too.

It takes a lot of time and hard work to do what we’re doing, and we’re not getting paid for it. It’s not that we want to get paid for our work. That’s not the point. But if all our readers would just donate $5 each once a year, we’d have enough money to be able to work half or maybe even full-time on TCBH! instead of all of us having to work in the corporate media world or the university in order to keep food on the table.

Imagine what we could be digging up and reporting on if we had that kind of time to devote to ThisCantBeHappening!. With more backing from our readers, we could really be “a major destabilizing influence.”