I am 62 and have just reached the age where I could apply for Social Security retirement benefits. Of course, I’d be crazy to do that and collect some $700 a month for the rest of my life, when I could keep working and wait until I’m 70 and get $2000 a month.

But the point is, I’ve arrived. I’m a “senior.” And now I’m paying a lot more attention to what the Right and its paymaster, the corporate lobby, are trying to do, not just to my retirement plan (which is Social Security. period), but also to Medicare, the program upon which my medical care will depend once my wife decides to retire from her university job.

The picture is not pretty. Both the Republicans, and the pathetic Democrats, led by President Barack Obama, are talking brazenly about cutting back on Social Security, and on Medicare. The Republicans openly say they want to kill Medicare and secretly want to end Social Security too, which is the agenda of most of the corporations which fund lobbies like the US Chamber of Commerce, the National Assn. of Manufacturers, the Business Roundtable, etc. Oh, I know they say they’re only talking about “changes” for people who are under 55, but that’s just for starters. The goal is to ruin the program for younger workers, and then make them resent what we older folks still get. Then the next step will be to eradicate both programs altogether.

But here’s the thing. The reason these parties and lobbies are trying so hard now to use the recession and the national deficit as cover to decimate and destroy these two proven and critically important social programs into which all working Americans have been paying all our working lives, is that they realize what most 50 and 60-something Americans haven’t realized yet: that we are about to become the most powerful political force in the country, and that we are certainly going to demand both an excellent government Medicare program, and a decent retirement program. 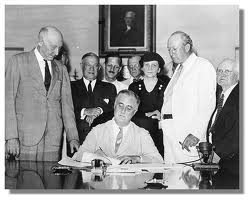 The way I see it, we in the Baby Boom generation–those people born between 1946 and about 1964–are just starting to hit retirement age. In another 10 years, we will become a political force twice as powerful and certainly more than twice as noisy and demanding as the current senior lobby. We can either wait until then, after they have successfully gutted the two programs we depend on, making it so we have to fight to recreate or restore them, or we can start organizing now to defend and improve them, and save ourselves a whole lot of trouble.

So here’s my proposal.

Here’s my idea for a slogan:

Tax the Rich and Save Social Security! No Cuts in Medicare! Make it for Everyone!

Here’s the argument. Social Security is said to be in danger of “running out of money” in 2037, because there will supposedly be too many retirees drawing checks and too few younger workers putting money into the so-called Trust Fund. The Trust Fund itself had its trust broken by our politicians, Republican and Democrat, who have for years been raiding the money we put into it, leaving us with government IOUs. These IOUs, the Republicans and the corporatists now say, they don’t intend to honor. (The main reason for these raids has been to fund America’s imperialist wars, which the public never would support if they had to pay for them up front through higher taxes.) Well, first off, we need to demand that they honor those IOUs. Second, since that would mean raising taxes to fund our retirement, we need to demand that the money come not from our working kids and grandkids, but from the rich. It’s really an easy fix. Require that the FICA tax which pays for Social Security benefits apply to all income, not just the first $106,000 of income, and make it also apply to investment income, which currently pays no FICA tax. (I’m not talking about retirement investments. They can be exempted. I’m talking about regular taxable investment income.)

As for Medicare, which we’re told is going to run out of money sometime before 2017, the answer there is to stop making it a program just for disabled and old people, and to expand it to cover everyone, which is what President Obama should have proposed way back in 2008, instead of the outrageous health “reform” that was pushed through Congress and which is going to be undone by the courts anyhow.

Poll after poll shows that Americans love Medicare. It’s a program that works, that only spends 1% of funds on administration (compared to almost 30% for the private medical system), and that has vastly improved the health of older Americans since it went into effect in 1965. It’s a program that actually is very similar to what all Canadians have (which is a program they also call Medicare), but here in the US you have to be either over 65 or permanently disabled in order to qualify.

The truth, which our politicians are loath to discuss (both houses of Congress refused to include a discussion of a Medicare-for-all option during the health “reform” legislative process, and the Obama White House refused to bring in Medicare-for-all advocates to its planning sessions, or to invite experts from Canada to explain their program), is that a universal Medicare program in the US would provide care for every citizen, while costing significantly less than our current outrageous mix of private insurance for most working Americans, Medicaid for the poor, Medicare for the elderly, Veterans Administration care for veterans, and no care or charity care for tens of millions of poor people.

Think about it: right now the program funds the oldest and sickest part of the population. As it is, 90% of the cost of Medicare is for the care of the oldest 10% of the Medicare population. It doesn’t cost that much to care for the “younger old.” It would cost even less to provide medical care for the rest of the population that isn’t even 65 yet. And covering everyone with Medicare would mean that Medicaid, Veterans care, charity care, employee disability insurance, etc., could all be eliminated, along with all private medical insurance!

We “new oldsters” need to demand Medicare-for-All not just because it’s right, and not just because it’s the most efficient, cost-effective solution, but also because it makes strategic political sense. Why should we let the Right divide us by creating a bogus generational conflict? Why let them claim we “greedy codgers” are making younger workers pay for our health care? We don’t want that anyway! Those younger workers are our own kids and our grandkids! They should have access to decent affordable healthcare too, and shouldn’t be bound to their employers like serfs, or forced to pay extortionate premiums to vulture-like insurance companies in return for problematic coverage. We should demand that they get the same thing we get: Universal health care! Medicare for All!

Such a campaign for secure retirement income and for a program of government health insurance for all could become the rallying point for a resurgent progressive movement that could grab back our politics and our government from the narrow special interests that have hijacked them.